Will There Be an Arnold Classic Upset? 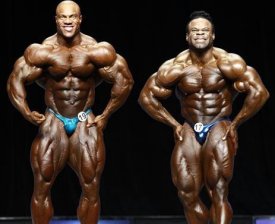 It’s hard to believe we’re less than 2 months out from the 2014 Arnold Classic. Last year’s show was a bit of a bust for industry standards, but by all accounts fans and experts are anticipating a huge rebound this time around. A season ago, Dexter Jackson had a relatively easy sparring session against an entirely overmatched lineup of bodybuilders, on his way to a 4th and record tying Arnold championship. This year’s show won’t see Jackson ‘Strive for five,’ but we will see a deeper lineup with a couple heavy favorites and several more nipping at their heels for what should be a classic showdown in Columbus.

In order for there to be an upset, it’s important to establish who the odds on favorites are to win the show. Every expert in the industry would be a fool not to choose Dennis Wolf or Shawn Rhoden to take the contest. Both are white hot coming off 3rd and 4th place finishes, respectively, at the Mr. Olympia. Wolf has placed 2nd at the Arnold twice, coming up short to Branch Warren in each runner-up, and Rhoden already has an Arnold Trophy on his mantle by winning the Spain show back in 2012. Make no mistake about it; both are hungry for a major title to their resumes. If Wolf or Rhoden come out victorious, leave little doubt that they will have earned it; not only battling against one another, but from a possible upset in the next tier of bodybuilders.

There are four big names, but even bigger bodybuilders that might seriously contend with Wolf and Rhoden: Roelly Winklaar, Cedric McMillan, Evan Centopani, and Ben Pakulski. If you haven’t figured out the trend to this year’s show it is MASS. Take out Rhoden and 5 out of my 6 top bodybuilders at this year’s Arnold Classic are considered mass monsters by today’s standards.
Winklaar finished highest at the Mr. Olympia after coming in 7th place, but he also didn’t have to stand next to Ben Pakulski, who opted to take the show off after having a hernia operation earlier in the summer. Then there’s Evan Centopani who is always a candidate to win a show of this caliber, but he may run into trouble if asked to stand next to an athlete packing a much larger “wow-factor” punch in Dennis Wolf. And of course, last year’s goat, Cedric McMillan. I’ve never seen a fan base go from hot to cold quicker than McMillan’s did a season ago. But that was last year and now he gets a fresh start in 2014 to redeem himself for the blunders of a year ago.

The two guys I see making a serious run at the title out of my tier 2 are Ben Pakulski and Cedric McMillan. Pakman is a ticking time bomb for success in the IFBB. He’s always going to have the freakiest legs on stage, this is a given. And he’s always going to come to a show in shape. He’s too neurotic in his methods to have soft glutes. His Achilles heel has always been his upper body. Obviously, this isn’t a surprise to bodybuilding fans nor Pakulski, but the fact remains, once the size is put on his upper half, it’s game over for just about all comers in the IFBB. Has he done it since we last saw him? My suspicions are yes, but I have my doubts that it still won’t be enough. Ben hasn’t competed since the Australian pro back in March, giving him a full year off to grow. He’s been sharing trade secrets with John Meadows this fall and winter, so between the two, you would like to think they’ve solved the algorithm for Ben’s upper body. We’ll have to wait and see for the improvements.

McMillan on the other hand is the wildcard. He could be as impressive as Big Ramy was at last year’s New York Pro or he could end up looking like Jason Huh at a guest posing. How Cedric looks is entirely up to him and what goes on between his ears. He had all of the hype going into last year’s show and let it get the best of him. He even paid homage to Arnold during his Finals posing routine. If and it’s a big if, Cedric was willing to sacrifice through Thanksgiving, Christmas, and New Year’s, then I think he could win the whole thing. The time he actually brought the goods to a contest he looked more aesthetic than Rhoden and bigger than Wolf. The trouble is the last time we saw him look even remotely close to his potential was when he earned his pro card back at the 2009 NPC Nationals. McMillan needs this victory as bad as anyone in the IFBB.

With no returning champ there’s a vacancy at the top. Politics shouldn’t play a role in determining the outcome since the only competitor with a win here is Branch Warren. Warren shouldn’t make a big impact at the contest with his aging and ailing physique. By all accounts, this is going to be one of the most competitive Arnold’s in recent memory!