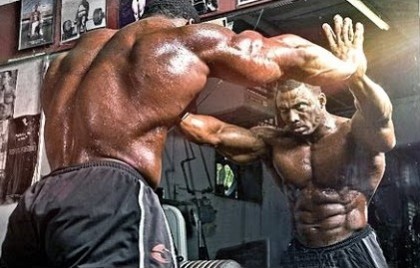 We all have our own story as to how we found ourselves addicted to lifting weights. Whether you were always mesmerized by action heros and wanted to look like the stars you saw filling up the screen with muscle (back in the day, of course, as today any real musculature is considered “too much”) or perhaps you simply thought it would help you attract the opposite sex. Some people find themselves grossly out of shape and through the process of losing weight and trying to become a healthier person in general they slowly start to find themselves gravitating towards the muscle building efforts and then it takes over.

It’s very common to hear people talk about their beginnings in bodybuilding being rooted in a childhood being bullied or at least feeling insecure due to appearance or just not fitting in. It’s almost as if they pile on slabs of muscle as some kind of meat shield to protect them from the judgement of other people, in hopes that they will show the world how strong they can be and how powerful they can become. While this is certainly a healthier alternative to feeling sorry yourself and harboring inner loathing or even worse turning to other addictions, some could argue it is just a defense mechanism and doesn’t address the real problem at it’s core.

What motivates you? Is every rep and every set an attempt for revenge on someone in your life who treated you poorly? I think this is more common that we openly discuss, and even if it is not the driving force behind your entire dedication to building your ideal physique I believe more people fall on this for motivation than are willing to admit, at least to some degree. There is certainly an underlying “I’ll show them” theme to a lot of bodybuilders stories. Even when asked a lot of bodybuilders will deny that it is based in their ego or insecurity, or desire to prove a point – And then when discussing why they got started the story becomes a lot more clear.

Now of course, not every bodybuilder is out for redemption. Many come from an athletic background and either found limited success in the sport of their choice or became more infatuated with the training in the gym required for their sport than the sport itself. These guys tend to be the more genetically gifted ones who bodybuilding because they are good at it more so than feel that burning necessity to do it.

What makes YOU punish yourself on a daily basis day after day, week after week, month in and month out? For myself it was never viewed as an athletic endeavour, or healthy method of competition. It was an absolute disgust with mediocrity or lack of progress. I think most serious bodybuilders have some level of disdain for moderation and fitting in, or doing anything to the normal standards of society. Every day that I do the things I know I need to do to improve is a good day, and conversely if I even miss one notch in the plan for the day it can’t help but feel like a failure.

If you are never satisfied with even your best effort and always feel you could be doing more, you are not alone in the world of bodybuilding. This mindset can be your best friend but also your worst enemy, so try to enjoy the journey during the process of never being satisfied.