We Are Asking Too Much of our Champions 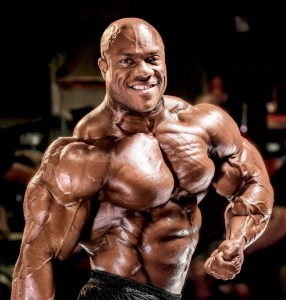 “Ambassador”. Not necessarily a word you think of when you start lifting weights in a garage or school weight room and envision your future as a bodybuilder. Every aspiring lifter visualizes growing to an unthinkable size of ripped mass and the ones who plan on competing picture themselves winning trophies and being on the front of magazines. While signing autographed photos might in some bodybuilders long term dreams, it’s very rare for most to really understand the amount of weight placed on those at the top of the sport.

It can sound romantic to have huge lines of fans waiting just to shake your hand or tell you how much they look up to you, but do we, as fans, ever really put ourselves in the shoes of the star athlete? It could definitely be considered an extreme case of “first world problems”, but doing 14 hour days standing on your feet and travelling thousands of miles in between destinations to do so, is not exactly on the short list of activities that can make you a better bodybuilder.

At this years Mr.Olympia competition which we just recently witness, a few things stood out to me. First off; Phil Heath showed zero improvement over previous years performances and if anything it could be argued it was his worst Olympia winning appearance. He showed signs of his usual greatness, but there was no body parts that were entirely improved (although none really needed it) and during most of pre-judging looked flat and deflated. He didn’t appear as crisp as he has in the past, and he had trouble controlling his midsection at times. Now, when you bring a package like he did in 2011 it could be argued that you set your future self up for failure, as that physique is widely considered one of the greatest to ever grace a stage. But what has changed since 2011? Phil improved dramatically year by year as an amateur and every single year as a pro until he defeated Jay Cutler in 2011 (and deserved the title in 2010, in my opinion). Let me ask you a rhetorical question; If Phil hadn’t won the Mr.Olympia in 2011 (or any year after) and was still hunting for it playing challenger, do you think his body would have showed the exact same progression (if you call it that) that we have seen since?

While many like to pretend Heath is disliked by most fans and not very popular, that is simply online jibber jabber. The bodybuilding world stretches far beyond the main 3 or 4 forums and there are hundreds of thousands of fans worldwide who worship these professional bodybuilders without the cynicism we see in our little online cult. Phil travels the world for the better part of the year making appearances, and with his newly launched supplement line there begs the question how much progress could one possibly make living such a demanding lifestyle? He has made comments that sometimes he has to train at 1 A.M. or dine out at restaurants just due to how busy he is. While that versatility is definitely a trait needed to play damage control, perhaps the lifestyle is not conductive to continuously bettering yourself. I know from my own low-level bodybuilding that my body only truly makes changes when I follow a structured and calculated plan of attack and I can only imagine when you are already at such an elite level that the requirements for improvement are that much higher. Having to head to the gym in the middle of the night after getting off a flight and then having to wake up early to do a guest spot on a local sports show is a far cry away from the eat/sleep/train mentality that most apply to their life to see the greatest gains.

Kai Greene has earned a reputation as “The People’s Champ”, and anyone who follows “The Predator” on social media can tell he is making a valiant effort to remove the outcast stigma he had hovering over him and become much more accessible to fans across the world. It’s been rumored he has enlisted the help of a management agency to help him get more exposure as well as assist in scheduling. Similar to Heath, Kai Greene showed up at the very recent Olympia looking good – but not as good as he has. Although his condition was good enough and at least better than last year, he just had a tired appearance to him. His muscles didn’t pop in certain shots, and although by all judging criteria he looked “great”, his body didn’t impress like it used to when he was really on. Him and Heath just lacked their usual wow factor, and from my perspective all the excitement for this battle evaporated once I saw them posing and neither looked as good as they should have. Considering these guys only compete once in a calendar year, we cannot claim they are burnt out from participating in too many competitions. The burnout must come from their schedules, and trying to embrace their ambassador role.

We have seen it with almost every champion who has a long string of victories. Arnold was notoriously down in size in 1975 for the film Pumping Iron, as he actually already decided to pursue acting instead and was talked back into doing the Olympia. In 2003 we saw a mutated alien in the form of Ronnie Coleman, but it took him losing a show to Gunter Schlierkamp midseason to light the fire under his ass and buckle down for domination. Before that year, it can easily be contested that Ronnie’s best form was 1998 or 1999. He was an extreme underdog in 1998, placing out of the top 6 the prior year, and showed up in his best form. After a year or two on the top, we saw a lack of progression and even slight regression until the Gunter incident. It’s also relatively common belief that 4 time Mr.Olympia winner Jay Cutler was in his best form in his younger years chasing Coleman. His 2001 showing is still most commonly cited his best, and he never looked nearly as good as he did there until Dexter Jackson took advantage of a declining champ and forced Jay to get back to basics – Showing up in 2009 with immense size and granite conditioning.

Analyzing the career curves of each household Olympia winner in the post Haney era shows pretty decisively that one a Mr.Olympia achieves the crown he rarely improves until someone smacks them in the face with the reality check, and they are forced to go back to the drawing board. The only one who defied this pattern was 6 time champion Dorian Yates, as he continued to grow and improve each year (If you remove the visual distraction of his injuries). Although his 1993 was often cited as his best overall combination, he did continue to bring a bigger package and extremely consistent conditioning and his physique only regressed in the form of him tearing muscles due to doing what needs to be done. The difference in his approach? Dorian remained living in England and really avoided all of the “ambassador” responsibilities. When I look back at a bodybuilders pictures and videos, I don’t care how many babies they kissed. I feel we put way too much pressure on whoever is the champ to somehow carry the entire industry. The fans are the first to complain when the champ doesn’t make himself accessible enough but then will be right there to criticize him when he doesn’t show up 5lbs bigger and leaner than the previous year.

Let’s end this ambassador bullshit and let them worry about that after they retire; There will be plenty of time to shake hands overseas after they have collected a half dozen titles. I don’t want to see another Mr.Olympia like 2014, and I fear if we keep pushing the athletes to try to behave like celebrities we are contributing to the decline of competition. Let the bodybuilders do what they originally set out to do – build their bodies.