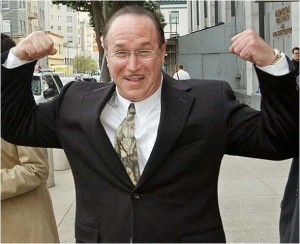 I have found myself changing views on a variety of subjects throughout my life. That is just how things go. You live, you learn, and grow from experiences. When someone learns from a bad experience or wrongdoing and decides to change things, this is generally viewed as noble. I think it is human nature to be hypocritical at times, but when someone’s life is based around hypocritical views, their character can certainly be questioned.

On September 3rd of 2003, federal agent Jeff Novitzky, who is part of the Internal Revenue Service/Criminal Investigation Division, walked into the front door of Balco Laboratories with a search warrant while 20 more federal agents followed behind. Once inside the lobby, Novitzky saw Balco president Victor Conte along with vice-president James Valente standing by a fax machine. Both men were ordered to make their way back to the lobby and have a seat. After this time Conte and Valente were both told that they were not under arrest and they were free to leave, but they were given the opportunity to speak with authorities if they chose to. According to Novitzky, after about ten minutes of his agents being there Conte agreed to talk, even though he was advised he had the right to leave and not cooperate.

Novitzky and his agents combed through the 21 rooms inside BALCO and seized some of the items that were listed on the warrant. The items listed on the search warrant that were not found at BALCO during the raid were located in a private storage locker, and federal agents were brought to light of this by Victor Conte himself. He agreed to ride with agents to the storage locker, and this is when he gave them consent to search. Various anabolic steroids, HGH, and EPO were found in the locker. Conte claimed that he was a heavy steroid user and that all of the steroids, HGH, and EPO at the storage locker were his, and everything seized at Balco were given to athletes. This locker was owned by Conte only and this means blame could not be passed off on other Balco employees, so personal use was claimed. Before leaving the storage locker, Conte pointed out files that were not originally seen by the agents. These files contained information on all of the athletes that he had worked with. At this time Conte seemed to believe that this list of athletes was his ace in the hole.

Victor Conte was initially represented Troy Ellerman for legal counsel. Ellerman continued to represent Balco vice- president James Valente, but Conte would end up hiring attorney Robert Holley to finish out his legal proceedings. Troy Ellerman would end up serving a 30 month federal sentence for leaking sealed documents to reporters about athletes in an attempt to shine a light on the athletes that used performance enhancing drugs supplied by Balco. It is thought that this was an attempt to shift the spotlight towards the athletes and away from the suppliers. This tactic was not successful.

Conte’s attorney Robert Holley wrote a letter to then President George W, Bush asking for leniency for Conte in return for Conte revealing details about officials, coaches, and athletes. There is no doubt that Conte revealed some very detailed information regarding the athletes that visited Balco, but this would not be enough to avoid a prison term. Victor Conte would serve four months in prison and four months on house arrest. Upon his release from prison Conte would set out on a crusade to shine a light on athletes and coaches that he believed were using anabolic steroids and various other performance enhancing drugs. He has gone as far as criticizing The World Anti Doping Agency, Major League Baseball, and other sports organizations, stating that there are major loopholes in drug testing. Are there loopholes? Absolutely, but that is not where my focus is here. My focus here is on a man that made a living supplying performance-enhancing drugs to professional and top amateur athletes. Conte initially had an idea on how to make sure his athletes tested clean, and he would gather information on the testing frequency of his athletes and their teammates. This was information that he used to further his ability to understand how to avoid testing positive while using performance-enhancing drugs. As with the list of athletes that used the drugs he supplied, the testing frequency would be another piece of information that would be used for a completely different purpose once arrested and prosecuted.

You often see a drug addict that will change their lives after living a destructive life, which sometimes ends up with prison time being served. Now, when I say drug addict, I am not talking about anabolic steroids, I am talking about mind-altering drugs such as heroin, cocaine, or methamphetamines. These drugs have been known to cause a person to end up with wreckage that will follow them for many years to come. It is often noble for a person that decides to stop using these drugs to help other people make the same changes they have made. It would seem ridiculous for this same ex-drug user to try to help a drug-testing agency to catch people that are still using these drugs instead of helping them. This seems ridiculous when we are talking about mind-altering drugs. These are drugs that tear families apart and have been associated with violence. Victor Conte is this ex-drug user (supposedly)/dealer, but instead of crack cocaine, we are talking about anabolic steroids. This is a class of drugs that are not mind-altering and are used to improve performance and image in health conscience people. So his crusade that comes after his release from prison is not to help anyone, and really not to clean up sports as he has claimed at times.

Since being released from prison, Conte claims to be ESPN’s #1 Sports Scientist. He has asked to meet with WADA (World Ant-Doping Agency) and MLB in hopes of being apart of them changing their drug testing protocol. Conte knows first-hand how rampant performance enhancing drug use is in all sports. He knows how relaxed drug testing is and he made a living at one time because of this. Things have turned, and now that he has been convicted of supplying these athletes, he knows there is no way to make any money on the side that he was once on. Victor Conte has shown that he loves to be in the spotlight. Like a moth to a flame, he seems to gravitate towards the camera when there is some type of scandal involving an athlete and performance enhancing drugs. Conte does make a living with his supplement company, but I doubt his company would have much credibility if he weren’t working the other side of the street like he is now. Conte once supplied athletes with anabolic steroids on a pretty large scale. He knows that these drugs were not destroying lives or killing people, and I really don’t think that he thinks that he was doing anything morally wrong, even though laws stated otherwise. He has decided to turn the table and target people that are still in the world he once lived. If that isn’t hypocritical, I don’t know what is.