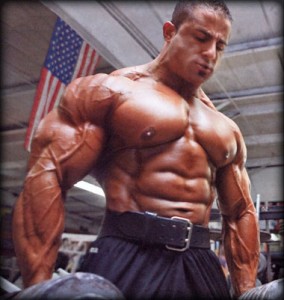 The saying, “There’s no such thing as over-training, only under eating,” might be the most overused cliché in all of bodybuilding. If there’s one thing I’ve observed, it’s that most people don’t train hard enough, but eat way too much. And because of this, it’s always strange to me when I hear a bodybuilder has a hard time eating enough food throughout the day. The same guy spins his wheels further by staying in the gym too long and what do you know? He’s over trained. How is every other type of person in America able to shove food down their throats and stay out of the gym, and our over trainer seems to have found a way to do the opposite on both?

The proof is in the pudding is how the saying goes. Eating is simple; eating clean is hard. Training is simple; training intense is hard. Ecto’s and meso’s that find themselves having a hard time eating enough food to grow, but more importantly to not over train need to reevaluate their meal plans. These body types shouldn’t have trouble going into a caloric surplus. A lanky or even skinny bodybuilder should be having a cheat meal for every clean meal they consume. Eating like a contest prepped ecto year round, while having a metabolism that burns like the fiery pits of hell is a safe bet for no gains and spun out wheels in the gym.

The second part of our overused cliché is one that really makes me scratch my head. What are these guys doing in the gym where they find the need to either go 7 days a week, hit two-a-day sessions, or stay grinding away at set after set for 3 or 4 hours each workout? If you’re really doing a leg or back workout that would put chills down Dorian’s back then there’s no conceivable way that you would be able to turn around and do a similar workout 3 days later.

So does this phrase actually hold water, especially for the real bodybuilder who trains his ass off and is savvy enough to know how to sneak extra calories in his diet without getting too pudgy in the off season? Is it really possible to eat enough food to the point you can never over train? John Meadows is notorious for using a strategy outlined where, with his food strategies, he’ll have his clients training body parts 2 and sometimes 3 times per week without them experiencing any mental and physical fatigue.

It all sounds good in theory, but in practice is this even possible? Obviously, guys are doing it, but in order to train every day, all day, who has the time, the budget, or the desire to do it consistently enough to actually see the dividends from such a daunting task. In essence, I do believe there’s no such thing as over training, only under eating, but where’s the real life proof to back it up? Are we to assume Big Ramy’s massive growth was due to him eating 10,000 calories a day, while training 14 sessions per week – every week; and not the drugs and genetics? And if he was to actually undertake such a mission and what we already know about Ramy, is it fair to say he could grow into 330 or even 350 pounds?

And this is where science has it flaws. On paper, this theory is probable, but where are the human crash test dummies to actually put it to work? Why aren’t more IFBB pro’s eating more so they can train more and grow more? There are only a handful of bodybuilders who I can actually look at their physiques and say, “Yup, this guy ate his ass off from the previous year.” Kai Greene is the one that comes to mind. He’s as thick, gnarly, and wide as any bodybuilder in history just months after his last few Olympia appearances. But then there are guys that simply don’t make progress season after season. What gives? Is it their training, their eating, their drugs?

As always, I prescribe a script for common sense. Eat until you sweat, but watch that body fat percentage. Train until it hurts, but don’t get hurt. And listen to what your brain is telling you. Remember, your body is stronger than your mind. It can always take more, but you have to push yourself to find the pain.