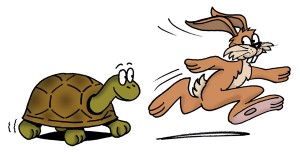 One would be hard pressed to find a more fitting analogy than comparing the story of the Tortoise and the Hare with bodybuilders of varying genetic gifts. The Tortoise and the Hare tells the story of a slow tortoise who manages to defeat a much faster hare in a foot race. The hare is clearly more gifted at running by nature than the tortoise, but this also causes the hare to be over-confident and irresponsible. The tortoise on the other hand, worked as hard as he could for the entire race, took no breaks, and ended up beating the hare, who had taken a nap mid race in a display of arrogance and over-confidence. The extent to which the moral of this children’s story relates to bodybuilding is rather uncanny.

I often times advise young people who are just getting into working out to not ever get discouraged by people who are muscular and lean by nature with little to no work. I tell them that although these individuals might be genetically superior, it is often the case that they coast by on these genetics, causing them to stagnate or regress as the years go by. If you are to do your best and be consistent with your diet and training year after year, it is very likely that 5-10 years down the road these genetic freaks will be the ones looking at you with jealous eyes. Bodybuilders with sub-par genetics will generally build a strong work ethic and substantial will power early on, both of which will usually stick with them the rest of their lives. The polar opposite can be said for the genetically elite. These individuals tend to form bad habits early on such as eating junk food, missing meals, and skipping workouts. Who can blame them? If you could be big and shredded while eating chocolate and working out a few days a week, would you not? The problem is, this strategy will only be successful for a limited period of time. At some point, even genetic mutants have to train a bit harder and diet a little more strictly in order to continue to see results. If not, they may very well may catch a glimpse of a big slow tortoise in their rear view.

There are several examples of top bodybuilders who took the slow and steady approach and formed very impressive careers because of it. Names like Dexter Jackson, Tony Freeman, and Troy Alves immediately come to mind. These are competitors who did their own thing, grew slowly, and never fell into the trap of attempting to get too big too fast. Dexter Jackson was ridiculed throughout his entire career for “never changing”. It is now obvious that The Blade knew exactly what he was doing, seeing as he has won the Mr. Olympia title once, the Arnold Classic four times, and continues to be a threat for any show despite being in his mid 40’s. The vast majority of the men who “outsized” him in the past are long since retired and have far fewer wins to their credit than Dexter. Toney is another guy who made sure to take care of himself and put his health first while coming up the ranks in bodybuilding. Toney is still on the circuit taking names, even as he approaches being half a century old. Not only that, but Toney could pass for a guy who is in his late 20’s with his high skin quality and tight waistline. Take a good look at most other 50 year old bodybuilders or retired bodybuilders and see if this is a common trend. Maybe Toney deciding against weighing 350 pounds in the off season was a wise strategy after all.

Taking the slow and steady approach, not attempting to accomplish your goals too fast, is not the only message in The Tortoise and The Hare. Working hard, doing your best, and not slacking off are also key moral lessons displayed in this children’s story. Bodybuilding does a fine job proving the importance of this message. There have been many bodybuilders who have outworked genetically superior athletes in order to defeat them. Jay Cutler managed to topple men such as Victor Martinez and Kai Greene who are more gifted for bodybuilding, through unadulterated hard work and determination. Branch Warren has also defeated men who are in an entirely different genetic tax bracket than himself by training harder than anyone else and suffering his way into insane condition. In 2009, Branch was even successful at defeating the ultimate “Hare” himself, The Gift, Phil Heath. The Godfather of this do-your-best notion is of course, Dorian Yates. No bodybuilder was as engrossed in the bodybuilding lifestyle as The Shadow. Dorian out worked his genetically superior opponents, no two ways about it. Nature never intended on men like Flex Wheeler and Kevin Levrone being defeated by Dorian, but Dorian defied mother nature through his incredible work ethic and dedication.

Although having stellar genetics is certainly a huge advantage in bodybuilding or any other physical endeavor for that matter, it can also manifest itself as a curse if one is not careful. A genetic freak, just like the Hare, has the choice to coast by on these genetics, choosing to be lazy and relying on genetics alone, or supplement these genetics with a proper amount of hard work and determination. The latter will result in the manifestation of individuals like Arnold Schwarzenegger, Ronnie Coleman, and Phil Heath. That said, the genetically less fortunate can rest assured that the vast majority of the genetic elite will be similar to the Hare in the story, be lazy, and not do everything 100%. This gives the “normal” people a substantial chance at becoming better than or besting these genetic mutants. The Tortoise and the Hare teaches us to not get discouraged by individuals with fantastic gifts, be very consistent, work harder than the next guy, and someday your big, slow Tortoise ass might be waiting for a Hare at the finish line.