The Science Behind Intra-Workout Nutrition 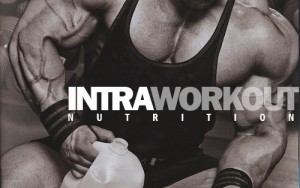 The concept of a training window, during which recovery and growth could be enhanced through the timed consumption of particular nutrients, is nothing new, having first been mentioned in bodybuilding publications over 50 years ago. Since that time, our understanding of the science of muscle growth has increased exponentially, revealing to us newer and more effective ways of utilizing workout-based nutrition to enhance our progress.

In this article I am not going to debate which method is the most effective, but rather, discuss how we can use certain foods, drugs, and supplements to take advantage of this brief window of opportunity. The purpose of any training-based nutrition program is to accelerate recovery and growth, which is accomplished primarily by enhancing glycogen deposition within muscle tissue and increasing the rate of protein synthesis.

forefront of our priority list. Protein, from which aminos acids are derived, are the basic building blocks of muscle tissue and are therefore essential to protein synthesis, while carbohydrates are converted into glucose and subsequently stored as muscle glycogen. Knowing this, the question then becomes “how can we use protein and carbohydrates to optimize both the rate and extent to which these processes take place?”

With the training window remaining open for just a few hours, factors such as protein/carbohydrate type, quantity, and speed of digestion, as well as the timing of these nutrients, all have a profound impact on the body’s ability to take advantage of this heightened muscle-building state. When it comes to protein, the type of protein consumed becomes an important factor. Not only must the protein be complete (i.e. contains all essential amino acids), but it must digest rapidly. Otherwise, the muscles will not be supplied with the correct ratio or amount of aminos acids necessary to maximize protein synthesis.

To this end, protein powders work best, particularly those which have been hydrolyzed, or pre-digested. Basically, a hydrolyzed protein has been broken down into smaller particles known as di and tri-peptides, which dramatically increase the ease and rapidity with which the accompanying amino acids are digested. In many cases the amino acids from these proteins will enter the bloodstream in one hour or less. By comparison, red meat and casein protein can take up to 7 hours to fully digest, and in some cases even longer. Any type of protein can be hydrolyzed, equalizing the digestion rate regardless of source, assuming the protein has been hydrolyzed to the same extent. The best of these are whey, casein, beef and egg protein hydrolysate, as they provide a more balanced amino acid profile than most other proteins.

In the absence of hydrolysis, protein selection should be determined by natural digestion rate. Protein powders are still ideal, but type becomes much more important at this point. Whey isolate would be the next best choice, followed by whey concentrates. Beyond that, digestion rate slows tremendously, making protein source much less relevant and canceling out many of the potential benefits found with a properly structured intra-workout program.

There is one more option, which under certain circumstances may be preferable to hydrolyzed proteins. EAA’s (essential amino acids) in free form have similar advantages to hydrolyzed proteins, in that they are rapidly absorbed and possess a complete amino acid profile, but they have the added benefit of taking up less room in the stomach. This final benefit is a significant advantage for those who don’t feel well when consuming a large volume of liquid during workouts due to nausea or cramping, as well as those who are trying to reduce caloric intake for fat loss purposes, but who still want to receive the same muscle building benefits of protein powders.

When it comes to carbohydrates we are left with numerous options, many of which are now considered out-dated. In my personal opinion, branched cyclic dextrins are ideal for intra-workout nutritional, due to their impressive list of benefits. HBCD’s possess extremely high osmality in solution, which greatly increases the rate of gastric emptying (i.e. clearance from the stomach). This reduces bloating and cramping during training, while also leading to a near immediate, yet sustained absorption. These super-carbs are lead to improved glycogen restoration, and are even less likely to impair fat loss.

In addition to these basic macronutrients, there is one other amino acid which deserves a special mention, specifically because of its ability to directly stimulate protein synthesis. I am referring to the essential amino acid leucine, which, while being a basic building block in the construction of muscle tissue as one of the EAA’s, also has a dual role as the primary regulator of protein synthesis via the M-tor pathway. While all the EAA’s are required to build new muscle tissue, only leucine has the power to turn on, as well as control the rate of protein synthesis. In other words, leucine tells the body to begin mobilizing currently circulating amino acids for the construction of new muscle tissue, while the quantity of leucine consumed will determine how strong that signal is. The stronger the signal, the more muscle growth one will experience.

Allow me to use the following analogy. You could look at the job of protein synthesis in the same way as building a skyscraper at a construction site, with the construction workers being the essential amino acids and leucine being the foreman. By increasing the number of workers on staff, the potential level of productivity goes up (more muscle can potentially be built), but without a foreman telling the workers where the construction site is and providing the orders to begin work, nothing will get done. Leucine functions in the same way as the foreman, signaling the body to begin using the EAA’s to synthesize new muscle tissue.

For this reason, we must be sure to consume optimal amounts of leucine during the training window if we desire to maximize protein synthesis. Recent studies have shown that 4.5 grams of leucine, consumed all at once in their free-form, produced a maximal spike in protein synthesis, with greater amounts having no additional effect. Now, keep in mind that a protein such as hydrolyzed whey, casein, or beef contains a large amount of easily and quickly liberated leucine (one must ingest roughly 40-45 grams in order to get 4.5 grams of leucine), which means it is not necessary to supplement with a full 4.5 grams of leucine when one has already consumed adequate amounts of these proteins.

However, the 4.5 grams of leucine referenced in the above–mentioned study was delivered into the body in near bolus style, while a protein like hydrolyzed whey will take a bit longer to fully release its available leucine into the bloodstream. While the difference is not extremely significant, the addition of a few grams of leucine is likely a wise practice, as it will ensure optimal concentrations of leucine within the bloodstream right off the bat. When consuming non-hydrolyzed proteins, such as non-hydrolyzed whey or whole foods, supplementation with leucine becomes even more important. In terms of EAA’s, since the manufacturer determines how much leucine is contained per serving, you will need to view the nutrition label in order to know how many gram of leucine, if any, should be added.

When deciding what other products should be included in your intra-workout nutrition plan, it becomes more a matter of finances than anything else. There are numerous beneficial supplements on the marketplace which can increase the rate of muscle growth through various mechanisms. Creatine is the most well known example, with clinical studies showing it to be capable of stimulating protein synthesis through both direct and indirect mechanisms. With high quality forms of creatine available at such a low cost, I find its inclusion to be basic fare for just about everyone.
I am not going to name dozens of different products and their respective benefits. Rather, I will conclude this topic with the following thought. During the training window, just about anything you consume which has recovery and/or muscle building benefits, and which is used within the muscle cell—those benefits will be increased due to the body’s up-regulation of its recovery & growth processes. Therefore, allow your finances to determine what you do or do not include in your program. Some notable products include anything which increases blood flow to the muscles, volumizes the muscles, or which increases protein synthesis.

Now, we could consume the very best proteins, aminos, carbs, and other products, but if these macronutrients and supplements aren’t being delivered into the muscle cell in optimal quantities, then muscle growth cannot be maximized. This is a basic fact that cannot be ignored if we want to make the most of our training sessions. There are two ways to go about this, one of which is considerably more effective than the other. We can either use insulin, or we can use supplements designed to increase insulin sensitivity, so that the body responds more effectively to its own insulin production. The ideal scenario would be to do both, as this will allow us to receive maximum benefit from both forms of insulin—endogenous and exogenous.

Let’s take a minute to address the issue of timing before I finish up here. It used to be in years past that the post-workout window was considered to be the single most important time of the day to eat ample amounts of protein, carbs, etc. It wasn’t until studies began showing even greater increases in protein synthesis with the pre-workout consumption of amino acids that BB’rs began to change their views. However, pre-workout nutrition is more accurately defined as intra-workout nutrition, as any nutrients we consume immediately before the workout will be delivered to muscle tissue during the workout itself. At the same time, intra-workout nutrition is more accurately defined as post-workout nutrition for the same reason.

Knowing this, it is not surprising that the consumption of aminos pre-workout provided superior results to post-workout supplementation, as the consumption of nutrients post-workout would have delayed their delivery into muscle tissue until sometime after the workout had been completed, preventing the muscles from receiving much needed amino acids during both the training session and immediately afterward.

With such strong evidence backing up this approach to workout-based nutrition, if you are not currently utilizing some form of pre-intra workout supplementation, then you are short-changing yourself of the benefits you could be receiving. Reduced muscle soreness, improved glycogen restoration, enhanced protein synthesis, faster recovery, greater fullness and muscle pumps, and improved endurance recovery are all possible. The good news is that it doesn’t cost much to use a basic mix of hydrolyzed protein/EAA’s, branched cyclic dextrins, and leucine, but if these supplements are outside of your price range, than a basic whey isolate and waxy maize concoction will still provide most of benefits listed above, although to a reduced degree.