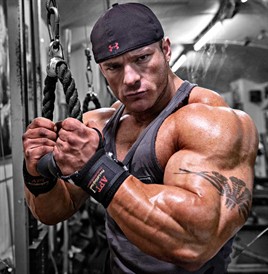 Flex Lewis’ current situation is very unique to the bodybuilding industry. This same situation however, is fairly common in many other facets of life. As far as I know, this particular situation does not have a name, so for the sake of argument I will call the situation “The Flex Lewis Situation”. What makes Flex’s situation so unique is that he has two very different options in regards to how he will continue his bodybuilding career. One of the choices gives Flex a brand new challenge and a chance to significantly better himself through increased hard work and dedication. The other choice gives the Flex the opportunity to “coast” if you will, not push the drugs or the training while remaining number one in the world in his class and holding onto his lucrative contracts without having to kill himself in the gym or in any other way.

This critical situation can be seen in most any career, when a person has the opportunity to be promoted to a more prestigious position or take a new job that does not pay any more money, takes a bit more work, but would test them and put their abilities to better use. Many people have a “brainless” job where they just go through the motions, get paid well, and feel very comfortable, only to have an opportunity arise for a new position that would make them feel more fulfilled but was risky and took more effort. Obviously, Flex Lewis’ situation is not exactly like these examples, being the 212 champ is certainly not a “brainless” task, but there are some strong similarities.

Assuming Flex remains in the 212 class, he may be able to win the title more times than any other “Olympia” champ in our sports history. As mentioned earlier, Flex could accomplish this astronomical feat without having to push the limits of his supplementation or training, which is obviously a very tempting offer. It is not often that a bodybuilder can train and supplement at 80% and be the best in the world at what he does. The only examples that comes to mind might be Lee Haney for a year or two, or possibly Kevin English the first one or two times he won the 202 showdown. Even the great Ronnie Coleman had to keep on his game 100% to keep a hungry Jay Cutler at bay. Although this seems like the ideal situation for any athlete, in Flex Lewis’ case, choosing the “easier” path means never maxing out his potential to become the best bodybuilder he can possibly be, which is the main reason we all bodybuild. The future of Flex Lewis if he chooses to jump into the open division is much harder to predict.

Depending on who you ask, Flex would place somewhere between 12th and 4th in the open Mr. Olympia contest. Making an educated guess on where he would place in the open is fun and all, but without seeing Flex next to the big boys with whatever improvements he could make without having to suck down to 212 pounds, it is really just that, a guess. Dexter Jackson won the olympia in 2008 at roughly 5’6” and “238 pounds” (maybe he was standing on Jupiter?) and has placed top five several times at this same size. Flex is only one inch shorter than Dexter, and if he is weighing 212-214 onstage now “holding back”, he could certainly compete over 220 in the open class. Back here on earth, I find it hard to believe that Dexter weighs more than 225 onstage. So based on size alone, which is the main factor in determining whether or not Flex goes into the open, Flex could theoretically place extremely high at the Olympia for several years.

Placing high is one thing, but having the opportunity to max out your physique and see what you are truly capable of is an entirely different animal. Most bodybuilders compete for personal improvement, not to acquire trophies. If Flex is one of these people, this makes his decision even harder because there is no possible way he can max himself out in the 212 division. Personally, I would rather “coast” and remain in my “comfortable” spot, then do something more rewarding but have to work harder and push things. That said, I also feel that placing top 5 in the open at the Olympia several times is more impressive and a better accomplishment than placing first in the 212 Olympia several times. Although there is a lot of talk about Flex entering into the open, most experts agree that they do not think he will do it. We will not know the answer for sure until we hear from the man himself in 2015.