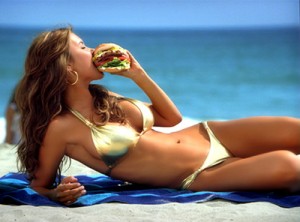 We are now in a time where convenience rules and patience has become something of the past. With today’s technology many things are done with the push of a button. Tasks that used to take physical effort to accomplish can now be done with a computer or tablet. With people consuming more calories than ever, and less calories used throughout the day, our society has become fatter than ever.

Two-thirds of our population is either overweight or obese. That means if you are in shape or at a weight that is considered healthy, you are a minority. With today’s children relying mostly on social media and electronics for exercise, while consuming calorie packed foods, the obesity problem in America will continue to grow.

The fast food industry has cashed in on the American need for convenience. While generating annual revenues of over $110 billion, the fast food industry banks on the healthy population remaining a minority. The fast food industry is not the only industry that has cashed in on sedentary and overweight Americans. The weight loss industry estimates revenues at $61 billion annually, with much of that income relying on fad diets, and fat loss supplements that promise to drop large amounts of weight in a short period time with no change in diet. This is very appealing to sedentary people that don’t want to exercise or change the way they eat. There is still a large part of the supplement industry that doesn’t prey on uneducated consumers to make a profit, but that is not who I am focused on here.

You can go to Amazon or any bookstore and see a list of books that claim to contain the newest and most innovative diet plan. Very rarely will there be a book in this group that is actually reasonable or realistic. Often times, the diet plans these books contain will push the reader to drastically change the way they eat for a short period of time to lose large amounts of weight. These fad diets offer a temporary fix and no long-term solution to obesity.

Fad diets are nothing new. In fact, William the Conqueror devised an alcohol only diet plan in 1087 after being too fat to ride his horse. This diet plan was not successful for William. Later that year he fell off his horse and died, leaving his servants struggling to find a coffin large enough to fit the overweight king. Fad diets gained mass appeal in the 19th century through Sylvester Graham, who was the man behind the Graham Cracker. This Presbyterian minister promoted a diet that mirrored the puritanical beliefs of his time. The Graham Diet, developed in 1829, sought to temper feelings of lust and desire while maintaining a strong sense of health. Sylvester Graham recommended a complete regimen of hard mattresses, cold showers, and a diet consisting of homemade bread, rough cereals, fruits, and vegetables, while avoiding meat, caffeine, and breads that were not homemade. Graham was once attacked by a mob of butchers and bakers for his role in promoting the avoidance of meat and store bought bread.

Fad diets have changed dramatically since the times of William the Conqueror and Sylvester Graham, but the diet plans promoted today are just as ridiculous. Most of the fad diets promoted today consist of extreme calorie cutting by restricting certain food groups or by relying on pure liquids as a source of nutrition. The diets that are going to be covered will often result in a good amount of weight being lost, but the downside is that the majority of weight lost will be muscle mass and water. So the dieter will end up looking like a smaller version of what they were before, body composition is not improved and their ability to burn calories efficiently is decreased with muscle mass being lost.

The HCG diet became the big craze several years ago. This diet consists of taking HCG in an injectable form when given by a doctor and consuming just 500 calories per day. The theory behind this diet is that calories are dropped to an extremely low level, and taking HCG would keep the body in a fat burning mode while sparing muscle tissue. When dropping calories as low as what is recommended with the HCG diet, the body will turn to muscle tissue for fuel. Even though HCG can only be assimilated by injection, many companies marketed a homeopathic form of HCG in drops, pellets, and sprays. Many people that have tried the HCG diet have lost weight, regardless if the HCG was taken in an oral form or by injection. The fact is that anyone who drops calories to 500 per day they will lose weight, but even with taking real HCG by injection, most of the weight loss will come from muscle mass. The weight lost with this diet results in a lower metabolism and a less than desired body composition. After running the HCG diet with just 500 calories per day, it’s common for the dieter to go back to poor eating and they will end up fatter than they ever have been.

There are many low carbohydrate diets that have been marketed over the years. The Atkins diet has been the most popular. The company that marketed the Atkin’s diet marketed everything from protein shakes to low carb pancakes and syrup. This diet has several phases, and the first phase consists of cutting all carbohydrates out while taking in large amounts of protein and fats. There is a maintenance phase that follows the first phase and this will allow the dieter to slowly add in small amounts of carbohydrates. People that use the Atkin’s diet are told that this way of eating is a lifestyle change and needs to be done for the rest of their life. While the concept of putting the body into ketosis to burn body fat over the short term can be good, over the long term it causes muscle wasting. I have seen many people lose weight from this diet, but I have never actually seen a truly lean person with an attractive physique when running this diet long term. During the first phase, when carbohydrates are completely cut out, there will be a considerable amount of weight lost. With the first phase, all carbohydrate consumption is stopped and the body is depleted of carb stores after about 72 hours. For every gram of carbohydrates stored within the body three grams of water is stored along with it. So, when carbohydrates are depleted, water is dumped from all tissue throughout the body, including muscle tissue. This really hinders strength and endurance and makes it very difficult to train in any fashion at an optimal level. Again, even though large amounts of weight can be lost with a low carb diet, over the long-term it will result in muscle wasting. Just like with the HCG diet, and when muscle is lost, metabolism drops.

I just covered two very popular fad diets. There are hundreds if not thousands more that could be discussed. They all have the same concept and same end result. They cut out a major portion of a normal diet or extremely cut calories. It all ends the same way, the weight that is lost is primarily muscle, and more body fat will be added at after the diet is stopped.

Obesity has become an epidemic in America. It is now estimated that almost 20 percent of our population will die of problems related to obesity. As I have said many times, a 7-day detox or 3-day diet will never compensate for poor eating and lack of activity. As I see it, fad diets are a problem that contributes to obesity in our country. As long as people want a quick fix and don’t want to live a balanced lifestyle, there will always be people getting rich by promoting the newest weight loss method.