Newer PostMilk, the white ladykiller
Older PostAnother Round With Alcohol & Muscle, V 2.0
Share on FacebookShare on TwitterShare on LinkedinShare on Pinterest 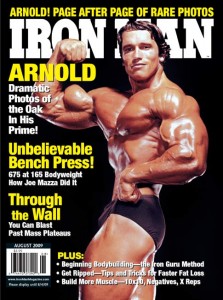 One of the great joys of my first years following the world of bodybuilding was walking into the local grocery or convenience store and finding a new issue of any top muscle rag. Flex and Muscular Development were my main go-to but I would often pick up a Musclemag or any other thickly paged magazine that caught my eye (we will ignore the fact I started with Muscle and Fitness…I didn’t know better, okay?).

Conversely, few things were more frustrating then going to the local 7-11 expecting to see a shiny new cover shot staring back at you like a mysterious new journey only to find the same boring photo you had been staring at for the last 30 days. It’s strange (and somehow kind of sad) that a lot of our current generation of up and comers never experienced the magazine era…admittedly I was on the tail end of it but it was a very special time for me and having to hunt down this information in print somehow added to the intrigue and mystical nature of bodybuilding. Once I graduated to subscribing to my magazines of choice, I similarly recall checking the mail daily around the beginning of the month visualizing the mailbox stuff with 400 page issues only to be either thrilled to find them or bummed out to have to go back and re-read last months edition for the 15th time.

Many things have changed since these days for most of us and although there are countless factors and events that have gotten us to today, the no bullshit truth is that print is on life support. To condense it to a few key moments, it basically started when Dave Palumbo took over Muscular Development’s online presence and we now had training videos and lifestyle specials that gave us groundbreaking insight into daily bodybuilder life – a very stark contrast to the calculated fairy tales that were strategically laid out in the magazines. People became more and more tired of having to wait a month or two for contest pictures and results and the instant gratification that online coverage gave slowly took over.

This became even more true when Palumbo and partner in crime John Romano were fired from MD and in short time started up their own entity, RX Muscle – With the discrepancy being that RX Muscle did not have a major print publication attached to it. While this allowed them to focus solely on in the trenches contest coverage and giving the instant feedback to fans, it also meant they didn’t have a large backing bank account or a staple of contracted athletes at their disposal.

Fast forward to modern day and no longer is internet coverage a novelty, but it’s the one and only resource for anyone who passionately follows the sport. While the players involved are changing, the goal remains the same; Bring creative and interesting content that keeps fans interested while avoiding the biased and archaic politically correct coverage of bodybuilding that sadly we had become content with.

Recent issues of Muscular Development have hit record lows in page count, in fact it’s down to about 1/3 of the bulk it used to carry. Flex magazine has announced it will no longer be releasing monthly and is cutting down to 10 issues annually. The safe bet is that announcements like this will become more frequent, alongside dissolving of the exclusive contracts to these magazines (Muscular Development recently cut Jose Raymond and Jon DelaRosa who had both had amazing years in the IFBB). It’s doubtful we’ll ever see big dollars in bodybuilding media again, as the download generation has much higher standards for content but is less willing to pay for it.

As the magazines slowly fade off the shelves, more modern content such as radio shows and podcasts become increasingly popular. While I am fully on board with this changing of guard, one cannot help but feel nostalgic when reminiscing about the aura around bodybuilding mags in the years that were special to them.