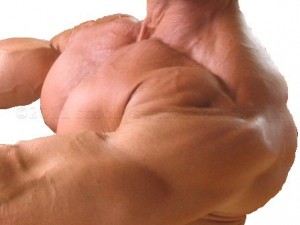 My chest kinda sucks. If I kept doing what I did for my first few years training, it would have continued to REALLY suck instead of just kinda sucking like it does now. As I picked up on different ways to engage my lats during back exercises and tweaked my form my back began to suck less to the point where it no longer sucks. Ditto for my delts. Some parts that sucked became strong points to the point where I could easily “phone in” a few workouts or even skip them entirely and they would either stay exactly the same or deflate a bit only to spring back to peak form after a few sets.

But not my chest. It has never been a body part that I could get away with slacking or even sub-optimal training. Now, what optimal means for every person is different as it is usually unique differences that are holding each person back but there are a few things that people with weak chests usually have in common. The problem is they see people with genetically gifted chests do these things so they mimic them assuming it will work for them but not only might they be not the best methods to use they could even be holding you back.

Remember when you started training everyone told you decline presses worked lower chest, flat presses worked the middle and entire chest and incline was the key to an upper chest? Many people are front delt dominant (usually from rolling shoulders forward during pressing movements) and have lacking chests to begin with. Regardless if they are the MOST common or not, these are the people we are talking about here. Now, when your front delts roll forward making your upper chest appear even more non-existent then it is, the standard recourse for people is to freak out that their chest is “droopy” and ditch almost all their decline and flat work and hammer incline movements till the cows come home. First of all, too many people do their incline work on far too high of an angle (30 degree maximum, 15-20 is safest for joints and most productive for pecs in my opinion) which in turn just hammers their front delt even more, while their poor upper pecs only get minor stimulation by coincidence. The main problem here is that realistically it’s the fact that the persons’ chest development is lacking OVERALL due to a lack of proper stimulation and by default their pecs appear bottom heavy as that is where the majority of the meat sits in that muscle group. So really they just have a weak chest, and now they have ditched the majority of exercises that can truly slap on some beef onto the breasts due to fear of having “bottom heavy” pecs and are now focused on poorly executed incline movements that are just creating further imbalance.

One lesson I learned that helped me on my path to less-shitty pecs is that if you develop the mind muscle connection and perform exercises in the way you can get the best contraction/stretch, even “lower chest” exercises can help build your upper chest. Dips, decline presses/flyes, flat bench/flyes can all fill your pecs with tons of blood and with the right tension will develop your ENTIRE pec. I am not denying that incline movements have their place, but many of the greatests chests of all times were built on the basic movements and the people possessing them didn’t worry too much about angles.

*Form Tip* – A successful rep for chest stimulation is reliant on your shoulder placing. Your shoulder blades should be rolled backward and together so they are touching the bench (or hanging off the sides if you are wide enough). When doing the positive portion of the rep your hands should be focused on squeezing together – Not so much literally but even if you are grasping a barbell tightly you should be focusing the tension on squeezing the pecs and bringing your hands together. If you are sitting in a chair you can experiment with what I am talking about. First, arch your back a bit and just push your arms forward like you are doing a bench press without much thought, just extending your arms. Now, really bring your shoulders back so your chest is fully stretched and then push your arms together (again this is figuratively as they don’t need to physically come to closer to each other) and squeeze through the pecs. You can even place your chin down (not recommended with actual heavy weight) to FEEL your upper chest contract. And always keep your shoulder blades retracted in their starting position throughout entire movement. This applies to presses and flyes! Focus!

I suggest if you suffer from a lack of pec development you avoid falling into the traps that everyone else seems to sink into. Do you know people who regularly hit heavy flat bench for high reps and pound out weighted dips but have a crappy chest? I can’t think of many…however I see tons of guys on the 45 degree incline bench every week who never seem to fill out the front of their shirt. The old school exercises aren’t the problem, if they were the 70’s wouldn’t have been full of Hall of Fame pecs. Instead of abandoning the bread and butter, maybe just learn a better way to butter the bread!

Newer Post
Did You Get Bit By the Wrong Fitness Bug?
Older Post
Insulin – Common Misconceptions and Frequently asked Questions