Shawn Rhoden – Does he have time? 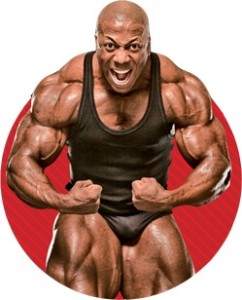 The 2014 Mr.Olympia was one of few highlights (from a physique standpoint at least), in fact several bodybuilders who have become known for their consistency showed up on the Vegas stage not looking anything like their personal best. Between the ongoing soap opera of Phil Vs. Kai (yawn), the rumors of Dexter Jackson being dramatically larger than he has ever been (he was bigger but nothing shocking), and many people crossing fingers that Big Ramy would finally show up in the condition needed to grab the placing he has the potential to, not many people were talking about Shawn Rhoden.

Shawn broke out onto the scene in 2012 with a victory at the Tampa Pro and carried that momentum straight into the Olympia that year grabbing a top 3 placing. While he had been touted as a possible threat earlier than that, he lacked the muscle mass to truly stand toe to toe with the top guys. After getting his issue with an umbilical hernia sorted and teaming up with All Star guru Chris Aceto, he progressed rapidly and was the talk of the town in 2012.

Blessed with a truly fantastic structure, to a lot of bodybuilding fans Rhoden represents an ideal that many feel has been lost in the last few generations of top level competition. His name has been synonymous with the great Flex Wheeler since he was just breaking onto the scene in 2009/2010, which is a high order. While personally I feel this comparison is off base as Rhoden lacks the extremely round muscle bellies that cemented Wheeler as one of the greatest of all time to many, his structure and small waist definitely have more in common with the 90’s competitor than many of the thicker, blockier physiques we have seen since.

One question that has to be asked is, will his age affect his potential progress over the next few years? Rhoden may have won his pro card in 2010, but few pay mind to the fact he is one of the elder competitors on the Olympia stage (save for the notoriously well-aged Dexter Jackson and Toney Freeman). As he passes from his late 30’s into his early 40’s next spring, his body shows zero signs of being in his 5th decade of life and his muscles apparently have not gotten the memo. This begs the question if age (within reason) truly is the limiting factor for a bodybuilder or if simply time competing at a high level for extended periods of time is the dictator of physique degradation. At some point, every aging competitor will show signs of battle wounds (torn muscles, looser skin, just generally not a youthful appearance to the muscles and skin) that we naturally associate with the number of years they have been alive, while it would probably be much more accurate if we used years of heavy training/supplementing/competing as a guide. Branch Warren showed up at this years Olympia looking the best he has in years and I must give him credit for that, but for the sake of an example, he has long been associated with looking “worn out”, “beat up” and basically a physique that is past it’s prime; Few people realize that Branch is mere months older than Rhoden who conversely is talked about as just now being on the cusp of reaching his potential.

Shawn Rhoden took many years off from serious training as he battled alcohol issues following the passing of his father in the early 2000’s. One would assume that alcohol abuse would not preserve one’s physical appearance, but either the break from bodybuilding postponed his “muscle age” or he is truly a genetic phenom ala the great Robby Robinson (who competed from his late 20’s into his early 50’s). The bodybuilding clock says that Rhoden’s improvements should be limited in the coming years but his performances prove otherwise. This Olympia he thrust himself back into the discussion by bringing a few solid extra lbs of size to his already widely acclaimed frame. His conditioning has been solid since teaming up with Aceto, and he possesses a “polish” that can really only be witnessed in person and does not translate to pictures or internet streams.

Being taller than Phil Heath and Kai Greene works in Rhoden’s favor as he compares very favorably with them in callouts – Except in some of the back shots. His back has been his weak link for the majority of his pro career and continues to be as he is now back in discussion as a major player (although it has improved). If Shawn Rhoden can continue adding quality lbs in the places that need them on his flawless frame, he might be a contender for that top spot and at the very least a top callout guy for many years to come. Will time stop him? Or is he destined to defy his age and truly hit his stride in his 40’s? So far it’s safe to say it is wise to believe in him.