Protein Spiking: What it is and What YOU can do about it 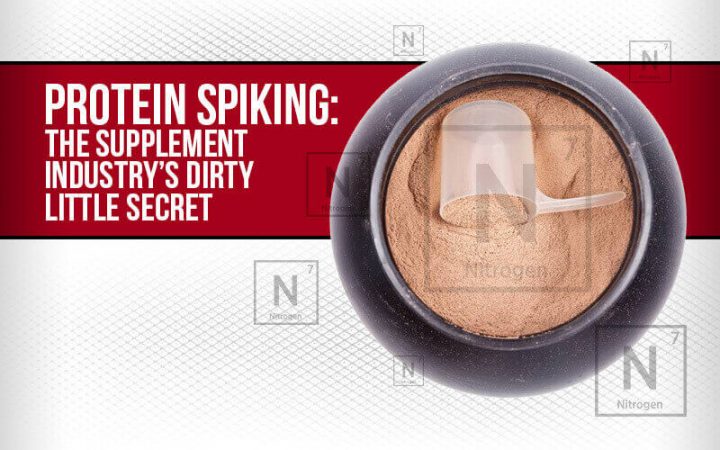 If you’ve bought protein powder in the past few years, you’ve probably been ripped off. So that’s the bad news…but the good news is that you might be eligible to get some of that money back.

If you’re unfamiliar with the term, protein spiking (aka amino spiking or nitrogen spiking) is what we (people who work in the supplement industry) call it when a company adds cheap aminos to a protein powder to drive down the manufacturing costs.

The result is an inferior product (for the consumer) and a greater profit margin (for the company). Let’s make this more concrete: when you bought that jug of whey protein that said you were getting 20 grams of protein per serving, it wasn’t actually 20 grams of whey protein. It was 18 grams of whey, plus whatever cheap amino was added (which doesn’t have the same benefits of whey for building muscle, burning fat, etc…). You were ripped off, in this example, for ten cents of every dollar you paid. While some companies chose not to spike their products, others do it quite heavily, and you might be losing twenty to twenty five cents on the dollar, with each purchase.

Ok, so that sucks, right? You’re losing money, and even worse, when you believe you’re ingesting a bolus dose of whey protein at 20 grams (optimal to enhance muscle protein synthesis), you’re actually getting less than you need. And some companies aren’t just replacing 1-2 grams per serving, they’re hitting you for 4-5 grams. Even worse is that depending on the amino being used to spike, and how much nitrogen it contains, you could be getting far less protein than you think.

This has been happening for years because of (what I’ll call) a loophole in the laws surrounding the labeling of protein supplements. Protein is calculated by the amount of nitrogen in the product, and as long as you’re not selling an amino-only product, many companies have opted to remove a substantial portion of their whey protein, and replace it with cheap aminos. If you’re a regular buyer of big-name protein powder, it’s unlikely that you haven’t had spiked protein.

This is entirely, 100%, the fault of the companies who are engaging in this deceptive practice. Yes, whey protein is expensive, and margins are razor thin, and blah blah blah…nobody held a gun to anyone’s head and told them that they had to produce a spiked product. This isn’t the fault of the laws, it’s the fault of the people who know that they can use the laws to their own advantage to produce an inferior product and put more money in their own pockets. I’m certain that the FDA didn’t draft these guidelines with the intent that they be used to deceive consumers.

Certain trade organizations have rallied to stop protein spiking, but they only did so after bloggers and vloggers put the issue on front street, and made it one that couldn’t be ignored any longer. I’m not a fan of this approach, because A. they knew about it for years and did nothing (too little too late) B. compliance would be voluntary.

Many have written on this topic before (myself included), but not much since the class action has been announced. Right now the protein powder companies are highly uncomfortable, because it’s become common knowledge that this class action is being gathered. Bodybuilding.com has even taken the unfortunate step of deleting a thread that announced the class action itself – making it seem obvious that they either have something to hide or something to protect. Also, with the recent POM Wonderful ruling (a Supreme Court decision), the door has been opened for companies who haven’t spiked to sue the ones who have. That’s also causing some sleepless nights among the C-suite of the major companies.

Here’s the good part: A class action is something that you can participate in, by getting in touch with the firm in charge, and talking to them. You don’t pay for this and you’re not going to pay to be a member of the class action. The firm is paid if and when the lawsuit is won or settled, and they’re paid our of the judgment or settlement. People get cynical about this point, but it’s important to remember that everything about these settlements are public record, so nothing happens without being exposed to the light of scrutiny. Look at this from a different perspective: ould it be better if all of those faulty brakes and ignitions stayed on the market, or that the companies responsible are forced to compensate the people driving their cars. Granted, faulty brakes can kill you, but you get the idea. Getting involved is, of course, a personal decision, and all class actions will be different (I don’t agree with all of them, naturally). But I think this is a good one to get involved with, if you regularly use protein powder. It will send a message to these companies that the consumer should get exactly what they pay for, not whatever will deceit will create the most profit.

People argue that lawsuits like this will raise the cost of protein for the average consumer. I doubt it. See, once the companies engaging in this practice have been stopped, they will still have to compete with the companies who weren’t spiking, and they will still need to bring their protein to the market at a price point that remains competitive. They can’t simply say “new, unspiked formula” or “now we’re not ripping you off” and raise the price. Per that last point, this class action doesn’t just punish the guilty, but it helps the innocent – the companies who have been honest and given you a good product are rewarded by action like this one moving forward, because it levels the playing field for them.