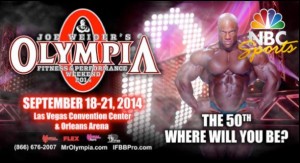 Phil vs. Kai, Kai vs. Phil. Blah blah, we hear the same battles and cliches daily. Kai won’t win because of his past, Phil can only beat himself…at this point everything that can possibly be said about this match up has been said (and said…and said). Let’s explore a few of the other match ups and athletes and talk about what people aren’t talking about.

Shawn Rhoden flipped a switch in 2012 and transformed his physique, resulting in a reign of terror that saw him collect several first place trophies and push into the top 3 at the O. This brought him into legitimate contender position, and he was considered to be a future threat for the title. While Shawn is definitely an amazing bodybuilder and has a level of polish not seen on many of his opponents, I feel the 2012 line up benefited him greatly. While he managed to out-dexter Dexter, a streamlined Kai didn’t carry his usual mass which would have made Rhoden appear slender and Heath was not at his usual crisp 100% condition. This allowed Rhoden to not be out massed or out polished, something that Kai and Phil would have done respectively. This turned out to be the case in 2013 as he dropped out of the top 3, as an all time best Dennis Wolf stole the show. With plenty of new up and coming talent on the horizon, Rhoden is going to be hard pressed to hang in that top 5 for more than another year or two unless he adds some serious size to his weak back.

As for Dennis Wolf, we saw him collect his first Arnold Classic trophy at 90% of his Olympia form. For Wolf fans who thought he had finally nailed his formula, it was quickly shown in Columbus half a year later that he might not have it down to a science. He was a deserving winner of the AC crown but he won’t be moving up in rank in Vegas without getting back to what worked last year. One of the least consistent top IFBB pros, one can’t help feel for Dennis and hope he can finally string together some peak perfomances similar to the one that had many people placing him ahead of Kai Greene and worthy of comparison to Heath.

Roelly Winklaar was arguably the most improved competitor at the 2013 Olympia, and when he walked out you could hear the “wtf’s??” seemingly come out of the screen from the webcast. He looked twice the size and equally conditioned, lacking his trademarked flatness that had plagued him for years. Many people wanted to see him compared to the top spots and I don’t think many would have complained if he placed as high as 4th or 5th. In a sad twist of fate he suffered an injury from a motorcycle accident during his prep for the Arnold Classic that he was poised to contend for with Wolf and was forced to withdrawal. We recently saw him return to stage victorious at the Chicago Pro, but the line up left much to be desired and the Roelly we saw was not the jaw-dropper from the Olympia. If time proves to be all he needed to recover from his auto accident, Roelly could solidify himself as a top callout this year. However if he repeats his Chicago showing I suspect he will remain the 6-10 position unless we see many athletes off their best.

Juan Morel makes his debut this year after a handful of top 3 finishes and finally a victory in Toronto. Juan has grown by leaps and bounds in recent years and is now a permanent contender at any second tier show. As seen by his battle with Big Ramy at the NYP several months ago, he might not yet have added the necassary thickness when it comes to battling the top echelon of the IFBB. A few knock out poses will be sure to save him from embarrassment, but his slender legs and unseasoned presentation could stop him from making waves in his debut. Regardless he deserves to be on stage with the best and could knock a few veterans out of their spots.

Dexter Jackson does not age, and rumors are circulating that he has pushed his body weight to new heights this off season and seen new growth for the first time in years. Never out of shape, at this point Dex’s destiny is as much in the hands of how everyone around him looks as his own. If he has in fact added a few lbs and keeps his condition intact, he could re-establish himself for the umpteenth time and raise serious questions of the possibility that he sleeps in a cryogenic chamber.

One man who has been met with controversy beyond his control is Steve Kuclo. There is no doubt Kuclo is an incredible bodybuilder and has the “it” factor when it comes to marketability, two of his professional wins were met with debate from fans as the judging was brought into question. Anyone who has met Steve can tell you that pictures do not do him justice, thus I reserve judgement on those contests as the contest gallery does not always tell the tale. Kuclo is a taller bodybuilder, and his impossible width means he still had plenty of room for added size. If he nails his conditioning and finds a way for his immensity to translate to the big stage, he could finally shut up a lot of doubters and begin the path to the big leagues that others have already paved for him with hype.

That’s all we will cover this week, check back closer to the show for another round up of the stories we aren’t talking about.