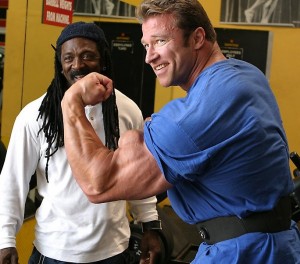 The bodybuilding coach has taken on many forms over the years. Whether you call them a coach, prep coach, trainer, mentor, guru, master, or any other strange nickname one cannot deny that they have become ingrained into the sport as one of the most talked about and interesting aspects of the whole industry. Chris Aceto really took off as the first “guru” when he was doing diets for many competitors out of his office in Gold’s Gym Venice back through the 90’s but even he credits Bob Grushkin as the one who showed him the ropes.

Nowadays we have everyone from current competitors to former competitors, non-competitors and everything in between trying to capitalize on the “guru” craze and make a few bucks telling other people what to eat. Some people even have a desire to coach other physique athletes before they really even start training themselves.

The entire concept of a coach has changed drastically as soon as the internet and bodybuilding really became intertwined. While prep coaches previously had to operate locally, usually as employees of a gym or as successful competitor who had a reputation for getting in shape helping peers – the ability to communicate through emails and text messages along with attached pictures has made every coach accessible to every bodybuilder no matter how geographically far apart they are.

While this has arguably been a godsend for competitors (and even people just looking for an educated helping hand) all over the world and allowed everyone to access the brightest minds in the sport, it has also opened a flood gate that will likely never close again. Fact of the matter is that there is no ranking system or way to gauge if the person who is offering services has any business coaching people (this doesn’t apply to the seasoned NPC and IFBB athletes who have already solidified a reputation and are well known enough to get honest feedback about).

Someone who takes their body and their career seriously is likely to put in enough time researching the coaches and also know their basic methods from following the online crowds and drama, but not everyone is savvy in the world of bodybuilding and can decipher the wannabes from the pack. Being that the fitness “lifestyle” is exploding into “Macarena” levels of trendy mainstream appeal, there are now thousands upon thousands of gullible and innocent people who have adopted (probably for 6 months before they quit) the concept of following meal plans and going to the gym.

Prowling the depths of the Instagram fitness community, you can find some interesting stuff…however mostly for the wrong reasons. There are endless supplies of “motivational” accounts where someone posts pictures of themselves in gym clothes with ridiculously over emotional text like “some days you don’t want to push yourself, you just want to quit. These are the days when you have to truly look at yourself and remind yourself what your goal is” blah blah blah, as they stand in front of the mirror in yoga pants. The same person will have pictures of their face in the car on the way to the gym, maybe talking about their day or week being bad or maybe good. Dozens upon dozens of food pics…and of course the fitness meme pictures where it’s a generic Hallmark quote typed over a background including some form of exercise equipment or maybe someone training.

I have no idea how you are supposed to differentiate these endless clones from one another, but somehow many of them have a huge base of followers who not only read their self indulgent dribble but interact and comment on how greatly this person they have never met has “inspired” them by snapping cell phones pics in the bathroom or sharing pics off a blog. A lot of these “inspirations” are just normal people too who like to exercise or perhaps lost a lot of weight; Nothing qualifies them as being noteworthy in relevance to the bodybuilding or competitive fitness industry in terms of accomplishments or their physique.

Now, the truly scary part is a lot of people pay these people for advice! That’s right, instead of finding a reputable coach who has walked the walked and accumulated years of first hand experience, people are hiring “coaches” based on how many motivational pictures they post. Post enough pictures of healthy food and someone will pay you to tell you what to eat. This is the dark side to the availability that the internet has brought to the coach/client relationship.

It does not make any sense to hire someone mediocre to help you just because they are further along than you are. Learn from the best! Not someone who has only been into the lifestyle you desire for a few months longer than you have.