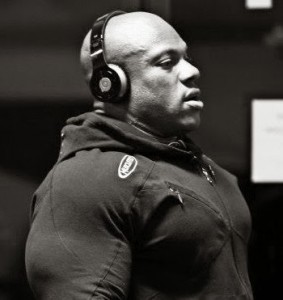 You can take all of the pre-workouts you want or ram smelling salts up your nose. Hell, Craig Titus might have even done a line of coke before his workouts, but for my money, nothing is better than a kick ass playlist full of my favorite jams to fuel me through a training day. We all have our own taste that put us into gear. Legs might need metal, back day might call for rap, and chest day might require 90’s alternative. And if you ask Antoine Vaillant, he goes with Slayer all-day every day.
If you ever thought you were addicted to your Angel Dust or NO Explode and think you can’t workout without a pre-workout jolt, trying losing the power on your iPod in the first 5 minutes of your session.

Talk about completely throwing you off of your game. I’ve actually gone home and recharged my batteries and come back 6 hours later to re-do my workout. Or even better, my iPod broke and didn’t realize it until I walked onto the gym floor. I turned right around, got back in my car, and drove to Walmart to buy another.

Music not only helps keep you in the zone and locked in set after set, but it has an uncanny way of shielding you from the ultra-social crowd at your gym. Maybe it’s just me, but I’ve noticed that more and more people, even hardcore lifters, are spending absurd amounts of time bullshitting with other members in between their sets. If you learn the words to a Korn or Rage Against the Machine album, the odds of one of these clowns interrupting your pump will be greatly reduced, especially if you’re able to mouth the words on rest breaks and toss in some air guitar.

Bodybuilders and athletes are the boring people when it comes to gym music. Can you imagine what is piping through the headphones of the 75 year old man on the stationary bike barely pumping his legs on the pedals as the machine keeps shutting off for lack of activity? I’m just assuming he’s not listening to 2Pac or Metallica, but what could it be? Elvis Presley’s Greatest Hits or does it even go further back with The Temptations?

There has to be a bodybuilder or intense athlete out there with a dirty secret; the kind of secret that would even embarrass Ronnie Coleman. I’m certain there’s a big name, maybe even a Mr. Olympia contender prepping for a contest with a boy band, Miley Cyrus, or The Biebs blasting through his oversized Beats by Dre. If someone has information on the whereabouts of Juan Morel’s iPod, I’m guessing he’s our suspect.

There’s one genre of music that hasn’t quite registered as good gym music to me. I know it’s popular, occasionally I’ll have a friend’s Facebook status pop up on my screen and he’ll be pre-gaming for his workout with techno or dubstep in his car. David Guetta or Deathmau5 both seem to be above my security clearance for good workout tunes. First it’s fast, then it’s slow, then they’re no lyrics, then a girl starts to sing with a melodically repetitive voice that sounds like nails on a chalkboard, and finally…The BEAT drops. Oh, I didn’t forget about Jay Cutler and his attempt at spinning on the wheels of steel. “Jay, you’re killing it.”

Ironically, gyms themselves have really taken a nose dive as far as volume and type of music. It seems like it gets worse and worse each year and I’m the type who switches gym often – they’re all the same. If you go in the morning or afternoon, you might as well just accept that there’s going to be easy listening and a decibel level hardly loud enough to hear. God forbid, you aren’t as stubborn as me if the time comes you forget your headphones or to recharge your battery. And if you ever complain to the front desk people about the music, you would think you’re asking for the nuclear launch codes. I’ve gotten every excuse as to why they can’t change the channel from, it’s on a timer to we can’t cater to everyone, or bring your iPod if you don’t like it. Gyms are so passive aggressive these days, I suppose it’s my fault their music sucks.