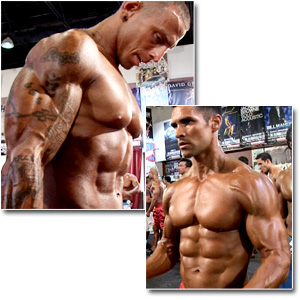 When the idea of Men’s Physique was first launched, there was a lot of uncertainty among the BB’ing and Fitness communities as to what this division would ultimately represent. With brand new judging criteria in place, it would take a few years to demonstrate consistency in its winners and set the tone for what was to come. Now that the standard has been established, competitors have a clear road map to follow in their quest for physique perfection.

At this juncture it has become abundantly clear that MPD is its own entity; subject to a set of judging criteria which differs significantly from Men’s Bodybuilding. Although the competitors are still judged on muscular development, the emphasis has moved to a more balanced aesthetic, in which factors such as hair and skin tone are given greater weight in the overall judging process. This has had a direct influence not only on the competitor’s presentation, but on the types and quantities of drugs which are considered ideal.

This dissimilarity effectively prevents the physique competitor from simply copying the drug protocols of BB’rs, as many of the practices routinely employed by such can have a potentially detrimental effect on the very areas the physique competitor is judged on. Unfortunately, having failed to perceive the importance of a proper education, many jump into PED use prematurely and end up compromising their competitive appearance, sometimes long-term. By taking the time to learn how these drugs affect the body, one will recognize certain traits as being potentially incompatible with the goals of Men’s Physique and increase their chances of success.

Still, there is no rulebook that is universally applicable, as genetic predispositions are capable of invalidating the norm and turning preconceived notions on their head. However, by adhering to certain guidelines and making adjustments based on personal response, some of the pitfalls associated with poor steroid selection can be avoided.

When attempting to determine which steroids are best for you, we must first differentiate between off-season and pre-contest use, as well as side effects which are permanent and those which are only temporary. In terms of permanent side effects, there is really only one which physique competitors need to be concerned with and this is hair loss. This is no knock against you bald guys out there, as I myself am close to being included in that group and couldn’t care less, but when it comes to physique competition, hair matters. Quite frankly, having a full head of hair could make the difference between winning and losing, especially when two competitors are evenly matched in all other aspects. Therefore, it makes sense to stay away from those drugs which have a high likelihood of causing this side effect.

Now, some might argue that hair loss is wholly genetic and that those prone to hair loss are going to lose their hair anyway, so they might as well use any steroid they want. This makes sense until you realize that balding is a gradual process; the rate of which is directly proportional to the level of DHT/androgen exposure. By introducing these hormones into the body at excessive levels, this process can be greatly accelerated, causing men to lose their hair years or even decades earlier than would have happened naturally.

Avoiding this side effect can be tricky, as only personal experience can teach you how your body reacts to these drugs. If you are one of the lucky few who lack the genetic component necessary for initiating hair loss, then you can take anything you want without concern, but most men are genetically susceptible to this condition to one degree or another. The most common cause of hair loss in men is DHT; a metabolite of testosterone. It is responsible for hair loss in the large majority of non-steroid users, as well as those who use steroids. However, in an effort to build additional muscle mass, AAS users typically utilize much larger dosages of testosterone than what would be encountered in one’s natural state. As a consequence, hair loss is accelerated.

DHT levels can be controlled through the concomitant administration of 5-AR inhibitors, which prevent the aromatization of testosterone into DHT, but these drugs are not without side effects. Sexual dysfunction is the most common side effects associated with their use and in some cases, it can persist months after discontinuation, but for many, if they want to use testosterone, this is their only choice. Also, one should keep in mind that these drugs are not guaranteed. Hair loss is still possible, especially when employing lower dosages and/or utilizing large dosages of testosterone.

While testosterone may be the only drug capable of converting into DHT, it is certainly not the only drug capable of causing hair loss. Technically, any steroid can cause hair loss, although some are much more problematic than others. Generally speaking, the stronger androgens are more likely to cause this side effect, while many of the more pure anabolics (i.e. Anavar, Turinabol) are much less risky.

If it were possible to clearly distinguish between those AAS which cause hair loss and those that don’t, I would devise a list for you to use as a reference, but personal response makes this in impossibility. Therefore, as a general rule, I would advise staying away from those drugs which have a reputation for hair loss and gravitate towards those which are generally recognized as safe. If you are unaware of which drugs fall into this category, this information is easily sourced on the Net.

Now that we have addressed hair loss, let’s look at temporary side effects as they relate to off-season and pre-contest drug use. For the most part, the steroids you use in the off-season are relatively inconsequential, as any temporary negative effects will have faded away long before you hit the stage. However, the steroids you use in the weeks leading up to a competition will determine what you look like, so proper selection is crucial.

The main side effects you want to avoid immediately preceding a contest are water retention/bloat, acne, and other complexion issues, such as oily skin, skin discoloration, etc. What do you think the judges would rather see—a bald, bloated, blotchy, acne-ridden guy with oil running down the side of his face…or a guy with a full head of hair, fully visible facial features, and perfect skin tone? This may seem like common sense, but you might be surprised to know how many MPD competitors are running pre-contest cycles rife with compounds that have a high propensity for causing these side effects.

Although personal response can nullify generalities when it comes to drug use, they can still serve us well when used as a rough guide. So, while there are always exceptions to the rule, most pre-contest stacks should be comprised primarily of non-aromatizable anabolics, while the harsher androgens should be avoided, as should the excessive use of aromatizable drugs. The reasoning is simple. Strong androgens, in addition to being more likely to cause hair loss (as mentioned above), also possess the hormonal signal necessary for activating the sebaceous glands, which can cause acne and oil production, while the excessive use of aromatizable drugs will elevate estrogen levels to an unacceptable degree, causing excess water retention.

It could be argued that aromatization is a non-issue, as an A.I. could always be employed to counter estrogen conversion. This is true, but I believe there is a simpler way to go about it. In my opinion, the ideal pre-contest MPD cycle should consist of a low dose of testosterone propionate (150-200 mg/week), as at least some estrogen is needed to maintain a healthy looking skin tone. This should be combined with 2-3 other anabolics; preferably 1-2 oral anabolics and 1-2 injectables anabolics. Some good examples of orals include: Anavar, Epistane, and Turinabol. As for injectables, most people usually find the following drugs to be compatible: Primo, Boldenone, and Dihydroboldenone (1-testosterone).

There is no need to get crazy with MPD cycles. Often, less is more. Something as simple as a test prop, primo, and Anavar cycle can work wonders for a physique competitor, allowing him to come in hard & dry without compromising skin tone. In the end, you selections should be based on what is conducive to goals and needs, not on what is best for someone else.