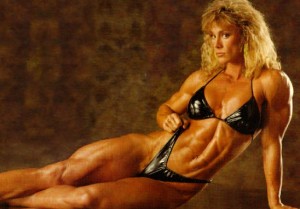 During the last few months a debate has blown up after IFBB announced that MS. Olympia has been cancelled for 2015. Regarding the cancellation I have been trying to come to my own solid conclusion both regarding Ms. Olympia and women’s Pro bodybuilding in general. I had to listen to of both corners of the debate and also include the new divisions like bikini, figure and women’s physique and what they brings to the table before I could come to a solid conclusion. First off, I respect female bodybuilding and I realize that they work their asses off to get where they are, but I am one of them who believe that women’s bodybuilding in general crossed the line in the late 80’s when a more masculine look overtook the femininity.

From a historical perspective women’s bodybuilding became popular a lot later than men’s bodybuilding. In the beginning women more often represented a feminine and athletic look compared with the new looks that arrived in the late 80’s that characterized the future of the division. No one can honestly believe that the idea behind the origins with women’s bodybuilding was to create a female androgenic muscularity that we are too often seeing today. No the core idea was to let muscular femininity and athleticism compete against each other.

Sure there have been some competitors that have been genetically gifted by having a unique DNA composition of great muscularity and femininity at the same time. But let’s face it, not everyone can look like multiple Ms. Olympia winners like Rachel McLish, Corey Everson or Lenda Murray. Additionally the Murray’s and Everson’s physiques and charisma are something that we rarely see today. The popularity around modern version of female pro bodybuilding has declined in the later years – and it’s not just IFBB’s fault – no it’s rather the fans and commercial values that has been diminished. With a declined popularity and with new division like bikini, figure and women’s physique the days are numbered for female pro bodybuilding.

The new divisions that included a more feminine flow have both attracted more females to compete and the organization have grown as far as I know. The popularity of the new fields of fitness has both attracted more females to compete, sponsors to involve more and IFBB has grown as a global organization. Thereby I believe it is good that IFBB are focusing more on femininity when it come to the more recently created divisions. Femininity and beauty that should shine through their muscularity and that made them attractive and great ambassadors for the sport even outside of the fitness industry.

From time to time the new fields of fitness have been criticized at many times for being no athletic enough or that there is no hard work behind those women and especially bikini. This is completely wrong. No one should never either deny that competitors in divisions generally trains hard. If you don’t believe me check out of IFBB Bikini Pro Sara LeBlanc’s training videos for instance. The time for stomping pro bikini or athletes needs to die because they are not taking the easy way out rather the other way around. Many of these women actually have actually a lot better technique during their exercise than male bodybuilders I’ve seen working out.

Furthermore, when I have interviewed and talked to athletes from bikini to women’s physique about their lifestyles answers like these ones are not uncommon: Well I step out of bed at 5 in the morning to get my training and cardio done then I work with clients. After this I go straight home making breakfast for the rest of my family and the rest of the day I go to work and continues following my contest preparation. Talk about determination and dedication to their sport.

My hope is that the trend we are experiencing today will continue grow and that women’s physique continues being a counterpart to women’s bodybuilding to focus more on the balance between muscle, athleticism and femininity. Then of course – the women who want to continue with building the their massive packages – should probably keep on doing it for the passion of it – but I would like to see the feminine flow in my line ups rather than the androgenic attributes.

Let it live but if it were my organization I would have put the division in the history books. I believe in the new Wave of female fitness and femininity behind the symmetry and muscles.
Moreover as a comparison, when it comes to male bodybuilding I remember that Jay Cutler talked about how Bob Paris actually inspired him to start with bodybuilding – but Cutler did what he had to do to become 4 x time Mr. Olympia in a competitive field that meant adding mass, mass and more mass.

The difference to women’s professional bodybuilding is that Jay is a man and not manly attributes altered physiques that belong to men. There might be critics of the development of male bodybuilders as well – but the line has been crossed when females goes for more mass – because that means in the end that they (in general) are erasing the female athleticism in and exchange for the androgenic muscularity.

Conclusively, we got a good thing going in the IFBB and I believe it should continue. I wonder how many young women former Miss Women’s Physique Olympia Dana Linn Bailey motivated to get their ass to the gym – and in the end making them proud of who they are and given them something to believe in. The same goes with our new Olympia WPD champion of 2014 Juliana Malacarne who is doing the same thing and is one of the ambassadors of the Brazilian bodybuilding and fitness wave along with IFBB Figure Pro Larissa Reis and in US the new American Fitness Icon Miss Figure Olympia Nicole Wilkins. Again this is not the case with our recent female pro bodybuilders – and not just now – we are talking about decades.

The new wave fitness divisions are both more inspiring for new contestants and fans to the sport and as a result IFBB is growing globally in a more positive direction.
Final words. Even if Ms. Olympia will re-enter for one last round in 2015 I’m glad for the competitors and fans sake, but I’ll stand my ground and I say, all hail the new female divisions and the idea to keep women looking like women.