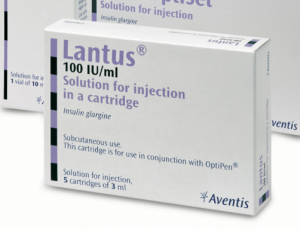 Whenever the topic of insulin comes up, inevitably, someone will ask me which form of insulin is “best”. While generalities may be appreciated by the impatient, they do us no favors in this instance, as experience level, individual need, finances, duration of use, and goals all play a role in determining which form of insulin is ideal. In order to simplify things, we will break down insulin into 3 main categories—short-acting, intermediate acting, and long-acting. Some examples of insulin which fall into the fast-acting group would be Humalog, Novolog and Apidra, while the original Humulin R (regular human insulin) and Novolin are considered intermediate acting. Both Lantus and Levemir fall into the 3rd and final group. Of the later two, Lantus has the longest active life in the body, remaining active for up to 26 hours, while Levemir usually tops out at about 12-16 hours.

Regardless of type, all insulin provides the same basic effects, with duration of action being the primary differentiator. Nutrient transport, increased protein synthesis, decreased protein breakdown, IGF-1 elevation, increased IGF-1 bioavailability, and enhanced vasodialation are the most well known benefits. Still, there are certain characteristics which are unique to each of the various analogs and which make Lantus in particular such an interesting compound for BB’rs.

Out of all the different insulins available, Lantus is probably the most shrouded in mystery. This can be chalked up to both decreased availability and cost, as Lantus is available only by prescription, whereas Humulin R can be purchased from Wal-Mart for about $22 per 1,000 IU vial. With a relatively miniscule number of UGL’s offering the drug, sourcing difficulties have led to diminished real-world use, so there is less collective experience to draw from. There also seems to be less information available on Lantus in general, with most people being unaware of any of its defining characteristics beyond half-life. This is a shame, as Lantus offers some unique benefits not found with other insulins.

With an improved safety profile compared to shorter-acting versions, Lantus can be used without fear of hypoglycemia, even by novice users, assuming some common sense is utilized in terms of dosing. This is made possible by its unique pharmacokinetic make-up, in which insulin-containing microcrystals allow for a steady release of the drug into the bloodstream over an 18-26 hour period. The manufacturer claims there is no peak-effect with Lantus, but real-world experience has proven otherwise. While personal response can vary, many users have found that a slight peak does occur a few hours post-administration. For this reason, BB’rs are better off administering Lantus twice daily in appropriate dosages.

Unlike short-acting insulins, which provide the above-mentioned benefits for just a few hours a day, Lantus will continue shuttling nutrients, increasing protein synthesis, enhancing vasodialation, etc, all day long, even while we sleep. This leads directly to an accelerated rate of growth compared to more traditional insulin programs involving only a single daily injection around workouts. Since maximum growth is the goal, this statement could easily be interpreted to mean that I think Lantus is the better drug, but this is not necessarily the case. Before a claim like this can be made, we need to take into consideration the bigger picture, as BB’ing is not about what we can accomplish in a few weeks, but over several years.

The main downside to Lantus is that it can only be used for short-periods of time, as continuous exposure to elevated exogenous insulin levels will lead to reduced insulin sensitivity, subsequent Glut-4 down-regulation, and impaired endogenous insulin output, none of which are desirable from either a health or muscle growth standpoint. So, while Lantus may be superior for initiating muscle growth over the short-term, we find that things begin to even out in the long-run, as the more commonly employed pre-workout only programs can be used indefinitely without damaging insulin sensitivity to any meaningful degree. This makes Lantus ideal for short blasts, in which the athlete wants to pack on as much muscle as quickly as possible, but it is not suitable for extended use.

Perhaps the most fascinating characteristic of Lantus is its affect on IGF-1/IGF-1 receptors. In multiple university studies, Lantus has demonstrated a much greater binding affinity for the IGF-1 receptor than regular human insulin or any of the other analogs. It is interesting to note that Levemir, the only other long-acting insulin on the market, exhibits reduced IGF-1 binding affinity compared to human insulin. This puts Lantus and Levemir at the opposite ends of the spectrum in terms of binding affinity. While increased IGF-1 binding is generally viewed as a positive thing for muscle growth, it has been the focal point of ongoing debate in the medical community for the last several years, as some studies have shown an increased cancer risk when using Lantus. Since then, other studies have refuted that notion, but the debate continues, with the medical community reluctant to take a stand one way or the other.

Due to contradictory study results, there is also some dispute regarding Lantus’s true affinity for the insulin receptor. One study demonstrated a binding affinity up to 600X greater than regular human insulin, while another revealed a much more modest, but still impressive binding affinity 6-8X greater. Why is this important? A drug’s ability to affect its target receptor is related directly to its affinity. The higher a drug’s affinity for a particular receptor, the more probable binding becomes, while duration of action at the receptor site is often increased.

Insulin’s IGF-1 elevating effects have been well established for some time, but the question in most BB’rs minds is “do the different forms of insulin increase IGF-1 levels to varying degrees? According to recent research, the answer is yes, as patients treated with Lantus were found to have higher IGF-1 levels compared to those who used regular human insulin. With this peptide playing a critical role in the growth and development of muscle cells, this benefit shouldn’t be underestimated. Technically, this should make Lantus the most anabolic form of insulin available.

Taking the above information into consideration, I believe Lantus is best used at large dosages for no more than 2-3 weeks at a time, max. The term “large” is subjective, as what might be large for one person might not be large for another and vice versa. Diabetics use Lantus as a “base” insulin in combination with shorter-acting insulins at meals times. The short-acting insulins are used to control the large rises in blood sugar that take place after meals, while Lantus is typically used to manage the minor fluctuations in blood glucose that occur between meals and when at rest. Obviously, if our goal is to maximize muscle growth, then we want to do more than just manage minor fluctuations in BG. After all, in non-diabetics the body does this well enough on its own.

By constantly releasing small amount of insulin into our bloodstream all day long, which is what happens when using basal doses of Lantus, all we will accomplish is suppression of our natural production (because the body doesn’t need to make as much anymore). Basically, we will be trading our natural insulin for synthetic insulin. What’s the point in that? While natural production will never be completely suppressed in the presence of basal dosages of insulin, we will still receive some benefit, but the results won’t be nearly as good as they could be.

In order to maximize results, insulin levels need to be high enough to facilitate the optimal transport of nutrients into the muscle cell every time we eat a meal, in spite of this suppression. However, the dose should never be so high that blood sugar drops dangerously low in-between feedings. Obviously, this will take some practice, so always work your way up slowly. I am not going to warn you about the dangers of insulin overdose. If you need to be educated about that, you are not ready for this type of program. So, if you haven’t yet figured it out, this program is for advanced users only…not because it is inherently dangerous (because it’s not if you know what you’re doing), but because I refuse to be responsible for some jack-ass who throws caution to the wind and ends up in the hospital while blaming Mike Arnold for his woes.

I suggest splitting up your daily doses in the following manner. Take 65% of your daily dose upon awakening and 35% of your daily dose 12 hours later. This will reduce the peak that occurs with your 2nd daily dose, which is important because you will be asleep at the time and unable to manage it through food intake. While I did say earlier that Lantus only results in a small peak—usually a few hours post-injection—it is important to realize that as the overall daily dosage rises, so too will the intensity of the peak. Therefore, it makes sense to take your largest dose in the morning and a smaller dose at night.

During the time Lantus is active, you will need to eat at least 6-7 meals daily, including a meal right before bed. This will keep glucose and aminos pumping throughout your system, which will not only help prevent hypoglycemia, but will optimize muscle growth. I suggest following a traditional clean (lower-fat) diet during this time, as doing so will help minimize fat gain in those who are prone. Growth hormone makes a great addition as well, due to its significant and sustained lipolytic effect. Lastly, I always recommend insulin sensitizers be used with these kinds of programs, as they prevent/minimize the decrease in insulin sensitivity that normally accompanies their use. Metformin and berberine are two of the best and can be purchased at a low cost, although metformin will require a prescription. 500 mg of each, 2-3X per day, will suffice.