One of my favorite quotes goes as follows, “Idle hands are the devil’s playground”. What this quote is attempting to get across is that when a person is complacent or bored, they tend to make bad decisions resulting in negative outcomes. The quote reminds me of top level bodybuilders who decide to take an entire year or more off from competing between shows. This may in some ways sound like a good idea, but it rarely works out for the best unless you are Mr Olympia.

It seems that when a competitor takes such an extensive amount of time off between shows, they inevitably end up overdoing something in preparation for their return show, or at the very least getting psyched out by this return show. Taking a year or more off puts undue pressure on the athlete from several different sources including his or her self. This often tragic mistake is exemplified perfectly by the anticlimactic career of Kai Greene.

Kai Greene has been in the pro ranks for many years. He first became a talked about threat in 2007, sporting decent size, spectacular lines, and otherworldly conditioning. Kai went on to win a few small shows before really breaking into the upper echelons of bodybuilding by winning the Arnold Schwarzenegger classic in 2009. Much to the bodybuilding worlds pleasure, Kai returned to this show in 2010 to battle a rapidly improving Phil Heath, where Kai would once again take top honors at the second largest show in our sport, albeit in a controversial fashion. Nonetheless, Kai had established himself as the clear cut number one contender for the Mr. Olympia title. However, after that 2010 Arnold victory Kai Greene’s hands became idle, and the devil began to have his way with Kai’s placings. Kai took an extremely disappointing 7th place at the 2010 Mr. Olympia, coming in much too heavy. This out of character showing may have been his initial reasoning for shunning the Arnold Classic and focusing on the Olympia for the remainder of his career. 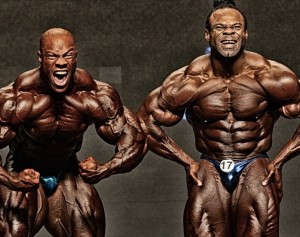 Kai skipped the Arnold in 2011, opting to instead enter into the New York Pro, which would be similar to Lebron James enrolling into a co-ed high school basketball tournament. That years Arnold saw a 97% Branch Warren beat out Dennis Wolf, two guys that would have had little hope against an in shape Kai. Obviously Kai’s momentum going into that years Olympia (where he placed a disappointing 3rd) would have been far greater coming off an Arnold win in comparison to a New York Pro win. 2012 was a similar year for Kai, minus the New York Pro. He once again opted out of the Arnold and focused solely on the Olympia. The 2012 Arnold was won by a 90% Branch Warren who would have had no chance against Kai. Kai and Branch have a similar physique in that they have packed more muscle on their frames than one would ever think possible. That said, Kai does have slightly better shape, and far superior muscle separation. For these reasons, unless Kai is way off a la the 2010 Mr O., Branch has as good a chance against him as Mike O’Hearn successfully convincing us he is natural.

Kai went on to finish 2nd to Phil at the 2012 O, looking the best he had since the 2010 Australian Pro, but still lost to Phil quite handedly in the eyes of the judges. Apparently Kai does not learn from his mistakes, as 2013 was an exact replica of 2012. He skipped the Arnold which was won by a 90% Dexter Jackson, who would have looked like a middleweight next to Kai, while Kai displayed similar condition to Dexter. Instead, Kai came into the 2013 Olympia far too heavy, yet again taking a distant 2nd to Phil. Kai continued his complacent ways this year, choosing to once again shy away from the Arnold classic, only to watch a 95% Dennis Wolf take the title. One would be hard pressed to find a person in our industry who feels that Kai would not have easily toppled Dennis last March in Columbus. When Kai and Dennis turn their backs to the judges in order to display their back shots, Kai begins to make Dennis look like a scarecrow as you scratch your head wondering how Kai got his lats to attach at the hip.

It is not out of the realm of possibility that Kai, had he chosen to compete in the Arnold for the last half decade, could have six Arnold Classic wins, smashing the current record of four held by Flex Wheeler and Dexter Jackson. Placing 2nd at the Mr. Olympia multiple times will leave you with a mountain of fans along with a powerful legacy. Unfortunately for Kai, both of these credentials pale in comparison to being the most decorated Arnold Classic champion of all time. Kai seems to have little regret about skipping the Arnold all these years. However, it may behoove younger competitors to take note of how Kai’s decisions altered the way his career would ultimately unfold. Some may say that this argument will be a mute point if Kai manages to defeat Phil at the 2014 Mr. Olympia, but I disagree. No matter how you slice it, had Kai been participating in the Arnold all these years, he would currently be the owner of at least five Arnold Classic trophies, victory at the Olympia this year or not.