Is Testosterone King of Anabolic Steroids? 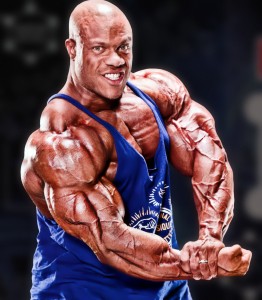 As the most widely used drug in BB’ing, testosterone’s rise to dominance did not take place by chance. For over a generation it has been proving itself in the real-world; taking size and strength to never before seen levels in bodybuilders and strength athletes alike. However, it was not until recently that we began to explore and understand the mechanisms by which testosterone produces such powerful effects. This has prompted many scientists to further elucidate on the subject, bringing a greater awareness of testosterone’s ability to enhance the muscle growth process.

At first glance, testosterone doesn’t appear to possess any characteristics capable of securing the #1 spot among performance enhancing drugs. According to Androgens and Anabolic Agents, the traditionally accepted steroid reference guide authored by Julius Vida, it possesses an anabolic rating of 100. This is considered fairly mediocre by today’s standards, as numerous AAS have exceeded the 1,000 mark and few have even reached a lofty 10,000. In terms of overall side effects it is quite harsh, requiring the concomitant use of ancillary drugs in order to prevent/minimize them.

While testosterone may fall short in these areas, an evaluation of the bigger picture reveals a drug that works through multiple pathways, providing a synergistic effect that is greater than the sum of its parts. In addition, although the side effect profile associated with testosterone use is extensive, it is not a hindrance to optimal dosing, as the majority of its side effects are either cosmetic in nature, or relatively mild in their impact on the internal organs. This allows testosterone to be administered at far larger dosages than would be possible with most other steroids, directly increasing its muscle building potential.

The primary pathway by which testosterone mediates its muscle building effects is through increased protein synthesis via androgen receptor binding, but in order to understand how this works, we must first understand what receptor sites are and what their role is. Receptor sites are proteins which lie on the surface of every cell, serving as docking ports for circulating chemical messengers, such as steroids. Upon uniting with one of these chemical messengers, the receptor receives a set of instructions, or message encoded within that particular chemical. This message is then relayed to the nucleus of the cell, initiating a series of physiological and biochemical changes associated with that chemical.

In this case, the androgen receptor is a receptor site specific to the family of steroid molecules, which is responsible for mediating the physiologic effects of AAS by binding to specific DNA sequences that influence transcription of androgen responsive genes. Most of the outward effects we experience when using steroids, both good and bad, are a direct result of it binding with the androgen receptor.

In addition to AR binding, testosterone also increases levels of Insulin-like growth factor, or IGF-1. Displaying structural and functional similarities to insulin, IGF-1 is normally produced in the liver via growth hormone and demonstrates both direct & indirect anabolic activity through several mechanisms, as well as anti-catabolic effects. IGF-1 also plays a role in satellite cell proliferation and differentiation, potentially resulting in the creation of new muscle cells. More commonly, satellite cells are involved in myonuclear accretion, which we will discuss more in second. Lastly, IGF-1 increases nutrient transport into muscle cells, accelerating protein synthesis and enhancing the recovery and growth process.

IGF-1 is considered one of the “Big 4”, which also includes steroids, growth hormone, and insulin. Today, exogenous IGF-1 is widely sold on the grey-market by peptide/research chemical companies and is frequently included in the programs of many. While exogenous IGF-1 is capable of elevating blood levels of this hormone to a far greater degree than what is seen with exogenous testosterone administration, the increase is still significant, with many achieving a blood level in the low supraphysiological range. It should also be mentioned that unlike the LR3 variant, which is the most commonly used form of exogenous IGF-1, the body will not desensitize to the IGF-1 which is produced as a result of testosterone administration.

Lest anyone assume that this IGF-1 elevating effect is universal to all AAS, let it be known that this is not the case. On one particular study designed to evaluate the effects of both testosterone and nandrolone on IGF-1, the study results show that only testosterone increased IGF-1 levels. However, it is interesting to note that while nandrolone had no effect on IGF-1 levels, it did decrease IGFBP-3 levels; an IGF-1 binding protein which prevents IGF-1 from being used by the body. These study results indicate a possible synergistic effect between these 2 steroids, providing merit for the traditional Test-Deca stack.

Research has also demonstrated the ability of testosterone to increase androgen receptor density (the number of androgen receptors in muscle tissue), thereby increasing the amount of testosterone (or other AAS) which can be effectively utilized by the body. Basically, this effect increases the body’s growth potential. Generally speaking, this benefit will only apply to very advanced BB’rs using large dosages of testosterone and/or other AAS. Still, the ability to modify one’s existing genetic capacity for muscle growth contributes to testosterone’s overall allure among the more hardcore crowd.

One interesting effect of testosterone that was recently brought to my attention by Muscular Development columnist and M.D., Daniel Gwartney, is testosterone’s role in myonuclear accretion. Basically, this term is used to describe an increase in the number of nuclei present within muscle fiber. Why is this significant? Most cell types contain a single nucleus. However, muscle fiber contains an extensive number of myonuclei, which work together to control the programming, function, and development of the fiber. With each nuclei being capable of governing a set portion of each muscle fiber, the number of nuclei present will determine the total amount of muscle volume which can be managed. Therefore, there is a direct correlation between nuclei count and growth potential. The more nuclei a muscle fiber contains, the bigger it can get.

A single human muscle fiber can contain as many of 10,000+ myonuclei, with this number remaining more or less static throughout one’s lifetime. However, supraphysiological testosterone use can increase this number, improving our genetic capacity for muscle growth. More so, once these additional nuclei have been acquired, they remain are permanent fixture of the muscle fiber, regardless of drug or training status.

Another pathway by which testosterone can augment the muscle growth process is through increased satellite cell activity. Upon activation, these cells can contribute to muscle hypertrophy in 3 different ways; by providing additional myonuclei to existing muscle fibers (as explained above), by differentiating into new muscle fibers (hyperplasia), or by fusing to currently existing muscle fibers, thereby assisting in growth & repair process. This effect is dose-dependent, with higher doses leading to greater increases in activity. In one particular study, satellite cell activation continued to increase at each subsequent dosing point of 125 mg/week, 300 mg/week, and 600 mg/week. This highlights the importance of total dose in maximizing this growth pathway, although at this juncture we can only speculate regarding the point of diminishing returns.

Next, let’s take a brief look at the non-genomic actions of testosterone. Non-genomic actions of AAS are mediated via non-AR pathways and therefore lack the typical gene transcription actions associated with that pathway. Rather, they involve second messenger participation and demonstrate a rapid onset of action; usually only seconds to minutes. Furthermore, non-genomic actions of AAS differ from the genomic in that they require the constant presence of the hormone in order to continue exerting their effects. Once the hormone is removed, its effects cease.
One such example is the ability of testosterone to improve force production via a direct and acute effect on calcium- dependent components involved in the contractile process. In comparison to AR-mediated effects, the non-genomic actions of testosterone have been poorly investigated, with scientists just now beginning to understand how some of these pathways work to affect muscle growth and function. Further research needs to be conducted in this area before we can fully expound on this mechanism of action.

The ability of testosterone to initiate muscle growth through multiple, independent growth pathways, along with its improved safety profile at higher dosages, combine to create what many claim is the “King of the Steroids”. While this claim is certainly open to dispute, there can be no doubt that testosterone is one of the most myotropic drugs in existence when used within an optimal dosing range. Its reputation as a mass and strength drug par excellence is well-deserved, with the majority of today’s BB’rs including some form of testosterone in every cycle they run. If your goal is to build your physique to its maximum potential, be prepared for this steroid to play a central role in your PED regimen from this point forward.
.