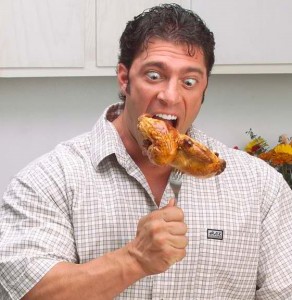 The term “Offseason Bodybuilder” used to be synonymous with gigantic bloated physiques, offering a stark contrast to the dry and shredded anatomy charts that were presented on stage. There was something enamouring about the larger than life scale that some bodybuilders would blow their physiques up to in their pursuit of the ultimate amount of muscle. While no one would ever say most top professional bodybuilders “blend in” in public, a near contest ready physique for most is much less noticeable in baggy clothes, and if it wasn’t for the width of shoulders they could pass for just being overly athletic if you don’t have time to observe the veins on any exposed limbs. The quintessential “bulking” professional bodybuilder is entirely a different story; Even moderate amounts of fat mass and excess water can take them from swimming in a XXXL shirt to pushing it to it’s utmost maximum capacity. The insane roundness is undeniable.

Trying to pinpoint when this extreme dichotomy in physical appearance between the two seasons of a bodybuilder became common place is difficult, as we can trace stories back pretty much to the beginning of competitive bodybuilding that include insane consumptions of whole milk and other calorie dense foods. When it became the most noticeable in my opinion was the 90’s-2000’s. Although body weight has zero bearing on the success of a bodybuilder in performance and offers really no indicator of the quality of physique causing the gravitational pull, weight has been somewhat of an obsession amongst lifters in a similar, borderline disorder based manner that a woman with an eating disorder will struggle with except in the opposite direction. For many years the thought of a 250lb physique that was composed of mostly muscle tissue was very extreme and considered the absolute peak of mass potential. Well, it didn’t last too long as it was just a matter of time before bodybuilders set their sights on the magical “300lb” number and it became almost a cliche to hear a competitor claim to be 300lbs off season. Bodybuilders were doing everything in their power to hit this number, as somehow it became common belief that being 300lbs in the offseason would ensure some kind of success once stripped down to the stage. While we touched on bodybuilders “bulking” for many generations the overall consensus slowly gravitated towards the offseason being the time when you just get as big as humanly possible.

One thing was for sure – People were getting bigger. In the 1970’s and 1980’s it was just as common to see an offseason bodybuilder actually look deflated and smaller than they were at their big contest for the year, and many of them (once they had achieved the level of development that would have them at least in the competitive range) would have a very mild drug regime until they began preparation for their show. While this definitely worked for them, it didn’t allot for any serious size jumps from one contest to the next. Not only were the mindsets different in the following “300lb” era, the drugs were too. We saw insulin use skyrocket and it was utilized in a much greater and more effective fashion that it was before. While of course nothing has come along that would even threaten the use of AAS for overall muscle gain, there is no denying that insulin can add tons of weight to a body in a relatively short amount of time. The use of this storage hormone which would shuttle nutrients into muscles (and also store any excess calories as fat) along with the kitchen sink approach to food consumption that many adopted in the offseason resulted in overall immense physiques, and also resulted in a lot of excess weight that needed to be lost come contest time. It was not a pretty time for bodybuilding, but as everyone was chasing the massive Dorian Yates and Ronnie Coleman, people were desperate to do whatever they felt necessary to be a comparable size.

Fast forward to present day. So much has changed in bodybuilding and most of it can be directly credited to the internet. While a bodybuilder in 1996 could balloon up to the size of a water logged gorilla for most of the year and then simply schedule their photoshoots and guest spots close to their competition date (or guest pose in fully loaded beached whale mode, which happened as well), todays athlete has the constant pressure of being in the public eye at all times. With everyone having cameras in their pocket and also a large portion of many endorsement deals dependent on the amount of social activity a bodybuilder keeps up, it is arguably bad for ones to career to slap on 50lbs in a short period of time and have to read the comments about their triple chin. Some bodybuilders definitely keep themselves tighter than others, but overall the trend has definitely been keeping things in a more presentable package more or less the entire year.

Many successful bodybuilders claim that most athletes will have to endure one extreme “bulk” at least to reach the size they so desperately desire, and there could definitely be some arguments made that it is the quickest and most effective way to add muscle mass as it leaves no room for doubt about if you are consuming enough food or not to allow muscles to grow at the fastest rate. I think most would agree it is definitely a lot of strain to put on the human body however and longevity could be compromised by pushing this avenue too far too often. The other side of the fence claims that a leaner body is a healthier body, and not only will a body grow more efficiently if it is lean but also that the stress of anabolic hormones and other bodybuilding necessary evils will be dampened when you aren’t loading them into a bloated body where blood pressure and other general health markers are compromised. There is an undeniable fact that if a bodybuilder reaches the monstrous offseason size with a diet laden in processed sugars and other junk foods that it will definitely contribute to any possible health issues down the road, of course some having better luck than others.

It’s an interesting debate, and over the last few years it would definitely appear that the “Stay lean” mentality has grown in popularity and is probably the more widely used approach. I think we will continue to see more of a focus be put on this ideology as the sport becomes more intertwined with social media and the ever watching eye of the connected fan. The real two questions that we will only see answered over the next decade and beyond are A) Will we see and overall decrease in size or have we truly wisened up and learned a better method and B) Will this change of offseason mindset result in less health problems long term for bodybuilders. Only time will tell.