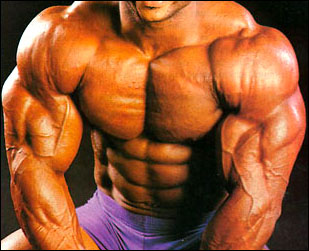 There are a number of hormones that can impact muscle growth other that the obvious class of anabolic/androgenic steroids. Human growth hormone, insulin growth factor, and insulin are all known for their role in increasing muscle mass. These hormones work synergistically with one another, and if any one is deficient, it can hinder the muscle building process. There is another group of hormones that is a necessity for maximizing muscle growth, and this is the thyroid hormone. Bodybuilders have long used thyroid drugs leading up to a contest for fat loss, but rarely has it been viewed as a drug that can increase muscle mass.

Most have heard of the thyroid gland, but not everyone knows its purpose. The thyroid gland is a very sensitive gland that regulates many processes in the human body. This gland is located at the top part of the neck, and produces several hormones that are crucial in how a person looks and feels. Among the hormones is a substance called thyroxine or tetra-iodothyronine, also known as T-4. The action of T-4 is indirect for the most part because in part it will be transformed into triiodothyronine, or T-3, which is the more physiological active of the two. Not all of the T-4 is immediately converted to T-3 and will act as a reserve for future use.

Only about 20% of T-3 produced comes from the thyroid gland. The rest is converted from T-4, which takes place in tissues such as the liver, heart, muscles, and central nervous system. Thyroid hormones are the determining factor for basal metabolism, which is very important for bodybuilders. The more thyroid hormones that are present and active, the more calories the body will burn, particularly in the form of heat.

Thyroid hormones have the potential to be anabolic or catabolic. Many bodybuilders that are dieting for a competition make the mistake of dosing thyroid medications too high. This mistake will often cause muscle wasting, and the bodybuilder will end up with less muscle mass than he intended to have on contest day. Thyroid drugs have been used for decades by bodybuilders during cutting cycles. There has never been a question regarding the ability that thyroid hormones possess in cutting body fat, but they have not received enough attention for their ability to add muscle.

T-3 in slight increases has been shown to increase the number of sarcoplasmic reticulum, which controls muscle contractions and energy producing mitochondria. T-3 has also been shown to increase the muscles production of myosin, which is one of the major contractile proteins in muscle. T-3 also has the ability to activate genes and increase protein synthesis in the muscles, making it anabolic. Since T-3 stimulates carbohydrates metabolism, it can increase the absorption of glucose by the intestine, increase the uptake of glucose by cells, and increase glucolysis. In glucolysis, the excess glucose is broken down by the mitochondria to produce more ATP.

At a low dose, T-3 provides an anabolic setting for muscle growth. It acts on the liver to increase the destruction of the adrenal glucocorticoids, such as cortisol, which can cause protein destruction.

Human growth hormone is important for fat metabolism, joint repair, and muscle repair. HGH is vital for many processes that take place in the body. After about the age of twenty-five, endogenous HGH starts to decline at a rapid rate. Many hormone replacement clinics have recognized the need for HGH replacement for its aging client base. What many fail to realize is that exogenous HGH can lead to a state of hypothyroidism. So, while a very important hormone such as HGH is elevated, a just as important hormone, the thyroid has declined. This is not a beneficial trade-off by any means. Many hormone replacement clinics will often prescribe testosterone along with HGH, and this can offset the declined thyroid levels a bit. It is thought that HGH cannot induce muscle growth with being accompanied with testosterone or another steroid.

My thought is that HGH can create an anabolic environment without steroids if testosterone levels are in a normal range, and T-3 is taken with it. The lowered thyroid levels when taking HGH alone could be to blame for the drug not having much of an impact on muscle growth.

T-3 has the potential to be anabolic or catabolic. This is determined by the dosage. Most people that have used T-3 have experienced, at the very least, a mild catabolic effect at some point. T-3 has a half-life of about 60 hours. This means that a 25mcg dose will have a remaining 12.5 mcg of the drug after 2 ½ days. This can result in blood levels getting very high very fast. After just 4-8 weeks of using this drug in pyramid fashion, which is how it is commonly used, a person will be in a catabolic state rather quickly. Knowing that T-3 has a half-life of 2 ½ days, it should be taken accordingly. To get a true anabolic effect from T-3, it should be dosed at just 25mcg-50mcg every third day.