How Strong Are Bodybuilders? 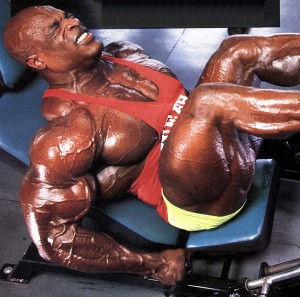 The average power lifter will laugh like an intoxicated Will Ferrell fan watching Step Brothers if asked whether or not bodybuilders are as strong as power lifters. The answer to this question seems obvious at first glance. Of course power lifters are far stronger than bodybuilders! Their sole purpose in the gym is strength, whereas bodybuilders only care about the cosmetic effects of training. However, this fails to paint the entire picture.

When analyzed closely, taking body weight ratios into account, bodybuilders give power lifters a serious run for their money (which they obviously earn outside of power lifting). There is something to be said for the fact that amongst a few other factors, muscle is what generates strength, and bodybuilding is of course, all about building more and more muscle.

Some prime examples of superhuman strength coming in the form of bodybuilders are Akim “Big Ak” Williams, Kevin “The Maryland Muscle Machine” Levrone, Stan “The White Rhino” Efferding, and of course, “The Big Nasty” himself, Ronnie Coleman. Akim, who is purely a bodybuilder, has been filmed squatting 620 lbs. for five reps, below parallel, with no belt, weighing less than 250 lbs.! Kevin has been filmed bench pressing 500 lbs. for five smooth reps, weighing roughly 250 lbs., inside of two weeks from the Mr Olympia! Unless you have been living under a rock, you have undoubtedly seen The Big Nasty dead lift 805 lbs. for two fairly easy reps, five weeks out from the Mr. O. Last but certainly not least, as mentioned earlier, IFBB pro Stan Efferding has totaled 2303 lbs. in competition. This just may be the greatest 275 lb. class raw power lifting total our planet has ever seen!

How many sub 250 lb. power lifters can squat 620 for five reps below parallel, without wearing a belt, or bench press 500 lbs. for 5 reps after being on an extremely restricted diet for several weeks? In Ronnie’s case, how many men under 300 lbs. can pull 805 for two smooth reps? The most critical question here, is what kind of numbers would these men put up if they simply focused on power for a few months? What if Kevin was eating like a strength athlete, instead of an Olsen twin when he performed that set? What if Ronnie focused solely on his dead lift for a few months? What would The Big Nasty pull weighing a “mere” 300 lbs.? Certainly over 900 pounds. It would not be out of the question for him to flirt with the highest pull of all time (which was done by a man weighing 80+ lbs. more than him).

The idea that power lifters are much stronger than bodybuilders is commonly, and falsely, reinforced by power lifters making it clear whenever a chance arises. “They might be ripped and jacked, but who cares? They aren’t that strong.” I challenge any one of the millions of power lifters who love to repeat this line time and again, to go back in time and train legs with Tom Platz, or any body part with Tom Prince. These two Toms would have them eating humble pie in a fashion Furious Pete Czerwinski would be proud of. Speaking of pie, power lifters would have much greater body weight ratios if they would refrain from packing it away, along with similar foods, in a fashion resembling Rosie O’donnell on the rag.

After watching the lean, carefully sculpted physiques of Akim Williams, Kevin Levrone, Stan Efferding, and the great Ronnie Coleman, throw around bone crushing weights in the gym, one begins to wonder if power lifters may be missing out. Many power lifters spend little to no time attempting to improve anything aside from strength and power, including lean mass and body composition. Not only does lean mass exponentially increase strength, but the fact that bodybuilders focus on the mass being “lean” also increases their body weight ratios with regards to lifts (an important factor in the sport of power lifting, to say the least). Unfortunately, it is clear to see that more often than not, power lifters are about as concerned with their body composition as jolly old Saint Nick. In fact, looking at the overabundance of big beards and big guts in the world of power lifting, it is possible that Santa has some impressive numbers in the gym!