How Many Eggs Can You Safely Eat? 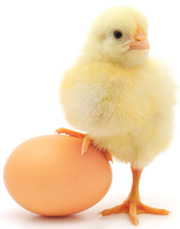 Woman With Basket of EggsEggs are among the most nutritious foods on the planet.
Just imagine, a whole egg contains all the nutrients needed to turn a single cell into an entire baby chicken.
However, eggs have gotten a bad reputation because the yolks are high in cholesterol.
In fact, a single medium sized egg contains 186 mg of cholesterol, which is 62% of the recommended daily intake.
People believed that if you ate cholesterol, that it would raise cholesterol in the blood and contribute to heart disease.
But it turns out that it isn’t that simple. The more you eat of cholesterol, the less your body produces instead.

Let me explain how that works…

How Your Body Regulates Cholesterol Levels

Cholesterol is often seen as a negative word.

When we hear it, we automatically start thinking of medication, heart attacks and early death.

But the truth is that cholesterol is a very important part of the body. It is a structural molecule that is an essential part of every single cell membrane.

It is also used to make steroid hormones like testosterone, estrogen and cortisol.

Without cholesterol, we wouldn’t even exist.

Given how incredibly important cholesterol is, the body has evolved elaborate ways to ensure that we always have enough of it available.

Because getting cholesterol from the diet isn’t always an option, the liver actually produces cholesterol.

But when we eat a lot of cholesterol rich foods, the liver starts producing less (1, 2).

So the total amount of cholesterol in the body changes only very little (if at all), it is just coming from the diet instead of from the liver (3, 4).

What Happens When People Eat Several Whole Eggs Per Day?

For many decades, people have been advised to limit their consumption of eggs, or at least of egg yolks (the white is mostly protein and is low in cholesterol).

Common recommendations include a maximum of 2-6 yolks per week. However, there really isn’t much scientific support for these limitations (5).

Luckily, we do have a number of excellent studies that can put our minds at ease.

In these studies, people are split into two groups… one group eats several (1-3) whole eggs per day, the other group eats something else (like egg substitutes) instead. Then the researchers follow the people for a number of weeks/months.

These studies show that:

It appears that the response to whole egg consumption depends on the individual.

In 70% of people, it has no effect on Total or LDL cholesterol. However, in 30% of people (termed “hyper responders”), these numbers do go up slightly (18).

That being said, I don’t think this is a problem. The studies show that eggs change the LDL particles from small, dense LDL to Large LDL (19, 20).

People who have predominantly large LDL particles have a lower risk of heart disease. So even if eggs cause mild increases in Total and LDL cholesterol levels, this is not a cause for concern (21, 22, 23).

The science is clear that up to 3 whole eggs per day are perfectly safe for healthy people who are trying to stay healthy.

Bottom Line: Eggs consistently raise HDL (the “good”) cholesterol. For 70% of people, there is no increase in Total or LDL cholesterol. There may be a mild increase in a benign subtype of LDL in some people.

Many studies have looked at egg consumption and the risk of heart disease.

All of these studies are so-called observational studies. In studies like these, large groups of people are followed for many years.

Then the researchers use statistical methods to figure out whether certain habits (like diet, smoking or exercise) are linked to either a decreased or increased risk of some disease.

These studies, some of which include hundreds of thousands of people, consistently show that people who eat whole eggs are no more likely to develop heart disease. Some of the studies even show a reduced risk of stroke (24, 25, 26).

However, one thing that is worth noting, is that these studies show that diabetics who eat eggs are at an increased risk of heart disease (27).

Whether the eggs are causing the increased risk in diabetics is not known. These types of studies can only show a correlation and it is possible that the diabetics who eat eggs are, on average, less health conscious than those who don’t.

This may also depend on the rest of the diet. On a low-carb diet (by far the best diet for diabetics), eggs lead to improvements in heart disease risk factors (28, 29).

Eggs Have Plenty of Other Health Benefits Too

Let’s not forget that eggs are about more than just cholesterol… they’re also loaded with nutrients and have various other impressive benefits:

They’re high in Lutein and Zeaxanthine, antioxidants that reduce your risk of eye diseases like Macular Degeneration and Cataracts (30, 31).

They’re very high in Choline, a brain nutrient that over 90% of people are lacking in (32).

They’re high in quality animal protein, which has many benefits – including increased muscle mass and better bone health (33, 34).

Eggs also taste amazing and are incredibly easy to prepare.

So even IF eggs were to have mild adverse effects on blood cholesterol (which they don’t), the benefits of consuming them would still far outweigh the negatives.

Bottom Line: Eggs are among the most nutritious foods on the planet. They contain important brain nutrients and powerful antioxidants that can protect the eyes.

How Much is Too Much?

Unfortunately, we don’t have studies where people are fed more than 3 eggs per day.

It is possible (although unlikely) that eating even more than that could have a detrimental effect on health. Eating more than 3 is uncharted territory, so to speak.

However, I did find an interesting case study (a study with only one individual). It was an 88 year old man who consumed 25 eggs per day.

He had normal cholesterol levels and was in very good health (37).

Of course, a study of one doesn’t prove anything, but it’s interesting nonetheless.

It’s also important to keep in mind that not all eggs are the same. Most eggs at the supermarket are from chickens that are raised in factories and fed grain-based feeds.

The healthiest eggs are Omega-3 enriched eggs, or eggs from hens that are raised on pasture. These eggs are much higher in Omega-3s and important fat-soluble vitamins (38, 39).

Overall, eating eggs is perfectly safe, even if you’re eating up to 3 whole eggs per day.

I personally eat 3-6 whole eggs per day (about 30-40 per week) and my health has never been better.

Given the incredible range of nutrients and powerful health benefits, quality eggs may just be the healthiest food on the planet.