Growing Into a Contest 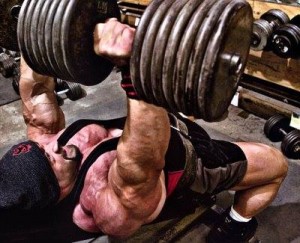 From the dawn of bodybuilding, bodybuilders have been trying to find the right recipe for peaking at a contest. For decades, bodybuilders appeared close to contest shape on a year-round basis. Then, out of the gloomy streets of Birmingham, England a “Shadow” appeared. A monster named Yates would reinvent the game of bodybuilding. In fact, he helped coin the phrase, “size game,” as a new generation would try to play catch up to Dorian and his new level of size and density never seen before on a bodybuilding stage. With this new development of mass monster came the rise of the guru and along with that came a myriad of strategies to arriving not only peaked, but massive to boot.

The first school of thought to gaining muscle was basic. Eat as many calories as you could manage and then diet for a long and hellish 16 weeks; with the hopes of bringing in a newer, bigger, and better “package” at your next outing. Soon, pictures of a tubby Lee Priest would start to traverse the community with images of a cheeseburger hanging out of his mouth. Even the greatest ‘Blonde Bombshell’ of our time, Jay Cutler was known for looking more like Governor Christi than Govern Schwarzenegger. That is until Generation Heath took over and created and then reinvented the meaning of ‘growing into a contest.’ Stay small in the offseason; look relatively amateurish and then transform into an elite bodybuilder before all of our eyes. Or in more bro-science terms, achieve the Holy Grail – add muscle, lose fat, and complete the ultimate ‘recomp’.

Today, nearly every top IFBB pro is trying to utilize this method to present the tightest and most eye popping physique on the circuit. Take one look at Shawn Rhoden in the off season and you’ll see a full blow, novice amateur. He Rip Van Winkle’s for the entire off season and then 4 months of contest prep – on the verge of exploding out of his skin. Growing into a show is not only in vogue this generation, it has become the preferred method to staying healthy as a bodybuilder.

Bodybuilding: ah yes, the once healthy endeavor sought out by our fathers of iron and muscle. By the late 90’s, we were knee deep in the size game and on the cusp of the bloated bodybuilder. It all came to a head in the early 2000’s, as guru’s recognized it wasn’t he brightest tool in their arsenal to get these finely tuned machines too portly in the offseason, no matter how much GH they were running.

By the time 2006 had come and gone and Ronnie Coleman was in the rearview mirror for active competitors, there really only remained one other monster, Jay Cutler. Jay would have continued what Ronnie left, had it not been for Dexter Jackson. Dexter’s win in 2008 proved that you didn’t need the mass to be world’s #1. It was exactly the point that Shawn Ray had been expressing throughout his career in the 90’s. Instead of Dexter Jackson being the trailblazer for a new breed of bodybuilder, it turned out to be Phil Heath.

Heath is the type of bodybuilder that can easily travel around the world, while focusing on just the last 12-14 weeks before the Olympia, where things get serious. Once Heath reached a level of size and conditioning to be competitive at the top of the sport, he quickly recognized that he didn’t need to punish his body the entire calendar year. And like all generations in the IFBB, everyone copies what they see. Everyone copied Dorian and Ronnie and now everyone is copying Phil’s lead. To achieve his look, the answer is growing into a show.

However, it doesn’t work for everyone. The key seems to lay with where you are genetically with your physique. If you’ve maxed out your physique, then there’s a good chance that you should grow into a contest. The days of you putting on 35lbs in the off season, to net 10lb is long behind you. Dennis Wolf has said time and time again he’s found his best success to stay 20lb above his contest weight in the offseason, making for easier contest prep. The results have spoken for themselves, as Wolf is clearly the #3 bodybuilder in the world. But growing into a contest isn’t the best idea if you still have room to grow. Tall bodybuilders and guys with large structures probably still have room to pack on the mass. Coasting in the offseason and wasting precious time would likely be unwise.

Very few bodybuilders have what bodybuilders like Juan Morel or Shawn Rhoden have. These guys are the best of the best in terms of genetics. They can gain weight, lose weight, and maintain depending upon the dinner they eat that night. Following the guidance of a person like this might be irresponsible for just about anyone. If you want to grow into your show, look at your body, look at your drug protocol, but more importantly look at your results from the past. What you do today, won’t necessarily work tomorrow. Even Jay Cutler eventually stopped perma-bulking.