Gabe Moen versus The Gurus 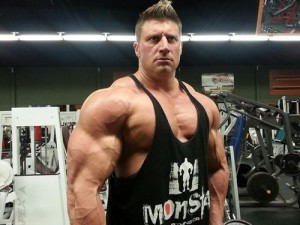 Super heavyweight national level competitor Gabe Moen has been a well known name in the amateur bodybuilding ranks for several years now. Standing over 6 feet tall, Moen is one of the more physically imposing individuals currently in contention for a pro card. While his frame still suffers from the simultaneous blessing and curse of ridiculous proportions, he has managed to add plenty of mass to it but still has some ways to go. Usually for a gentlemen of his height and stature, the most glaring complaint would be a lack in leg mass to create enough sweep to balance out the length of his limbs (he does still need to add size, mind you)…that hasn’t been the case in recent showings. Moen has had extreme troubles achieving the level of conditioning necessary to be successful at the Nationals or USA’s competitive landscape.

In 2013, Moen teamed up with all-star contest prep master Chris “The Technician” Aceto. Widely respected as the go-to guy in terms of bringing bodybuilders in to their contest in top condition, it would seem as though this combination would be the last stone that needed to be turned in order for Gabe to finally bring in a competitive package. Well, things didn’t go quite as planned and what we saw was Moen place out of the top 10 at the NPC USA’s 2013 followed by a strange video essentially claiming Aceto did him wrong and blaming him for the failed showing. There was an air of confidence in his delivery as if he had learned a valuable lesson; That he could reach a new level of success by truly learning his own body and he didn’t need to be told what to eat and when to eat it. It didn’t take long for Chris Aceto to reply, and his response can be summarized as this; He was in town for several days leading up to the contest and was hoping to see Moen several times a day as he does with all of his clients, to make adjustments leading into the show. Gabe was nowhere to be found and didn’t make the arrangements to visit Chris and ultimately it was his decision to not come see him. After seeing this rebuttal, Moen offered this very differently toned reply –

“I didn’t mean to offend my coach but looks like I was a total shit show of emotions and I still hadn’t had the chance to speak with Chris about everything. He is 100% correct about everything he said and I take full responsibility for my words. I was a fucking mess totally distraught when I did this interview. I pray that Chris shows mercy and keeps me on the team because I need him and wouldn’t be where I am without him. I had the chance to talk with Chris after this God damn interview of spewing emotions and he fixed me as a coach should be able to. Chris Aceto is the best coach that I have ever had the luck to work with and Chris if you see this PLEASE PLEASE PLEASE forgive me for whatever part of this emotional video made you upset. Team Technatron I hope…. Im so fucked !!!”

Quite a strange sequence of events, and while there was some aftermath of people calling Moen’s ability to control his emotions into question, it was generally forgotten over the course of the off-season and into prep for the following year. It was announced that this year he had teamed up with a new coach in Matt Porter, who had quickly shot up the ranks to become one of the most highly respected contest prep advisors. Porter had yet to publicly train many athletes with the name recognition of Gabe Moen, as he was mostly known for helping lower ranked amateurs achieve insane levels of conditioning on a very consistent basis (and also rising to the national level as a growing bodybuilder in his own right). There was excitement behind this new found team, as like goldfish we tend to forget so quickly what had happened the year prior. Moen posted regular updates throughout the off-season and beginning of prep looking as good as he ever had, maintaining fullness and a leaner appearance than usual.

Moen showed up looking only marginally better (enough to move up to second callout) but ultimately unchanged in the grand scheme of things. History chose to repeat himself, and it wasn’t long before a few posts popped up on his social media pages claiming that no one knows his body like himself and a man of his size needs to EAT. How someone who hasn’t been in shape in recent memory can somehow justify that they needed to be eating more food is a sign that Mr.Moen might simply not be willing to suffer in the ways that his competition is.

Fast forward a few weeks post USA’s performance and Gabe is recreating his last years statements but with even more exaggeration; His prep coach had let him down again, and he knows what he has to do with his own diet. He goes on to basically criticize the entire concept of hiring a coach, and claims he spent $20,000 on his contest prep (if you spending even 1/3 that amount, you need to re-evaluate many facets of your bodybuilding approach and probably learn how to manage your money as an adult)…just to be let down by his “guru”.

So how is that two of the best coaches in bodybuilding today – one from yesterdays generation and the best of today’s up and comers – have both had nearly flawless relationships with all of their clients, yet both have greatly disappointed one mutual one? Moen is sponsored by Mutant who are known to be very kind to their athletes despite contest placings, but I don’t think public behaviour like this is good for any business. Let’s call a spade a spade – He is not listening to the advice of the brightest minds in the industry who he has at his disposal and then in turn is blaming them for his mistakes. One should consider themselves extremely lucky to have a sponsor as a national competitor who seemingly can’t advance into the first callout, as well as having been accepted as a client to two bright minds in the first place.

It’s safe to say this is not the way to increase ones fan base, and time will tell if any other coaches are willing to accept the baggage when he decides he needs help again.