Exclusive contracts…Are they holding us back? 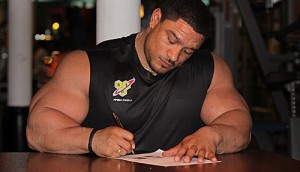 Imagine if we had to flip around 4 or 5 different channels on TV just to hear interviews and content from your favorite professional athletes after the SAME game. It’s Sunday, all the games of the day are done, but instead of being able to leave ESPN on loop to catch all the action, you have to simultaneously monitor several different networks to pick up tidbits from different players because they all signed exclusive deals with the media outlets of their choosing that say a big huge “No” to speaking with the enemies.

It sounds kind of ludicrous, doesn’t it? It would bring nothing positive to the sport, would greatly limit exposure to certain athletes and their fans would have to choose which outlet to support at specific times and ultimately miss out on seeing some of their favorites.

Well, welcome to bodybuilding. It basically all started for us with Joe Weider as he was the first true pioneer in the muscle magazine world. At the time there was not really any competition to speak of, which made the contracts he offered to popular bodybuilders an almost strictly positive experience. Since the contracts were based around offering (although notoriously low-balled) salaries to bodybuilders in exchange for appearances in the pages of magazines and at events, they truly were beneficial to bodybuilders as they got paid (slightly) while getting exposed to a wider audience. Getting into the Weider mags was truly the only way to ‘make it’ back then as the alternative was to be unknown to the public and disappear back out of the eyes of the fans after every competition.

Towards the end of the century the climate of bodybuilding media changed. In the early 2000’s there were several magazines battling with each other, and we slowly saw the nature of contracts transfer from “see XYZ here!” to “don’t see XYZ anywhere else!”. Magazines began signing people more so to forbid them from being featured in other publications than to give them publicity. Eventually, towards the end of the first decade of the century we were left with two goliath magazine empires essentially battling each other in a game of who can hoard the most bodybuilders. Muscular Development and Flex systematically swallowed up the A-list of the IFBB and even NPC in efforts of trying to prevent “their” athletes from being featured in the opposing rag.

This worked for several years as one could easily just pick up both magazines, but as the internet quickly rose to revolutionize the entire landscape of bodybuilding media it became a problematic system. Unsigned bodybuilders were now capable of generating their own content and through facets like YouTube and other social media website could reach huge audiences and essentially build their fan base with their own hands. The mask that bodybuilding was wearing was chipped away one piece at a time, and we were no longer stuck with reading “Jay Cutlers pec splitting chest workout” and force fed repetitive bullshit. We could see bodybuilders in their natural habitat; Shopping, cooking, training, doing cardio, working, and lifestyle videos gave us a much more personal look at the men behind the muscle. So what did the magazines do to address the dichotomy in the rogue online media and their old fashioned ghost written dribble? Well, nothing really.

There is countless cases where an extremely popular bodybuilder who has built up a large fan base through blue collar efforts online goes on to get scooped up in an exclusive contract with a big media publication only to now be forced out of the eyes of fans. Our current crop of talent all grew up idolizing the bodybuilders of the yesteryear who were plastered all over their favorite muscle magazine, so it’s no surprise most of them jump fully on board when they get the opportunity to follow in their footsteps. But is it truly beneficial in today’s media environment? Is giving up your right to speak to the dozens of independent bodybuilding websites on the internet worth the few prep videos and possible Q&A in the back of the latest print issue collecting dust at Publix? Sky’s the limit in this age of social media when it comes to self-promotion and someone with the personality to match the aggressive online presence can really create a lot of opportunities for his or herself.

The concept of exclusivity within the world of bodybuilding simply doesn’t make sense anymore, and it lends itself to buying up talent to sit on the shelf just so the opposition can’t talk to them. Does that sound like a smart way to promote bodybuilding? It doesn’t to me. One could argue that they are being paid and that is all that matters as dollars are not easy to come by in the bodybuilding world, but this is really only relevant to the ones who lack the business mind and/or personality to capitalize on the tools at their disposal. Personally, I would like to see exclusivity be a thing of the past, and let the media outlets fight for your attention through providing the best content. Instead of forcing readers to read your interview with Kai Greene via it being the ONLY interview with Kai Greene, possibly you could earn the viewership through providing the BEST interview with Kai Greene. Everyone would be forced to advance in creativity and find ways to bring the entire world of the bodybuilding media forward. The media is for the fans, and using bodybuilders as ransom benefits nobody. Imagine the content they could create with all the thousands of dollars they spend just to stop an athlete from talking to somebody else…Maybe one day.