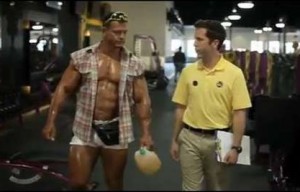 The false assumption that bodybuilders are “dumb” more than likely stems from two different places. These two places being insecurity and jealousy. It is easy to see how a five foot eleven inch 250 pound man with single digit body fat levels and a 30 inch waist could make a “normal” man feel insecure about himself. Jealousy, coming from either a man or woman, tends to elicit similar responses as insecurity, being that insecurity is often times the cause of these bouts of jealousy.

The knee-jerk reactions of a jealous person with regards to an impressive bodybuilder generally include, “Yeah but he has a small penis from all the steroids.”, “that is all steroids, he will be dead at 40.” and “He is probably as dumb as a box of rocks.” All three of these accusations, the “dumb” comment in particular, are about as accurate as a snub-nose pistol from the 1920’s.

Make no mistake, there are some seriously dumb bodybuilders out there. Often times a person who possesses stellar physique genetics will coast through life using their body to make friends and succeed. The problem with this physique based life is that these individuals will fail to build a respectable personality and strong mind. This paradox is also seen in beautiful women. Everyone knows a beautiful women who is not the sharpest tool in the shed, possibly even the dullest tool in the shed. There are several reasons why a person could become reasonably successful based almost entirely on being an extremely attractive women or a guy with a naturally great physique.

Unfortunately, interactions with these individuals tend to stick in the minds of the general public like Gorilla Glue, while run-ins with the brilliant bodybuilders get looked over. This is a similar cause and effect to what is seen in the general portrayal of professional athletes. What this means is that hundreds of people can meet a given athlete with the result being a pleasant, respectful encounter and little fuss is made. Whereas if only one person has as a negative experience with this athlete where he or she is rude or angry, the news of this meeting spreads like wildfire, significantly tarnishing this athletes reputation. All of these positive reflections are simply expected of the athlete, while the very few negative examples garner significant negative emotions from the fans. Bodybuilding fans tend to sway their opinion one way or another in a drastic fashion due to the personal connection that is often times felt between a fan and a high level bodybuilder, a personal connection not always seen in other sports.

Planet Fitness, more accurately referred to here as Planet Fatness, has created an entire company off of peoples insecurities. This is done with a basic slogan of “Do not worry, we do our best to not allow hot woman or jacked men through our doors, so your fat sloppy ass will never feel uncomfortable.” They pitch this pathetic business model through openly condescending television commercials, as well as serving junk food at the gyms on a daily basis and not allowing members to lift “too much weight”. As stomach turning as this business plan is, it is a brilliant one. Planet Fatness is fully aware of the jealousy and insecurity that runs through a large portion of the population in regards to men and women who are in fantastic shape. Creating a false portrayal of bodybuilders is a must in this particular business situation. Imagine if Planet Fatness ads told the truth about bodybuilders? “We discourage any person who routinely reaches his or her goals, are consistent with their diet and exercise, and can be proud of what they have accomplished all on there own”. This statement is really a mirror image of what Planet Fatness is projecting. Delivered in this manner however, it would probably draw in far less pizza and Tootsie-Roll loving heavyweights, and unfortunately, this demographic of people make up the majority of America.

Nearly all men and women wish to have either more muscle, less fat, or both. Interesting how 95% of these people are unable to accomplish these goals, while all the “dumb” bodybuilders do it in stride day after day, week after week, and year after year. Many professionals in the health and nutrition community are also incapable of changing their body composition in the direction which they want. From a purely superficial standpoint, it is obvious that bodybuilders are much more intelligent when it comes to implementing nutrition and workout knowledge than any other demographic of people. There are several other important factors that go into looking like an impressive bodybuilder outside of nutrition and fitness knowledge, making this superficial example not 100% conclusive. Luckily for the bodybuilding community, this physical example is only one example of why bodybuilders are the cream of the crop when it comes to knowledge in these topics.

Bodybuilders are also some of the greatest, most high-end personal trainers on the planet, and possess an uncanny ability to come back from horrendous injuries that would leave most normal people unable to ever walk again. Men like John Meadows, Chris Aceto, Chad Nichols, Dave Palumbo, Stan McQuay, etc. are the best trainers on earth more times than not. All of these men are, or at least were bodybuilders, and come 100% from bodybuilding. All of these “dumb bodybuilders” have trained excessively famous individuals who have access to any trainer in the world, but opt for these big dumb meat heads, how fascinating! No demographic of people are able to apply nutrition and training knowledge like bodybuilders. Knowing the facts is one thing, being able to apply these facts and get others to apply them is a whole other story, and this is where bodybuilders truly shine.

Everyone knows of a person who has had a bad accident or sickness and has never been the same person physically or mentally again. Lack of success at coming back from devastating injuries or sickness obviously goes far beyond training and nutrition knowledge. Nonetheless, training and nutrition knowledge are absolutely imperative to a persons success who is attempting to continue on after a major setback. Two prime examples of the many seemingly impossible comebacks in the bodybuilding industry include Flex Wheeler and Frank McGrath. Both of these men were in awful car accidents in which based on common logic, they should never have survived. Frank and Flex were both told by doctors that they would never walk again, let alone train or compete. Long story short, both men not only walked and trained again, but they returned to bodybuilding competition at its absolute highest level, the Mr Olympia stage.

There is no doubt that many bodybuilders lack good personalities and/or a high level of intelligence. However there are even more bodybuilders who have a wealth of knowledge in their field that goes far beyond what most people can imagine. The underlying issue on the topic of bodybuilders being dumb is really insecurity and is perpetuated by negative people who are unsatisfied with their own lives. Even if bodybuilders were in fact dumb drug addicts, harping on it and ridiculing them will not help you succeed personally, nor will these negative comments stop or persuade bodybuilders to change their ways. You may not like how a bodybuilder looks or how they choose to live their life, but at least they are doing what they love and making progress towards a goal, which is more than can be said for the majority of those who criticize them.