Drugs – If it Worked Then it Will Work Now 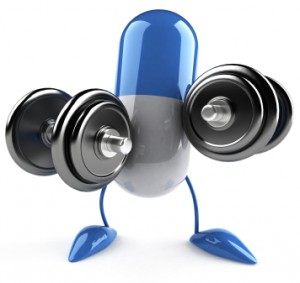 Modern bodybuilding would not be what it is without drugs. We all know that. The extended laundry list of substances that can (and are often) utilized by competitors and gym rats alike sound more and more like the ingredient list on a pack of Marlboro’s every year. Just check the main page of any steroid based forum or chemical enhancement sub-section and you will see people fishing for results from the latest super drug. The bag of magic tricks gets deeper and bigger constantly, but do the physiques?

It seems almost comical how redundant the minds of the voodoo-seeking masses are. Conversations like this are happening on a near daily basis…

User A – “Didn’t get results I wanted from Primobolan”
User B – “That’s because you have to use the Acetate ester, or else it’s pointless”
User A – “Shit, do you have a source????”
User C – “Yeah my buddy blew up off Primo Ace”

The mind frame that is capable of assuming that an absolutely insignificant change in their chemical regime is going to take them from ZERO results to their ripped dream physique is flawed, and you could tell these types that injecting a box of Borax into the outer head of their biceps will add an inch to their arms and they will be quick to flush their existing compounds down the shitter.

One fact that makes the whole thing more puzzling is that we have already seen people achieve the greatest physiques the world has ever seen, and we have already seen people surpass what is considered ideal even in regards to professional level competition. We have already seen Markus Ruhl, Nasser El Sonbaty, Greg Kovacs, Jean Pierre Fux, etc. achieve BEYOND maximum development, and all of them achieved it before the internet became available for people to search and distribute the extremely obscure exotic compounds and before several main-stay peptides used by mere gym junkies even existed.

The most sought-after physiques in the history of bodybuilding tend to be split into two separate camps, with the more old school Arnold-era earning their fair share of admirers, and the still appealing but super sized 1990’s look commonly listed as well. When discussing cycles online, people tend to assume someone using Testosterone, Deca, and Dianobol don’t know better, as if they are behind the times and often there will be input that they should add X, Y, Z. However, some of the greatest champions achieved the look that covered magazines using the very “boring” cycles that get classified as archaic in today’s chemical game. Many people refuse to absorb the knowledge that we already know enough to develop huge freaks. The Golden era guys relied on anabolics and plenty of orals, and the 1990’s saw the perfection of growth hormone, insulin, and IGF-1.

Why users are so anxious to spend more money on exotic compounds to build muscle that could easily be saved for contest dieting is beyond me. In my opinion, bang for your buck should be something worth considering when trying to keep yourself in the bodybuilder category without slipping over into just being a drug addict. More and more, we see 190lb recreational bodybuilders using low MG/ML and high cost gear year-round just because they fall for the romantic concept that the basic shit isn’t good enough. And these same guys will be posting on the boards asking people if they have any feedback on the new DICK-1X32 peptide that was shown to reduce myostatin by 7% in some rats.

If someone 30 years ago could become 250lbs of muscle with what was available to them at the time, why can’t you? With all of the “advancements” in OTC supplements and training, in theory we should be able to accomplish what they did with LESS drugs. I honestly believe a lot of it comes down to mindset, and if you are constantly telling yourself that the tools you have today are not good enough, then they won’t be good enough. It’s always looking for tomorrow, always looking for a reason why the circumstances you have in front of you in the present moment are restraining you from your goal. Newsflash – they’re not. The same shit that built muscle in the 70’s will build muscle now. The same compounds that burned fat 20 years ago will burn fat now. Accept that you have everything that your idols had when they accomplished their goals, and go accomplish yours.