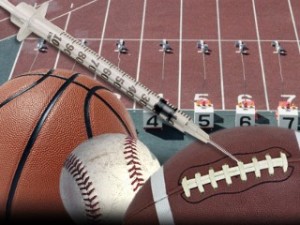 Drug testing in sports was put into place as a way not only catch people using these substances, but also to act as a deterrent for use. Deterrents are exactly that, and the only thing it changes is the method in which people do what they do. It doesn’t stop anything, and if it does, it’s only for a short amount of time.

Performance enhancing drug use in sports is nothing new. The only thing that has changed over the past few decades is the variety of drugs being used. These changes have been brought about due to advancements in medicine and a greater understanding of how the body works and responds to different chemicals.

Drug use in sports dates back thousands of years. In fact, the origin of the word doping comes from the Dutch word ‘droop’, which is an opium juice that was a favorite among Greek athletes in the original Olympic Games. Around 100 AD, Roman gladiators were known for ingesting hallucinogens and stimulants such as strychnine to fight off fatigue and injury, and to improve the intensity of their fights.

Dr John Bosley Zieglar, often called the Godfather of Steroids, created the anabolic steroid Dianabol in 1958. This was a big step in what would change sports forever. It was a big advancement in comparison to the opium juice that had been used by the Greeks over two thousand years before.

Over the next 30 years anabolic steroids remained in sports without much testing. In the MLB it wasn’t tested for until 1991, and at that time testing was very rare.

There was a relaxed steroid policy in professional sports throughout the 90s, and no one was dying of overdoses during competition. On the other hand, many decades earlier, when amphetamines were an athlete’s drugs of choice, people were overdosing and dying during sports competitions. People often refer back to Lyle Alzado when talking about steroids in sports. He became the poster child for people lobbying against steroid use in sports, or use in general. Alzado died of a brain tumor in the early 90s, and before his death he blamed steroid and HGH use for his sickness during numerous interviews. The doctor that administered most of his anabolic steroids and HGH, who was Sylvester Stallone’s doctor, says otherwise.

Steroid use has not actually been shown to cause cancer, but it can accelerate cellular growth. If cancer cells are present, the growth of the cancer is actually accelerated. If steroid use had a disposition for causing cancer, 90 percent of the NFL would have developed the disease by now. People talk about how dangerous anabolic steroids are, but thousands of professional athletes are taking them on a continuous basis.

We have actually seen a drop in sports related deaths since the rise of steroids and fall of amphetamines and other stimulants. This goes to show something, but what has happened since then? The testing has shown an emphasis on steroids on and not on amphetamines. I understand the concept and reasoning behind it. Really I do. There is a lot of pressure from the public and media to crack down on drug use in professional sports, with anabolic steroids being the main target. I don’t agree with it, but it is what it is. With this new testing protocol, things change, and like I said with deterrents, the only thing that changes is the way these drugs are used or what drugs are used. When multi-million dollar paychecks rely on performance, drug use will continue.

These drug-testing protocols that have been put in to place to protect the health of athletes, have actually caused more harm than good. Lets look at a few things; when steroids in sports and the dangers associated with these drugs are discussed, Alzado is always brought up. Why? Because there is no one else that has supposedly died directly from steroid use in sports. Now, there are rumors that Alazdo died from numerous other diseases that could not be associated with steroid use, and his reason for blaming his sickness on steroid use was to cover up a disease other than cancer that he was ashamed of having. I will never know the truth behind this, but I do not believe that steroids caused his death.

We have now passed into the new millennium, and we do have stricter testing in professional sports, or more frequent testing as I call it. Not much has changed as far as the technology with the testing itself. Every agency still runs off of a testosterone versus epitestosterone ratio when testing for steroids. This method is ancient and beatable, but steroids have to be taken at a much lower dose and basically the only steroid that can be taken is testosterone attached to no ester.

When we look back to the 70s and 80s, steroid use was widely used in the NFL and there wasn’t much said about it. It was not unheard of for players to have bottles of Dianabol and other steroids from that era in the locker room. Today testing is done year round in many sports and there is a higher frequency of testing. The method of using steroids during the offseason and cruising through the season is a thing of the past.

With the change in testing over the past decade in sports, athletes have had to change the drugs they use to compete. Like I said before, the drug testing policies are only a deterrent, and it has just changed the way performance enhancing drugs are used instead of stopping the use.

Instead of a large variety of anabolic steroids like trenbolone, nandrolone, and boldenone being used by athletes, they are now using a variety of peptides that are undetectable. Anabolic steroids have been used in humans for over 70 years, and with a lot of documented research. With steroids you know exactly what you are getting as far as side effects go, even with long term use.

The new peptides that are now being used, such as GHRP-6 and CJ1295, have no studies on humans to reference. The doses being used with these peptides have come about by trial and error. It is still unknown what the short term and long term side effects are from these peptides. It is reported that National Rugby League player Jon Mannah’s death from Hodgkin’s Lymphoma may have been accelerated from the use of GHRP-6 and CJ1295. But until some solid research is done, that is just a guess.

The NFL, MLB, and almost every other professional sport in the United States have been pressured by Congress and the media to do something about the widespread drug use in sports. The pressure has caused them to make changes to the testing protocols. These changes have pushed athletes to take drugs that are very questionable when it comes to their safety. Professional athletes compete for a living. It is their job and its how they collect their paychecks. If they can’t compete at the level that everyone else is competing, they will be unemployed. Many athletes do not think about the health problems that could arise from using these new peptides, but instead they are focused on competing at a high level and continuing their high profile careers.

Many feel that the new drug testing policies in sports were put there not only to stop cheating, but also to help protect the player’s safety. Unfortunately, these polices have done quite the opposite. Instead of using steroids, they are now using drugs that could possibly be much more dangerous.