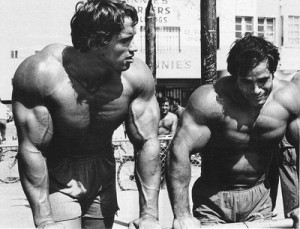 It is not uncommon to hear people say that bodybuilding is a selfish sport. If ones desires to be successful at it, you truly do have to put your needs in first priority before managing a lot of other daily life struggles. While this can be counteracted to a degree with proper planning and preparation, there is no denying that a bodybuilders brain is focused inward and one must truly find what works best for their body on an individual basis.

Being that most of us could agree with all that information, why the hell are bodybuilders so adamant on joining a “side” whenever it comes to any topic in the world of either competitive bodybuilding or training and diet? With all of the information available to us on the internet, it seems strange for people who, in theory, live such independent lives to be so desperate to join a “team” in any debate they can jump in to.

We have seen it for a few years when it comes to the Mr.Olympia competition in the “Phil vs. Kai” saga. Why do you have to be a Phil fan/hater or Kai fan/hater? Can’t you be a fan of bodybuilding and all high level bodybuilders and objectively assess a competition? Aligning yourself to a team is detrimental to the credibility of your opinion. Someone who wants to see Kai win will see Phil look 5% off, and then automatically Kai is the champion in their mind. Someone who is a fan of Heath will probably repeat some cliche about “gotta knock out the champ” or reference Kai’s strange past. Or even worse a Kai fan will use Kai’s incidents as an excuse for why the “powers that be” won’t let him win. Just let them compete, judge their physiques on that day, and form your own thoughts!

It even goes back as far as the 1970/1980’s when Mike Mentzer developed his high intensity training concepts. Popular opinion before then was that training with an extreme amount of volume and high amount of total sets was the best way to develop and shape the body. Although his ideologies definitely progressed to questionable levels, the thought process about training started to change. This was only solidified when Dorian Yates became Mr.Olympia and was vocal about how he was doing much less volume in the gym than most of his competitors. To this day, you will still see threads pop up on bodybuilding message boards asking for peoples opinions on HIT vs volume training. Guess what happens? The guys who enter the discussion with the opinion one way or another tend to leave the discussion (after countless posts bickering back and forth) with the exact same opinion. They have chosen their “team” already and instead of learning or trying something new, their egos will only let them enforce their side.

This stretches to diet as well, and probably strikes up even fiercer debates. The classic low carb vs some carbs vs high carbs vs the world. It would seem that some low carb dieters believe nobody on this planet can lose a single ounce of body fat if they ingest any more than trace carbohydrates in their diet. Insulin is the devil, and anything that could possibly spike it will halt all fat burning efforts and counteract every cardio session. You simply cannot convince many of these people that carbs can be used in a diet aimed at improving body composition. They like to remind you that carbohydrates are non essential…but neither is trenbolone and that tends to help bodybuilders pretty effectively. On the other hand, there are high carb dieters who are afraid to drop their carbs anywhere close to double digits in fear of rapid muscle loss and vanishing into thin air. Catabolism is just around the corner at all times. This battle tends to go hand in hand with the arguments on dietary fat, as they are usually used in opposing fashion on a sliding scale with carbs.

It begins to reach offensive levels of blind follower status when we enter the whole “IIFYM” debacle. I am sick to death of even seeing those initials, so I will just touch on it briefly. Some people are so adamantly opposed to it that they will say things like “I don’t do macro dieting”, without realizing how mind numbingly stupid that statement is. It’s as if these people think macronutrients as a term means using shitty forms of food instead of good ones. They will tell you they don’t do “macros” yet they know the exact weight of each food and how many cups of rice. A lot of them can go on to tell you how many grams of carbs they eat per day…not exactly bright.

Cardio is an absolute must for 95% of us to achieve a low level of body fat. This very basic element of the bodybuilders lifestyle also tends to polarize people in todays scene, as some would have you believe it is somehow outdated and will be right there to mock you if you feel it has any importance at all, regardless of the fact it has been used by thousands of bodybuilders to get in shape for decades. Even if two people agree that cardio plays a vital role in losing unwanted body fat, most likely they will bicker if the cardio should be done at a low intensity for long duration or in short bursts done interval style to maximize effectiveness and stave off muscle loss. Hell, they might even agree on the type of cardio but argue which time of day is the best!

With all the time spent arguing, some of these individuals could personally TRY every different method for his/herself and remove the guess work. Adhering to a team in an argument pretty much guarantees that you won’t accept any new information, and unless you have crafted the perfect physique of your dreams shouldn’t you be open to improvement at any cost, even if it questions what you believe today?