Newer PostMy Favorite PED: Music
Older PostWhey or casein before and after your workout? 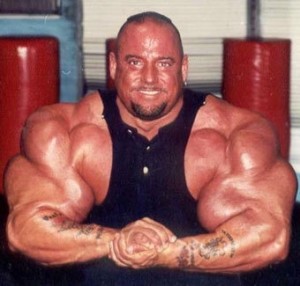 Steroids, Cardiovascular Health, and Reversing the Trend, a Disturbing Trend . As BB’rs, many of us possess a natural propensity for extravagance. For some, the outward manifestation of this trait remains rooted in the achievement of their BB’ing goals, while others find themselves struggling to remain focused on the task at hand, instead succumbing to a lifestyle of destructive excess outside of the gym. While the former are often lauded for their steadfast determination and commitment to their goal, the truth is that they are equally prone to temptations of excess, which frequently finds an outlet in the abuse of performance enhancing drugs.

This is no surprise, as the quest for physical perfection to which BB’rs find themselves subject demands that one push the envelope in nearly every aspect of their lifestyle if maximum progress is desired. With a mental disposition ideally suited to the sport’s requirements, it is little wonder that drug use has continued to escalate over the years. A valid case could be made for this increase in dose over the first few decades, as science has since confirmed that the initial dosages employed by BB’rs did not allow for androgen receptor saturation. However, we eventually reached a point of diminishing returns and then, in an act of ignorance which demonstrated our ill-preparedness to responsibly wield the pharmacological advancements which had become available to us, we surpassed that point and ventured into a realm of unjustified abuse.

It is true that success in this sport carries with it a certain level of chemical risk, yet the degree of risk assumed is largely dependent on our own actions. Proper education leading to the responsible application of PEDs, in combination with routine health monitoring and preventative action, can greatly reduce our likelihood of developing health problems. Unfortunately, many approach this sport with a skewed mental outlook, a type of willful ignorance, if you will, and we are now starting to see the consequences of this type of behavior.

Show me the Bodies

It wasn’t long ago that pro-steroid advocate and writer John Romano, while making a case for steroid safety, pointed out his defense when he succinctly stated “show me the bodies”. Well, we’re now starting to see them. The number of bodybuilding related deaths reached a record high in 2013, with multiple high profile pro BB’rs passing away prematurely. In most cases the cause of death was the same—heart attack. Being the #1 cause of death in America for decades, cardiovascular disease is certainly nothing new, but when an unusually high percentage of people within a particular demographic begin having heart attacks in their 30’s-40‘s, especially when this population is exposed to lifestyle factors which are generally accepted as conducive to good cardiovascular health (regular exercise & healthy eating), one cannot help but point the finger at the obvious culprit.

While the names above are recognizable to most BB’ing fans due to their semi-celebrity status, they do not adequately represent the vast number of amateur and non-competitive BB’rs who have succumbed to the same fate over the last several years. If we include both competitive and non-competitive strength athlete among this total, the number rises even higher.

It would be foolish to suggest that steroids alone are to blame, as the excessive bodyweight many of these individuals carry no doubt played a role in their untimely demise. Neither can we deny a potential genetic component in any of these cases. However, it is well known that AAS use can lead to side effects which are potentially injurious to one’s cardiovascular health. These include increased blood pressure, an altered lipid profile, and elevated hematocrit. In addition, steroids may cause cardiomegaly (an enlarged heart), as well as impaired cardiac function.

Blood pressure is defined as the force of blood against artery walls. When this pressure rises outside of a normal range and remains elevated we are said to have high blood pressure, or hypertension. This causes the heart to work harder to pump an equivalent amount of blood throughout the body. As the condition progresses the oxygen carrying capacity of the arteries is diminished, leading to the potential development of atherosclerosis and increasing the risk of heart disease, congestive heart failure, kidney disease, heart attack, and stroke.

According to the medical community, Stage 1 hypertension is officially defined as any reading over 140/90. Stage 2 hypertension begins at 160/90 and is much more serious than Stage 1. Entry into Stage 1 is very common among AAS users and generally speaking, it is not cause for alarm under normal circumstances. However, it should serve as notice to stay vigilant and if necessary, steps should be taken to prevent a further increase.

Hematocrit, also known as PCV (packed-cell volume), is the concentration of red blood cells in the blood. The higher hematocrit is, the greater the percentage of red blood cells in the blood, while lower hematocrit levels signify a lower percentage of red blood cells. If hematocrit rises outside of the normal range (a condition known as polycythaemia) the blood becomes too thick, causing circulatory difficulties that may result in blood clotting issues, stroke, and heart disease.
With RBC’s being responsible for the delivery of oxygen, one might assume that a higher hematocrit level would necessarily lead to greater oxygenation of body tissues. However, this is not always the case. As the blood’s viscosity increases, especially beyond a certain point, it moves more sluggishly, which may prevent body tissues from receiving as much oxygen as they would with a more normal RBC count.

Lipids are fat-like substances necessary for normal physiological functioning in human beings. They are responsible for the repair of cell membranes, the formation of hormones, the creation of bile salts, and other functions. There are 3 primary components which make up our lipid profile. They are LDL cholesterol (bad cholesterol), HDL cholesterol (good cholesterol), and triglycerides. When LDL cholesterol levels become elevated, cholesterol is deposited on the walls of arteries and forms a hard substance called plaque. If steps are not taken to reverse this process, the arteries will continue to get narrower and narrower, decreasing overall blood flow and causing a condition known as atherosclerosis (commonly referred to as “hardening of the arteries).

Eventually, atherosclerosis may affect the coronary arteries (the blood vessels that supply oxygen to the heart) to the point where the heart is no longer able to receive adequate oxygen. This is called coronary artery disease and is the most common cause of heart attack. When this condition affects the brain it is known as cerebral vascular disease, which is associated with an increased risk of stroke.