Bodybuilding: Online versus in the Flesh 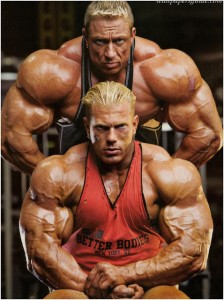 The bodybuilding world seemingly has two entirely separate communities that at times seem almost clueless of the other’s existence and importance. In the first batch, we have the people who are involved actively at the contests and are involved with the local scene and surround themselves with people who are similarly involved. They talk to people at the gym about who is going to be in the upcoming shows and who will be moving up the ranks etc. While they are very likely aware of who is doing what in the IFBB they quite possibly are not “in the know” about the daily gossip amongst the top professionals on a global level.

Then in the other camp, we have the bodybuilding fan who is completely immersed in the online forums and who has already gone to the boards to talk about how Kai Greene looks behind in his prep judging from the 4 seconds of a half covered arm that was on display in his instagram video that was uploaded 13 minutes ago. This type of fan has two breeds itself; There are the ones who walk the walk and are legitimately dedicated and passionate fans who just seem to be more comfortable blending in with the anonymity of the online world, and there is the more useless kind that tend to belong to the websites strictly to judge and criticize yet have zero involvement with the bodybuilding industry in any personal matter.

It is strange in some ways that someone can belong to one community in a very notorious fashion (positive or negative) but be virtually unknown to the other. It’s very common to be a “legend” on the forums and widely respected but have your name not even turn a head at the local competition. If you are reading this, it is very likely that names like Dante Trudel, Ken “Skip” Hill, Shelby Starnes, etc are synonymous with an amount of respect and recognition. Now, how many people in the auditorium at the Alberta Provincial Championships will know who these people are? Not an overly high percentage, compared to the online community where knowing the “Key players” is a prerequisite to being allowed to the party.

Conversely, a local trainer who has a minimum of 20 clients in every regional show and is a board member for the governing association of local competition can be virtually unknown to the web, but have their name carry the same weight as a local mob boss in gyms and at contests in their area. Maybe they sit on the judging panel or own the popular supplement store where the local competitors shop and pick up gossip on how their rivals are looking. These people can be an absolute pillar in the bodybuilding community and live and breathe the sport, yet they lack any presence on Youtube and do not have an instagram account.

Personally I would like to see the two worlds collide, so to speak. While I can certainly understand the “ground level” person not wanting to partake in the negativity of the online warzone, I think a merging of the two in general would create a more pleasant atmosphere surrounding the sport. The online people are the ones who need a dose of reality the most, as it is likely they would gain a real perspective on the industry they feel so embedded in (they aren’t) and possibly not be swallowed in negativity all the time. It’s easy to critique a character you watch in training videos but meeting them in the flesh makes you realize these are all just normal people and quickly the exaggerated rumors posted online dissolve into the nonsense they truly are.
If you have never even bought a ticket to a bodybuilding show, can you really justify sitting online and judging everyone who has the balls to actually ENTER one? Get involved.