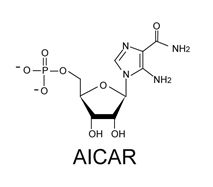 Recent scientific studies have helped the medical community make progress in the treatment of many modern day diseases that were untreatable mere decades ago. Professionals in the medical community have learned that many of the methods used to treat many diseases also have an application in increasing athletic performance. This is how most performance enhancing drugs enter the mainstream bodybuilding community to begin with, as medical studies involving a drug that was intended to treat a disease that showed an ability to increase performance in some way.

A 2008 study involving the substance AIRCAR for treatment of obesity and diabetes showed some very impressive fat-loss and endurance enhancing effects in mice. Before I get into details of the study, I will explain what AIRCAR is and how it works.

AIRCAR, also known as acadesine, is a synthetic adenosine monophosphate (AMP) analog that activates activated protein kinase (AMPK), which plays a role in cellular energy homeostasis; ATP (adenosine triphosphate) is produced by mitochondria as a readily available energy source for chemical processes in the cell. When cells become energy deprived, AMP accumulates. When the cell detects any low energy state from the concentration of AMP present, AMPK is activated. The activation of AMPK increases the conversion of fuel sources, such as fatty acids, into ATP. Activating AMPK causes the same processes to occur that take place when the cell is energy deprived from exercise or low calorie intake. AIRCAR has been shown to be effective at activating AMPK as if exercise was performed, or energy stores were low and fat needed to be burned as fuel.

In 2008, Ronald Evans, a developmental biologist at the Salk Institute in La Jolla, CA was conducting research to find a cure for obesity and diabetes. This research led to a study by Evans using AIRCAR on sedentary mice. These mice were given the drug over a four week period. The mice were then tested on a treadmill and showed a 44% increase in endurance despite not exercising during that time. Another group of sedentary mice were also tested that had not been on the medication. Not surprisingly, there was no change in endurance.

Metabolic and structural changes occur within muscles as a result of endurance training. The study conducted by Evans showed that AICAR can produce muscle reformation, which is influenced by gene expression, increased cellular energy and muscle fiber composition. AICAR showed the ability to transform type -II muscle fibers (which are more common in sedentary people) to type-I muscles in sedentary mice. Type-I muscle tends to use fatty acids as fuel instead of glycogen, which subsequently leads to fat loss. With an abundance of cellular energy-producing mitochondria, this type of muscle is very resistant to fatigue. Type-II muscle fibers, on the other hand, are more prone to fatigue while relying on glycogen instead of fatty acids for fuel.

So, while the mice in the study remained sedentary, they became leaner, stronger, and developed more endurance as a result of AICAR. Can you imagine reaping many of the benefits of exercising without lifting a finger? The study has shown that this drug can achieve this in mice.

At this time AICAR is not FDA approved, but it has worked its way onto the products list of research peptide companies on the internet, which label their products as “not for human consumption.” Before all the lazy Americans get too excited about looking fit without excersing, there is a big down side to AICAR and that is the price tag. AICAR was administered at a dose of 500mg/kg in the research studies that showed a drastic increase in endurance and fat los in mice. A human equivalent to this dosage for a 200 lb man would be 3.2 grams per day, or 64 vials of product, with a cost of $45,000 per month!

It is hard to determine how effective this drug would be in humans, at an appropriate dose. The Evans study showed promising results in rodents, but no clinical trials have been completed on humans. Most performance enhancing drugs have been toyed with by bodybuilders, athletes, and trainers to come up with the most effective dose. But this is not the case with AICAR because it carries such a hefty price tag.

Even though the verdict is not in on whether or not AICAR is beneficial for human use, it is now banned by the World Anti-Doping Agency (WADA.) Evans has also devised a method for detection of AICAR. I am not sure if he did this because he felt that AICAR is in fact effective in humans and could be used to gain an edge in sports or just to shine a spotlight on his research.

The research done with AICAR on mice was shown to be effective in increasing endurance and body composition. In theory, this could be effective in humans that cannot exercise due to a debilitating disease. Nothing has shown to indicate that this drug would increase athletic performance or benefit anyone that already exercises at a high level, as the studies were conducted on sedentary mice only.

This drug may mimic some of the same effects of exercise, but it will never offer all of the benefits of actual exercise. For instance, it will never alleviate stress and tension or give the satisfaction that comes from achieving a personal physical goal. People that don’t exercise, often also, do not eat well. If someone is willing to spend $45,000 per month to replace exercise, I’m sure there are many other shortcuts in their life. This lack of real exercise, poor eating habits and the desire to choose shortcuts will lead to a life of poor health and disease that no drug can cure.

While AICAR has generated quite a buzz on the internet over the past few years, I think this drug is a poor choice, considering the cost and unknown side effects.