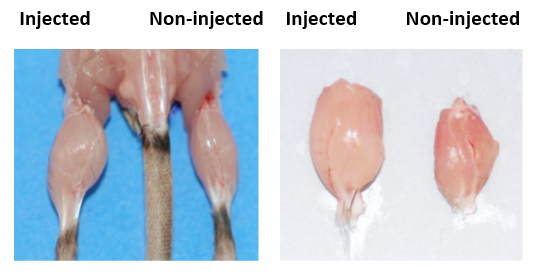 Will this Site Enhancing Wonder Drug Change the Bodybuilding World Forever? After years of immersing myself in the world of PED culture, I have to admit that I have found myself exhibiting decreased levels of interest over every little thing that comes to market. It’s not that I have lost interest in PED’s themselves. If anything, my appreciation for these body, mind, and performance enhancing drugs has only continued to grow, as I realize more fully the extent to which science can potentially benefit us in this area. Rather, it’s the promise that this science brings which has left me a little disappointed with each new development and pondering their true relevance in the bigger picture of our sport’s evolution.

These days, only occasionally do I find myself getting excited over the proposition of a new drug/supplement. Perhaps it’s the lack of originality, with the majority of offerings being nothing more than a copycat or re-hash of what’s already out there. Or, maybe it’s because most of them just don’t have much of an impact on our overall rate of progress, but every now and then I will see something that makes me open my eyes a bit wider; which grabs my attention and causes me to start thinking about the potential applications. The truth is that we are only rarely treated to a PED which has true significance in this sport—that will change the performance enhancing landscape and become an integral component of BB’ing culture.

The last time we saw a drug(s) hold such promise was with the advent of the myostatin inhibitors. Unfortunately, both production costs and difficulties prevented these spectacular drugs from being properly manufactured and sold at optimal dosages. If you were lucky, you would stumble upon a legitimate version of these products, but even if you did find the real thing in unadulterated form, purchasing an amount used in clinical trials was an impossibility for all but the wealthy.

While myostatin inhibitors demonstrated crazy results in animal test subjects, we never did get to see exactly what they were capable of accomplishing in humans. Up until this point, all the Myo I’s previously released were systematic in nature; meaning they affected the entire body. This included ACE-031—a myostatin inhibitor of astonishing potency, but which unfortunately, was never offered to BB’rs at a dosage anywhere close to what was used in clinical studies. Well, Acceleron, the same company which brought us ACE-031, has been hard at work trying to perfect their next new wonder drug—ACE-083.

ACE-083 is different from any drug which has ever come before it, including all other myostatin inhibitors. Unlike the older Myo I’s, ACE-031 is not systematic in nature. Rather, it affects only the muscle/muscle group it is injected into. The first question that comes to mind is bound to be “how well does it work”? I will respond to that by saying that while we don’t yet have any human studies to reference, if this drug works even half as well in humans as it does in animals, it will completely revolutionize the BB’ing landscape unlike any drug which has come before it, AAS withstanding.

What we are looking at here is a super-site enhancement drug which in animals, has been shown to DOUBLE the size of a treated muscle within just 28 days! According to Acceleron, ACE-083 is a “modified cysteine knot ligand trap of the TGFβ super-family”, which works by binding to activins and myostatin, as well as other ligands in the TGFβ super-family, thereby inhibiting their signaling effects. In a 4 week study designed to evaluate ACE- 083’s ability to generate local increases in muscle mass, 6 mice were selected to receive varying dosages of ACE-083, injected into the gastrocnemius muscle, twice weekly for a period of 4 weeks. Dosages ranged from as little as .05 mg/kg up to 15 mg/kg.

Growth rate was dose dependent, with the highest dosage of 15 mg/kg increasing muscle mass by a whopping 95.5% in just 4 weeks. See photo comparison below between the left (treated) and right (non-treated) gastrocnemius. 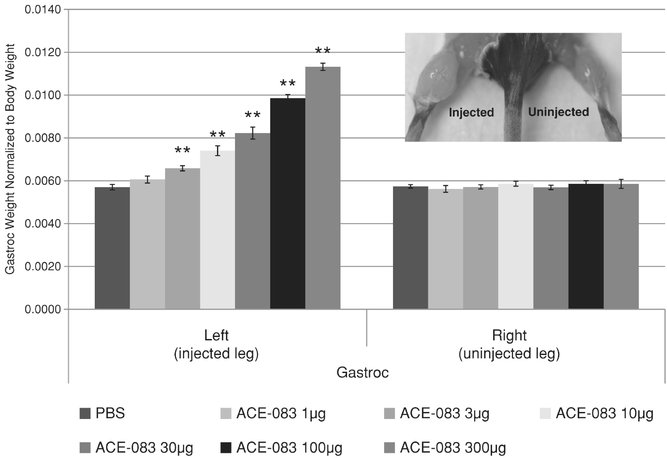 Needless to say, such an increase in muscle mass is beyond what any other current PED is capable of providing. Could you imagine the potential applications of such a drug? Weak bodyparts would be a thing of the past. Freaky bodyparts would become a common occurrence rather than a rarity. The overall size of the BB’r physique would increase dramatically, as many guys would shoot up their entire body to ridiculous proportions. People of all experience levels, from competitive pros to every day gym rats, would be gaining newfound size almost overnight. For many, training would start to lose its relevance, as muscle growth could be had with a simple injection, rather than a combination of hard work and proper dietary habits.

I am getting a bit ahead of myself, as we really don’t know how this stuff will work in humans, but one thing we do know is that animal studies don’t always line up with real-world results in people. Traditionally speaking, animals have tended to respond better to various drug treatments, especially when it comes to muscle growth. Clenbuterol is a prime example. Regardless, chances are good that ACE-083 will work extraordinarily well and as mentioned previously, even if it is only a fraction as effective, it will still be able to produce tremendous results, especially over time.

In order to make sure that ACE-083 was not affecting other muscles of the body, the researchers at Acceleron did not rely on visual assessment alone, but decided to monitor serum FSH levels as further confirmation of their findings. Serum FSH levels remained unaffected. This suggests that systemic activin A was not inhibited and that muscle growth was a strictly local occurrence. Pectoral and femoris muscles were also collected to determine if ACE-083 entered into circulation and affected non-injected muscles. Neither demonstrated a significant increase in size.
Ok, so we know that the effects of this new drug are strictly local, but what type of growth is taking place? In order to answer this question, the researchers analyzed the gastrocnemius muscles for fiber cross-sectional area. The results revealed an extreme increase in muscle fiber hypertrophy. However, muscle hyperplasia was not observed.

We don’t know a whole lot about this compound at the present time. However, I will be sure to report additional information as soon as it becomes available. For now, we can just watch with anticipation as one of the coolest PED’s of all time continues to undergo clinical testing over at Acceleron. Hopefully, this one won’t end up getting scrapped like the rest of the myostatin inhibitors, but will make it through all the rounds of clinical testing on its way to FDA approval.