A Different Look at Food Allergies 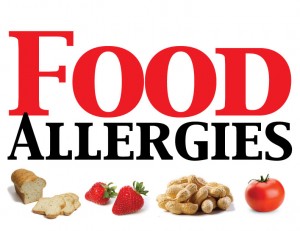 At the risk of being a Debbie Downer, we’re all sick and dying right now at this very moment. Our food supply is shit and our air is bad. Our jobs are sedentary and blood lines are heavily medicated. What’s worse, our bodies are rejecting eggs, wheat, milk, nuts, and fish – yes, even fish! One whiff of a peanut and anaphylactic shock sets in. You better have an epinephrine shot in your man purse or its curtains for you big boy.

Let’s take a look at what an allergy actually is, so we can figure out why we are all a bunch of rotting living corpses. An allergy is an overreaction by the immune system when a foreign body enters its airspace. The reasons some people have allergies and others do not or much milder cases, isn’t due to the pathogen trying to interfere with your day, but instead as a result your own body panicking. This panic releases antibodies, one of them being histamine which causes tightening of the airways. Of course, as athletes we know that it can also create digestive issues.

Studies show that food allergies are a relatively new phenomenon. A study published in JAMA Pediatrics (September 2013 issue) reported that kids’ food allergies cost both families and the US as a whole nearly $25 billion annually. A team of researchers from Northwestern University Feinberg School of Medicine reported in Pediatrics that about 8% of American children have some kind of food allergy. 38.7% of those with food allergies have a history of anaphylaxis (severe allergic reactions), and 30.4% are allergic to more than one food.

What is this telling me? We’re all going to die! Well, eventually anyway, but in more general terms and being that food allergies are a 21st century problem, the food supply is to blame. Before we all jump off a bridge and decide to go all-organic to fend off the allergic reaction to this article, it may not be that easy. If you think today’s vegetables and fruits are of the same nutritious integrity of that of our grandparents, you have another thing coming. The soil has been damaged in such a way over the past 50 years with the boom of agricultural industrialization and farm equipment improvement; coupled with gene manipulation in our crops to enhance growth factors and genetically engineered antibodies spliced into the plants DNA to eliminate bugs and other pests from destroying the budding food. It’s no wonder we’re all hyper sensitive to food. Even our healthy grass-fed beef and buffalo are gnawing on grass from subpar soil.

It’s safe to say that not only are food allergies real, they’re everywhere, and the problem is only going to get worse. So, you’re probably asking, “Blane, what should we do then?” The answer is simple, instead of crying over our lactose intolerant spilled milk, the better strategy is to eliminate these allergen causing foods from our diet, especially the ones that leave you in a lot of discomfort. Of course, since it’s nearly impossible to avoid everything that might make us feel wretched, the better solution is to help speed the process of elimination. We need to push these ill-fated foods through our system as fast as possible so they don’t linger in our bodies and make us sicker, any longer then it has to.

How do we do that? We take our fiber and drink plenty of water. Fiber really is our best friend in the fight against toxins; toxins not only coming from food, but in all aspects of life that could make us unhealthy or cause an allergic reaction. So instead of always being the salmon that is fighting the upstream battle towards its goal, sometimes we have to go with the current, but lead the pack towards the finish line. With that in mind, make smart food choices, but when you must eat something that causes great discomfort; get that poison out of your body as quickly as possible. Take your fiber!