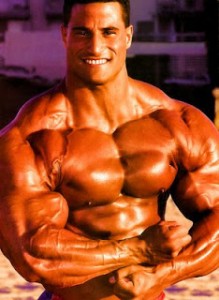 Nothing sets someone apart from the average human being (musculature wise) like a round set of delts. While most muscles can be concealed in clothing and severely downplayed until revealed and undressed, seriously developed deltoids stretch your dimensions and leave no mystery as to whether you spend time in the gym. Coincidentally, it also happens that they are one of the most criminally under developed muscle groups amongst gym rats. How is it that it wouldn’t be top priority to properly train this muscle group and insure progress at all costs? Let’s look at a few things that keep lifters from moving up t-shirt sizes.

1. They focus too much on pressing

I am going to instantly contradict myself a bit and add that developing strength in a shoulder pressing movement is a sure fire way to add mass to your delts….IF your rear delts are up to par. But many people who have issues with unimpressive delts can usually attribute a lot of that to lack of side and rear delt. Unless you are genetically gifted (few are) in the rear deltoid head and get them enough stimulation through training back (few do), I believe a routine focused solely on pressing movements is not going to be the most productive route to big round cannonballs. Pressing movements are fantastic at developing the front head and also at burning out the entire deltoids after a well rounded routine, but on their own they can lead to an imbalanced shoulder region if the rest of your exercises are performed incorrectly or not performed at all.

2. You do laterals incorrectly

Every single day in the gym I see people doing side and rear laterals in a horribly ineffective manner. In fact, I would say it is rare to see someone do them in a way that will actually stimulate the deltoid heads in a productive way, except for bodybuilders who have good delts. There are even some guys who clearly have spent many years in the gym but suffer from sloping shoulder syndrome and it doesn’t make sense…until you see them train. Doing the same incorrect laterals for years and years. First of all, the dumbbell should move against gravity which means it should be lifted UPWARD and away from your body allowing the deltoids to do their job and raise the upper arm. There is no reason for the dumbbell to move backwards as it is no longer moving in the path of most resistance (gravity). Hold the dumbbells to your side or slightly in front of you and pull through your elbows until your upper arm is close to parallel to the floor. The variations I see daily include the bend over mid rep and hurl the dumbbells backward, using traps for 90% of the movement. Or my personal favorite, the “bird rep” where their upper arms stayed glued to their sides and they puff their chest out and basically raise the dumbbells 3 inches diagonally by throwing their hands back while straining their elbows and causing zero stress on any head of anything that matters.

The most important part of a lateral raise is move the upper arm (from shoulder to elbow) against the path of most resistance (directly up against gravity). DO NOT move the dumbbells in any other plane of motion; Angle your BODY against gravity to adjust where the tension is (side or rear head). Pinkies should always stay elevated higher than your thumb and I repeat, pull through your elbows!

This is important for two reasons – A) Having poor posture with your shoulders slumped forward will lead to imbalances and also put you in a position during training where your traps are likely to take the majority of punishment and your poor delts will just stay rolled forward and sad. B) If you keep your back straight and focus on keeping your shoulders back and chest up and forward, you will simply look better by default and it will give your delts a chance to actually show any hard work you have put in. Posture might not be the hottest topic in bodybuilding, but it is integral for proper training form and also a large contributing factor into your overall physical presence. To practice you can stand against a wall with your back firmly pressed against it and make sure your rear deltoids are touching the wall. They should NOT be rolled forward allowing space in between. A good exercise to help with shoulder flexibility is to get into this position then put your arms overhead as if you are doing an imaginary shoulder press, and try to keep your entire arm all the way up to your hand pressed against the wall while raising them upward and simulating a dumbbell press, repeat.