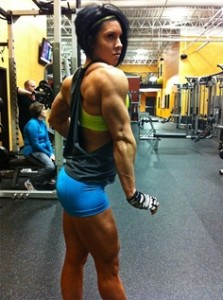 Whether male or female, all of us have an innate desire to look our best. Although often misguided in our efforts, the human race as a whole invests a substantial amount of time, effort, and money into trying to improve its physical appearance. If we are truly honest with ourselves, we will find that none of us is completely satisfied with the way we look. This is especially true for women, upon whom have been laid an inordinate amount of social pressure to conform to certain preconceived images of beauty, as dictated by society.

There are those who, with good intention, fight against this social programming by teaching women that these images are unrealistic and to embrace oneself for who they are. While I agree wholeheartedly with the basic concept of self-acceptance, I believe this movement imparts a sense of powerlessness by inadvertently reinforcing the self-limiting idea that these women do not have the inherent ability to elicit change within their own bodies sufficient to bring their dreams and desires to fruition.

Once robbed of this hope, apathy takes hold as they blindly accept a fate which is unable to sustain a long-term mental or emotional state conducive to ultimate goal realization. Breaking free of this way of thinking is critical; until one sees their goals as being fully attainable, they will be unable to sustain the effort and sacrifice necessary to achieve them at an advanced level. I do not suggest that one should be unreasonable in their expectations or set their goals beyond what their genetic blueprint will allow. However, most women are quite capable of developing a body which far exceeds their current self-imposed limitations.

For those women who have been able to retain or cultivate a belief in their ability to achieve their physique goals, they have at their disposal numerous advantages not available to women of generations past. Much has changed over the last few decades. Nearly every aspect of one’s appearance can now be altered through technology. Things which were once considered socially unacceptable or in conflict with the general moral view have now been widely accepted and integrated into society on a world-wide level; breast implants, Botox, collagen injections, hair transplants, plastic surgery, and liposuction to name a few. Let’s not forget the more mundane beautifiers such as cosmetics, jewelry and other bodily adornments, hair extensions, fake eyelashes, push-ups bras, modern clothing fashion and other stylish accessories and accoutrements.

We live in a world where women willingly augment their appearance is nearly every way conceivable, yet when it comes to improving bodily attractiveness, it seems that the majority of women have missed the boat. For all their knowledge of the above mentioned topics, they seem unable to grasp not only the basic concepts responsible for bringing forth true physical change, but even fewer are educated and/or willing to utilize the legal hormonal and chemical advantages available to them.

While ignorance is an understandable barrier in this instance, I am a bit confounded by those who choose to abstain from these chemical/hormonal advantages, while citing health risk as a point of contention. When the legal argument is removed, this point of view seems hypocritical given that these same people often engage in practices which present an equal or even greater hazard to one’s health.

Call me crazy, but I don’t see how a medical procedure, in which a sharp rod is repeatedly jammed into the fat deposits of hips, buttocks, legs, and stomach, while causing substantial internal injury that takes weeks to recover from, is any less benign than taking a drug which will result in virtually no outwardly discernible or long-term side effects when used responsibly. Using this same logic, I also find it difficult to justify the daily, long-term use of high-powered stimulants, which most certainly carries with it a more serious risk of physical harm than chemical/hormonal alternatives.
Perhaps the close association between these chemical/hormonal products and anabolic steroids is the source of disapproval for some women. With all the misinformation and negative media attention surrounding AAS, any class of drugs even remotely related would likely be met with the same degree of aversion. This is understandable. However, one can rest assured that this new class of drugs is capable of yielding astonishing results without compromising femininity.

Before one can appreciate what these compounds bring to the table, they must first be made aware of the mechanisms responsible for bringing about true bodily change. Many women have been brainwashed into believing that bodyfat management is the all-important key to achieving physical transformation, which in turn leads to an overreliance on cardiovascular exercise. While excess bodyfat can certainly destroy one’s appearance, the removal of such will only alter the physique on a superficial level. If one wants to mold the body’s underlying shape into a form compatible with the female ideal, we must manipulate the muscular system. There is no way around this; as it is the muscular system, along with female fat pattern distribution, which is responsible for determining the shape of a woman’s figure.

No matter how far away we are from our version of the perfect physique, there is no denying that our hormonal environment plays a key role in determining how quickly we are able to get there. To this end, men have a decisive advantage over their female counterparts, as they naturally produce a greater amount of fat burning and muscle building hormones. Should a female decide to level the playing field by turning to anabolic steroids for assistance, she will quickly find herself at conflict with the masculinizing effects of these drugs, as they can wreak havoc on a woman’s femininity. While intelligent use can significantly minimize this occurrence, it is not completely avoidable and for most women, this is enough to scare them into abstinence.

Fortunately, science has created a new class of drugs which has enabled women to build muscle and burn fat at a rate previously unattainable without the use of anabolic-androgenic steroids, but what makes this class of drugs truly exciting is that they able to accomplish this without imparting any of the androgenic, estrogenic, or progestagenic side effects normally associated with AAS. Known as S.A.R.M.’s (selective androgen receptor modulators), this class of drugs was originally designed to separate the positive and negative effects of anabolic-androgenic steroids. Essentially, the goal was to come up with a pure anabolic; a drug which would positively affect protein synthesis without adversely affecting other areas of the body. In reality, not all S.A.R.M.’s have enjoyed the same degree of clinical success, with initial projects being scrapped due to unfavorable anabolic-androgenic ratios. There is only one S.A.R.M capable of delivering a near pure anabolic effect…and that is Ostarine (also known as Osta RX). Surpassing even the mildest steroids in terms of androgenic impotence, Ostarine is a near perfect muscle building drug for women who are unwilling to compromise their femininity.

Unfortunately, there are still a large number of women out there who falsely believe that weight training, even without the assistance of anabolic aides, will result in an excessively muscled look. It is impossible to lead everyone into the light, but for those women who are able to see beyond the ignorance and embrace the physique altering power of this drug, they will for the first time be freed from the hormonal restraints of womanhood, while maintaining the full beauty of their feminine nature. The best of both worlds is what I would call it.