Where Did All the Women Go? 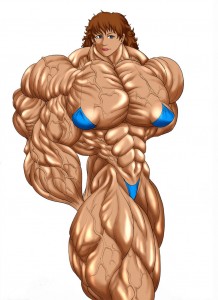 Maybe I’m at the wrong gym or maybe I’m going at all the wrong times, but from my corner of the world it doesn’t seem like women are lifting weights anymore. Now, I’m not talking about our industry women; most of them are lifting hard, even though many still stray off to perform all kinds of high impact plyometrics. I’m talking about your average woman that goes to the gym. I look around and 95% of the open floor space is occupied by guys. Where have all the women gone?

Obviously women are still buying gym memberships, but what are they doing? I usually like to go to the gym on Saturdays around 9 or 10am and I can’t help but notice the group workout room is filled with ladies from their mid-30’s and into their 50’s. They’re dancing and punching and clapping. Most of them are drenched in sweat, but almost none of them are in anything that resembles good shape. The girls that do roam the main gym floor have about as much intensity as my grandma at bingo night down at her church.

Most women at my gym that even attempt to lift spend most of their efforts on legs. After all, they told their trainer during their free PT session on day 1 that they wanted to ‘tone-up’ and not get too bulky. And there they go, blasting away on countless glute machines, abductor and adductor marathons that would make Dave Palumbo proud, and walking lunges. Man, do girls love their walking lunges. Certainly nothing wrong with a lunge, but when you’ve been doing bodyweight lunges for 3 years and still have cellulite on your ass, maybe you should think about holding a pair of dumbbells.

And what is this taboo about women not wanting to bulk up and ah yes, ‘look like a man?’ It’s like a genetic code typed into their DNA from their mothers as a built in excuse not to have hard and productive workouts. Ironically, the same women who don’t want to look like a guy are usually skinny fat and are either dating or married to a guy who has further brainwashed her into thinking muscles are unattractive; this is largely due to his own beer belly, lethargy, and lack of motivation.

And unless you’ve been living under a rock, Crossfit is the fastest growing fitness craze since P90X. I’m not a huge fan of the training methodologies with the high potential risk of injury, but it is no doubt popular—gets girls to lift hard, and teaches intensity. If it’s got major sponsors behind it like Reebok and ESPN promoting a muscular female physique, don’t tell me muscle isn’t a desirable feature on women. Remember, it was only 20 years ago that women used to put shoulder pads into their clothes to give a more pronounced look to their structure. We’ve since moved onto bigger and better options like fake boobs – high-5 for innovation.

So what’s the real story behind women not mixing it up with the guys at the gym? I hear the word “intimidation” thrown around a lot by girls. This one is strange to me when you consider that most of the smaller guys at my gym are weasely little pests and the bigger more muscular guys are often times the nicest people you will ever come across. Big guys almost always have to be nice and friendly because the stereotypes are that big guys are muscle-bound dicks with egos bigger than their biceps. It’s just not true. Plus, factor in that there are many women in the business world that take guys head-on at the boardroom. I’ve been in meetings before when I had the man wrapped around my finger and the women could see right through my bullshit. She was the cause for my back sweat and anxiety, not her male associate.

The other problem is that women don’t like to look stupid. They’re much more inclined to pay a trainer $60 a session or join a step aerobics class than they are to walk around the gym and figure out what to do on their own. Men might be stubborn, but they certainly aren’t afraid to look stupid. I practice my stupidity daily and I’m actually getting quite good at it.
My next logical explanation for a lack of hard training by women is that they have a fear of getting hurt. Hire a trainer, practice on yourself, read a magazine or exercise physiology book, watch YouTube, hell even listen to that Ian kid, but knowledge is the only way you’re ever going to improve on something. Instead of accepting that you don’t know how to do an exercise instead of hiding from a free weight because it looks tricky, problem solve—troubleshoot the issue like any other way you would outside the gym.

To those 5% of women out there who are busting your ass day in and day out, I salute you. To the 80% of guys doing the wrong things I suggest you go back and reread this article again. We all get off track from time to time, but instead of going down the wrong path and into the Zumba room, turn around and head back to the dumbbells. Remember what Henry Rollins once famously said, “The Iron never lies to you. You can walk outside and listen to all kinds of talk, get told that you’re a god or a total bastard. The Iron will always kick you the real deal. The Iron is the great reference point, the all-knowing perspective giver. Always there like a beacon in the pitch black. I have found the Iron to be my greatest friend. It never freaks out on me, never runs. Friends may come and go. But two hundred pounds is always two hundred pounds.”