Top 10 Most Pressing Issues in the Bodybuilding Industry 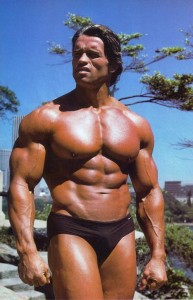 Cool idea Mr. IFBB, with the introduction of the Men’s Physique Division. I see what you guys did there trying to mainstream a non-mainstream-able federation like the IFBB. Not a bad move either, if you ask me. It’s a division sold on something any guy at the gym could try and actually attain. I don’t know about anyone else, but a 26 inch waist isn’t exactly easy. Factor in that you need cool hair, no quads or hams to compete, and muscle, but not too much or you’ll be marked down just spiked my cortisol levels. To be honest, the division had me up until the board shorts. Whose brilliant idea was board shorts in a physique competition? Then there’s the “mandatory” prancing poses – eek. Fortunately the division has hope with a few tweaks in the attire and questionable poses.

Sports and pageants were the first reality TV we’ve all ever known; if Idol, Dancing, and The Voice can get fan participation, then why not bodybuilding too? We’re not talking about rocket science here either folks. The Mr. Olympia and Arnold Classic are the only two Bodybuilding.com livestreams. I find it hard to believe that an online poll, text in vote, or Twitter # isn’t in the realm of possibilities to get the fans more interacted with their sport. It’s not like they would be the deciding factor either—just one giant collective person at the end of the cyber judges panel. Makes sense to me.

Finally, finally, finally, these two guys are starting to place where they belong, with Branch coming in 9th at the Olympia and English 3rd. While I still felt even those finishes were too high for the physiques they brought, it was incredibly refreshing to not see a blatant travesty happen before our eyes. Those who have strong Branch goggles on need to snap back into reality and look at the torn body parts and be objective. Same thing goes for English; unfortunately for him, his fan base isn’t nearly as strong as Warren’s making his slide a little less controversial in the eyes of some.

I think most people out there still don’t know what exactly a guru does. Do they just make workouts, diets, and drug protocols for athletes they’ve never met? Do they teach them something that trial and error otherwise couldn’t have? Did they really earn a masters or Ph.D. in “Gurusciences?” Who the hell really knows? They’re obviously doing something because every bodybuilder that wins something has one and is quick to praise him after a win. Maybe the athletes think that they need a guru in order to play the politics game. Hmm.

There’s really nothing like going to the Arnold Classic or Olympia. The expos are great; having all the athletes under one roof is amazing, and being around 100k people with like-mindedness is just awesome. But if you can’t make it to Columbus or Vegas then your bodybuilding experience really isn’t that much to write home about. Sure the local shows are great and your view of the competitors on stage is incredible, but the experience as a whole has you left wanting more. In a perfect world there would be four mega shows in a calendar year in each section of the country allowing everyone the oversized experience that the Arnold and Mr. O currently is. New York, Atlanta, or Seattle sound like great venues to me!

Of all the good that is coming out of bodybuilding lately there’s just one more division that would round out the federation. What do you do if you’re a tall athlete with a frame too big to fit into those douchey board shorts? Anyone over 6’1’’ would have to be close to 275lb on stage to even have a shot at winning a major title. It’s time we have a division for the tall bodybuilder in the same way the 212 division caters to the vertically challenged. On top of that, I’d be willing to bet guts would be non-existent and conditioning would be second to none. Just a thought from the peanut gallery.

It’s not secret some guys on stage put forth a lot of time in their posing, while other guys freestyle. If bodybuilding is truly an art the way Arnold had always described it, then properly presenting the muscle should be scored once again. I’m not really sure why this part of the show was dropped from the scorecards, but it was, and it’s time it goes back into effect. Think about it this way: The tickets to the finals of a competition are more expensive than the prejudging. Why? Because it’s supposed to be entertaining and if the athletes are judged on their entertainment skills then the show will be better. Makes sense, I know.

There’s really nothing you can do about this next one. Why is it that every person that competes in the NPC or IFBB is a personal trainer, prep coach, or guru? I’m not hating on it since a lot of them make good money in doing so and they get to work for themselves and do what they love, but isn’t it just a little cliché for every guy out there with muscle to be a trainer? Don’t you think it would be better for the sport if we had more accountants, marketing executives, IT specialists, and attorneys? There’s nothing more uninteresting than a guy or girl without depth beyond food prep, sets/reps, and gear.

You ladies have great bodies and for the most part great faces too. You train hard-ish and diet-kinda for weeks on end, so don’t you want to do more than just a few turns and then stick your ass out? The lineups in these divisions are absolutely stacked, most of the time having 30+. It’s the worst time to be an IFBB judge having to decide on these girls. I’d like to see more, maybe an interview segment or even a critical thinking quiz. Plus, for fan enjoyment, wouldn’t it be fun to see some cute little girl on stage with Bob Chic’s microphone down her throat, with metabolic damage trying to discuss things like economic policy or apartheid diamonds in Africa? We all can dream can’t we?

What makes a lot of great bodybuilders is also what really is a downfall to a lot of them – the “me first “attitude—self-absorption and acting as though nothing else on the planet matters besides your training, your food, and your gear; dude, it’s not that serious. You’re a bodybuilder, not an ER doctor.

Newer Post
Can a few hundred mils of caffeine boost the anabolic effect of oxandrolone?
Older Post
Drama or No Drama