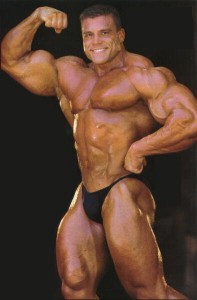 Terri Harris, Greg Kovacs, Mike Jenkins: Three athletes, each having unique backgrounds, dying far too soon. Whatever your discipline – bodybuilding, strongman, or power-lifting—how many more wake-up calls do we need before something changes? Before everyone points a finger at what they think is the obvious cause of death, it’s important to acknowledge that everything we do in physique and strength athletics is based upon stubbornness and extremes. Asking for a change is nice, but rewiring the hard drives in people’s hearts and minds is easier said than done.

The knee jerk reaction most people in our community have when one of our own dies is drugs. We all pretend their safe until someone dies and then it’s World War III. Although I think the drug scapegoat is simply that, it can’t be denied that anything done with extreme doses could be harmful. People have overdosed by drinking too much water and swallowing excess Tylenol, vitamin-C, and ephedra; so it shouldn’t come as a shock when something like diuretics, insulin, Anadrol, or GHB is taken too heavily and a death occurs.

Now, having discussed a bit on drugs there are so many other factors that come into play. Mike Jenkins was 400 HUNDRED POUNDS. All muscle or all fat, it really doesn’t matter as health problems are just around the corner. Nobody has brought up the fact that large men like him are highly likely to have sleep apnea. For anyone that lets sleep apnea go untreated it is literally a ticking time bomb. Of course, his size was also a ticking time bomb on his heart. And who’s to say there wasn’t a genetic predisposition? Oh, and lifting 800 pound tires, squatting 700 pounds regularly, and dragging and pulling raw iron is sure to create havoc on the internal organs. Then there’s the insane amount of food required to actually be 4 bills. I highly doubt there wasn’t a quarter-pounder with cheese in his diet a few times a week. Sadly, nothing about Mike’s life was in moderation.
Terri Harris was another tragic death. Reports were an adverse reaction to diuretics she had used at the Tampa Pro earlier this year. While it’s all speculation, it’s no secret that diuretics are used in bodybuilding. From what I’ve learned by picking some of the top guru’s brains’, is that if properly prepped, diuretics aren’t necessary in most cases, but for those who need them i.e.: Olympia and Arnold Classic competitors, should not use loop diuretics like Lasix or Dyazide, but instead Aldactone. My question is at what point is it really necessary ladies? You don’t make much money, if any, by competing. Whether or not you’re as dry as Phil Heath at a tier 2 show is not something worth dying over. Hopefully this was a wakeup call for the division, but I still have my doubts. After all, bodybuilders, male or female, do nothing in moderation.

And Greg Kovacs, he’s a testament for what can happen if you don’t tone down your lifestyle after the spotlight is long gone. Sadly, Kovacs died last month over a decade after anyone considered him relevant. That said, he still boastfully was seen at shows weighing well over 350 pounds and still having “the look” of someone still pumping mega amounts of gear into his body. That is what we call a chemical imbalance in the brain. It’s one thing to be young and dumb, but to be 45 years old, well into athletic retirement and not easing up off the gas pedal is a recipe for disaster. Who knows what the cause of death was, but it could have been any and everything. Although you can’t predict your mortality, a more sensible lifestyle could have preserved him a little while longer. But then again, he too didn’t do anything in moderation.

If there’s one thing I’m not doing is placing blame on their governing bodies. I’m a big believer in taking personal responsibility. Nobody has a gun to your head and makes you do the things you do. And that goes for all walks of life, no matter what you do as a career or hobby. My question is, why can’t our sports’ athletes be a little more reasonable? It’s not like the NFL, NBA, or MLB where I can actually understand A-Rod or Bonds taking gear to hit homeruns – that makes sense to me. But in sports where you might not win any significant amount of money, to take absurd amounts of drugs, insane amounts of food, lift ridiculous amounts of weight, and to not place a high emphasis on regular checkups from your doctor, boggles my mind.
Maybe it’s just wishful thinking that something will change from the athletes, but to be honest, I doubt it. Whenever you have Type-A personalities, money doesn’t always matter. Common sense is an oxymoron, because it isn’t so common for a lot of people. I just don’t want to see a copious amount of senseless deaths. All of our sports keep getting bigger, but bigger isn’t always better.