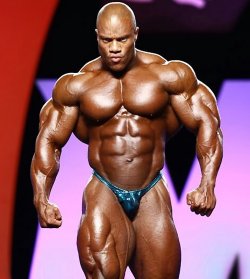 There is a lot to be excited about right now in bodybuilding. We’re on the precipice of arguably the greatest Mr. Olympia contest of all time. Amidst the possible outcome of Phil Heath vying for #3, Jay Cutler is making his return in what could be the last contest in his storied career, and a seemingly endless list of back page stories are in every pro division. But in two weeks, bodybuilding could have a completely new direction and landscape moving forward. Are we prepared for this? More importantly, is bodybuilding prepared for this?

There’s a large consensus amongst industry insiders and fans that someone in the Big 4 will be crowned 2013 Mr. Olympia. For some, a perfect scenario would have Phil Heath retaining or Jay Cutler recapturing the championship. Those same people might be having nightmares with the idea of Kai Greene or Big Ramy taking the title away from one of the two of bodybuilding’s ‘golden boys.’

Fans have been chatting for years that Kai Greene won’t be allowed to ever win a Mr. Olympia contest. While we all beg for a fair and even contest, it’s important to remember that although we would like to view bodybuilding as a sport, it’s simply not. Bodybuilding is male pageantry at its finest with bias, opinion, and, believe it or not, human error. There will always be personal preference when establishing a desirable look. A fair assessment on Kai Greene would be in last year’s contest. For every knock on Heath’s narrow clavicles you could point to Kai’s upper back. Things were just too close to say Kai beat Phil. There are no ties in bodybuilding and, if and when there is the tiebreaker, it must go with the reigning champion.

Although I do believe Kai Greene has been judged properly you can’t argue that fans would see it differently. Does he have a checkered past? Yes. But the way many fans talk about it you would think he’s being judged as a potential presidential candidate. We toss out the phrase, “Ambassador of Bodybuilding,” a lot and to think you have to be squeaky clean to hold that distinction is a bit of stretch. President Clinton got a blow job in his office and we all seemed to move on. There have been dozens upon dozens of leaders in their respective sports or high offices who have been marred by scandal only to have their detractors and critics move on. This isn’t the 1950s; it’s 2013 and if there has ever been a time for an eccentric Mr. O, the time is now.

Big Ramy on the other hand is a different animal all together. Fans and bodybuilding insiders don’t even know his full or real name and if they do nobody seems to ever say it. Just for arguments sake I’ll mention it once—Mamdouh Elssbiay—and then move right back on to his more affectionate and memorable pseudonym, Big Ramy. How can he be the face of bodybuilding when his name has already been forgotten?

Forget about his name for a minute and let’s move onto a more pressing issue. His biggest criticism as a bodybuilder hasn’t been off the stage like Kai Greene, but on the stage. The talk behind Big Ramy is that he needs to refine his physique with more detail and separation. He dominates with size, but many are asking him to come in grainier, dryer, and more detailed. If he were to travel from his desert home in Kuwait to the Olympia’s desert home of Las Vegas and beat not only America’s top 3 bodybuilders, but the world’s top 3 bodybuilders, everything must be perfect. He must come in better than his pro debut in New York.

Even if Ramy can come into the show and knock off everyone with relative ease, he more than likely will not be moving into Dennis James’ crib anytime soon. Ramy is already treated like royalty in his home of Kuwait and with the tag of Mr. Olympia to his name it would certainly elevate him to superstardom throughout his country. Although we have had Mr. Olympians from other parts of the world it has been two decades since The Sandow left America. So that begs the question, can Big Ramy be the new Ambassador of Bodybuilding when he’s not living in the United States or speaking the English language?

I would be hard pressed not to ask the question, what exactly is the title of Mr. Olympia? Is it simply the man holding the best and most desirable bodybuilding physique for two consecutive nights annually at the end of every September or is something more than that? Is it a body of work that you not only present on the stage, but off as well? If Big Ramy does the unthinkable and not only beats Phil Heath, but knocks him out in convincing and unanimous fashion, what does this mean for bodybuilding and are we prepared for the outcome?