Strict vs. Loose Form – When to employ each for maximum results 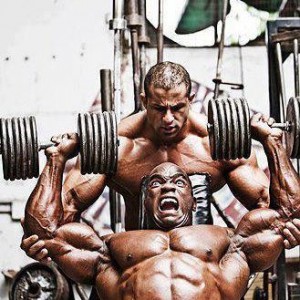 The strict vs. loose form argument is one which goes way back to the beginning of our sport and ever since then, we have seen no shortage of individuals come forward to voice their opinion on the matter. Practitioners of strict form claim that “cheating” (a term used to describe the use of momentum during a lift) reduces muscular tension by bringing other muscles into play in order to help complete the repetition, thereby robbing the target muscle of the stress it should be receiving. Those who adhere to the use of loose form claim that momentum is only employed in order to increase stress on the target muscle…not reduce it. They state that cheating is utilized in order to assist the target muscle in working through the hardest part of the range of motion, where it would normally fail, thereby enabling the lifter to perform additional repetitions before hitting failure and further increasing muscular stress. So, which side is correct? The answer is both and neither.

When approaching the strict vs. loose form debate, many are more worried about arguing their point successfully, than they are about getting to the truth. In reality, the two principles are not in conflict, as both strive towards the same goal, which is to increase stress on the target muscle. Yet, both fall short of this goal as a whole, as they ignore the primary factor responsible for determining whether the use of momentum is beneficial or detrimental. This factor is the strength curve.
In layman’s terms, we can define the strength curve as the amount of resistance encountered at various points during a lift throughout the range of motion. For example, when performing the standing barbell curl without any momentum, we experience comparatively little resistance at both the start and the completion of the lift in comparison to the mid-point, when the lower arms are parallel with the ground. As another example, when performing dumbbell side laterals in the same fashion, the movement starts off relatively easy and continues to increase in difficulty, finally leading to maximum resistance at the top of the exercise. The problem with these uneven strength curves is that it causes failure to occur prematurely, preventing the muscle from being fully over-loaded throughout the entire range of motion. The muscle only experiences failure during the weakest parts of the lift…never throughout the stronger parts of the range of motion.

Every exercise we perform, including free weights and machines, has its own strength curve. The more uneven the strength curve, the less overall stress we can deliver to the target muscle when training strictly. The more even the strength curve is, the less beneficial cheating will be. This is why there is merit to both styles of training and why both can and should be utilized to varying degrees, depending on the exercise. Back in the 1970’s, Arthur Jones was the first man to publically recognize the limitations of traditional free-weight training and propose a solution to overcome it. What followed was the Nautilus line of weight training machines. While they weren’t perfect from a performance standpoint, the idea was valid and far ahead of its time. It would be decades before another manufacturer was able to capitalize on this training advancement and now we have many companies who have built machines which utilize this principle quite effectively. This is why, as the years have gone by, we are hearing less and less about the superiority of free-weights. In previous generations, aside from a few machines which could not be replaced with the use of free-weights, free-weights were largely considered superior. This was due to the poor designs found in most weight training machines of the day. Now, with greatly improved machine design, most BB’rs have come to understand that a combination of both free-weights and machines deliver the best results. For this reason, one is not better than the other (from a general standpoint), but each are able to effectively target the muscle in their own way. This is why we now see the pros using a combination of machines and free-weights in their training programs.

When it comes to properly designed machines, there is little to need to utilize momentum, as the strength curve has already been balanced by the manufacturer. Of course, even the best machines will not work perfectly for every individual, as it is very difficult to design a machine which matches perfectly with everyone’s proportions and leverages. Because of this, each person will need to experiment with the various machines in order to determine which ones conform to their particular body. When it comes to free-weights, we are dealing with an entirely different animal. While some free weight exercises demonstrate a fairly even strength curve, many do not…sometimes excessively so. In order to extract maximum benefit from many free-weight exercises, we will need to utilize at least some momentum in order to overcome the sticking point and over-load the muscle more fully. There is some debate as to whether momentum should be employed right from the start or only at the point during a set in which the muscle can no longer overcome the sticking point, but I digress.

The key to cheating correctly on a free-weight exercise is to supply just enough assistance to overcome the sticking point, but not so much that resistance is removed from the stronger parts of the range of motion. This balancing act can be tricky to learn, especially at first. It requires a strong mind-muscle connection; you must be able to feel exactly what the muscle is doing during a set. Otherwise, you will just be swinging the weight without meaning and would be better off training strictly. I also want to take a second to mention that often, cheating does not involve only the use of momentum, but also changes in body posture. Due to the unique make-up of each individual’s skeletal structure, leverage, and the strength differences of the various muscles between individuals, everyone will need to utilize momentum and body posturing in a slightly different manner if they want to receive maximum benefit. When in doubt regarding how to properly employ cheating during an exercise, revert back to using the pump & pain in the target muscle as a measure of effectiveness. Hopefully, my explanation was at least partially sufficient in revealing the frequent misunderstandings involved in this debate and in showing you how to get maximum results from your efforts in the gym.