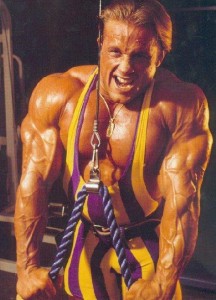 Which training split is the best one? Some say you should train each body part once per week. Others say you have to train twice a week. One camp says stimulate, don’t annihilate, and another camp says you need volume to stretch muscle fascia and force blood to create round muscle bellies. Is it high volume or high intensity? Why can’t it be high volume and high intensity? Do I choose FST-7, Mi40, or Y3T? Ahhhh!!! It’s all so confusing, even advanced guys second guess their training programs. What’s worse, you have to have blind faith in what you’re doing is right, because even the best programming doesn’t yield overnight results.

Coming up, I always read that we were supposed to let the muscle grow out of the gym. We break it down with our training; feed it, then rest it. Give it 3-6 months to marinate and we should, in theory, have new muscle tissue. And then I read a Q&A from a pro bodybuilder, we’ll call him Jose Raymond, and he explains to us that in his last off season he brought up a lagging body part by training it twice a week. So wait a minute. Didn’t I just get the lecture in last month’s magazine on “less is more for growth”, and now a top pro is telling me more is better? Well shit the bed, which is it? It must have been his MHP Dark Matter and Up Your Mass – stack!

Well then I went back and looked at splits. What if, instead of doing 24 sets of back or chest, I split that up and did 8 sets on three separate days of the week? It’s not annihilating the muscle on any one given day, but instead I’m kind of just peppering the target muscle with jabs and hooks instead of going for the knockout. Doggcrapp Training works off of this principle and Mr. Metabolic Genocide, Layne Norton has also spoken extensively about this way of training. It makes a lot of sense to me. The only trouble with this theory on training is the practical side of it. I don’t know how a normal person could do heavy deadlifts on Monday and then turn around on Wednesday and do heavy bent over rows, followed up on Friday by multiple sets of lat pull downs and pull ups. I think a program like this would eventually lead to burnout, but it may work for other more gifted lifters.

The one program that piggy backs this frequency-meets-moderate-intensity approach to training is the High Volume/High Intensity split. One might call it “The Coleman Split.” Two body parts per week, hard, heavy, and with more sets than anyone sane man or woman would ever try and do in a given day. No wonder he ate barbecue sauce a month out from the Olympia. His metabolic furnace had to be burning at light years ahead of everyone else in bodybuilding. Especially, when we would see clips from guys training out in Venice Beach using funky angles, high volume, and low weights. Coleman was a savage, plain and simple.

So what about these low weight, high volume bodybuilders? Is it really just cotton candy muscle inflated by insulin and orals? Ronnie’s muscle bellies sure looked different than Flex Wheeler’s. Kevin Levrone looked much denser than Shawn Ray. And Kai Greene looks grainier than Phil Heath. Even Jay Cutler was criticized much of his career for not having veins throughout his upper body. It could have been genetics, but I have my suspicions.

Here’s the caveat in the discussion. The one trend that the high intensity/high volume bodybuilders have in common with one another is that their bodies have almost entirely self-destructed with tears and injury. The low weight/high volume guys may look a little less freaky, but in most cases, they have been able to outlast their opponents and extended their careers.

In my opinion, the answer lays in the middle. Everybody has to pay their dues. You can’t walk into the gym and start on a low weight and high volume routine and ever expect to have thick and gnarly muscle from all angles. Sure, you might have some lats from the front and back, but what happens when I turn you sideways? Do you disappear? Once you have your base, built on heavy weights, heavy food, and perhaps heavy androgens then you can evolve your training.

And once that base is firmly intact, nature will rear its head, and you may naturally feel the need to lighten the weights and increase the volume. Grinding joints will do that to a person. Once you lower the weight load, then it’s time to play with the blood gorging 7 sets; the multiple muscles per week approach; the odd angles. And this is all necessary, because at the end of the day, nothing builds muscle like heavy weights, unfortunately that doesn’t work forever. Not because the science proves it wrong, but because none of us are invincible. You have to listen to your body and be instinctual – that is the #1 training program of all.