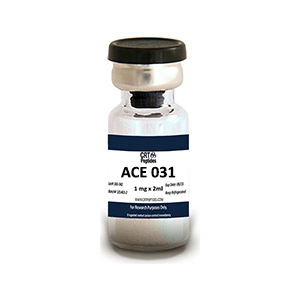 Pharmaceutical companies Acceleron Pharma and Shire have put the myostatin inhibitor ACE-031 on hold. They made an announcement about this in a joint press release recently [acceleronpharma.com May 2, 2013]. A strange development, as a few weeks previously Muscle & Nerve published a study that shows that ACE-031 is stuff that anyone who considers themself to be a chemical bodybuilder would be happy to be able to afford.

If you inject ACE-031 this doesn’t happen at all. The synthetic activin receptor type IIB filters out the muscle inhibiting proteins and deactivates them.

But the single injection did lead to muscle growth. The 3-mg/kg dose led to an increase in muscle of volume of 5 percent, it boosted lean body mass by 3 percent [just over a kilogram], and seemed to also reduce fat mass.

The injection reduced the leptin concentration and boosted that of adiponectin. This would suggest that ACE-031 breaks down fat mass.

Moreover, the myostatin inhibitor boosted the concentration of bone specific alkaline phosphatase [BSAP] in the blood and reduced that of C-terminal type 1 collagen telopeptide [CTX]. This would suggest that ACE-031 strengthens bones. Acceleron has demonstrated these effects in animal studies using RAP-031, the mouse variant of ACE-031. [Endocrinology. 2010 Sep; 151(9): 4289-300.]

If you read the article in Muscle & Nerve you wonder why Acceleron has put the development of ACE-031 on hold. And why it doesn’t declare war on the web-shop owners who happily ignore Acceleron’s patents and sell ACE-031 for prices that no ordinary pharmaceuticals company can compete with.

The answer is in a post on the website of the Muscular Dystrophy Association. [quest.mda.org May 2, 2013] This describes a trial [NCT01099761] performed in 2011 in which researchers gave ACE-031 to children with muscular dystrophy. During the trial side effects emerged and the researchers had to stop the study.

“The adverse events that the trial participants experienced — minor nose and gum bleeding and dilation of blood vessels in the skin — were not, in and of themselves, considered dangerous. However, the companies and regulatory agencies involved say they need to fully understand these events before continuing clinical studies of ACE-031.”

Some other strange side effects also came to light in the study published in Muscle & Nerve. ACE-031 caused the concentration of FSH in the women subjects to plummet. How this happened, and what the effects of this might be, the researchers don’t know.

Research on MYO-029, Wyeth’s myostatin blocker, is not going anywhere either. In 2008 disappointing results of a trial with MYO-029 were published, in which adults with muscular dystrophy gained no strength at all. [Ann Neurol. 2008 May; 63(5): 561-71.] After that Wyeth stopped developing MYO-029.

ACE-031 is a soluble form of activin receptor type IIB (ActRIIB). ACE-031 promotes muscle growth by binding to myostatin and other negative regulators of muscle mass.

Newer Post
The combined effect of taking supplements before, during and after your workout
Older Post
The Doctor Says, Running Will KILL You