Pissing Off a Competitor 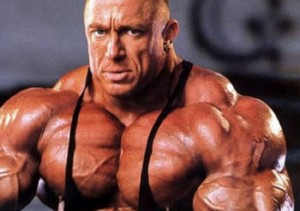 Be humble, show respect, stay classy; we’ve all been preached these things by our parents, coaches, and mentors since we were little kids. I love this one, “act like you’ve been there before,” or my all-time favorite, “don’t give your opponent any billboard material.” But, what’s wrong with playing head games with your competition? What about gamesmanship? Moreover, where’s the fun in sportsmanship? It’s politically correct, but it’s also really boring. Bring on the shit talk I say!

In the past I’ve been critical of bodybuilders for lacking charisma. Now, to be fair, some of them actually have charisma, but feel muzzled by the powers that be. It’s widely known that bodybuilding doesn’t think too kindly of controversy. Shawn Ray didn’t seem to mind talking smack to Dorian Yates.

He had no problem in saying that DY lacked biceps, triceps, or the clean lines that he possessed. There have been a few others throughout the years who were outspoken, but for the most part all pro athletes seem to follow the company line of, “sit down and shut up.”

Up until Nick Trigili fell out of the NPC Nationals this past fall, he had a great back and forth with Kevin Jordan. The two were duking it daily on Facebook, posting pictures, talking trash, and by all accounts appeared to be a true rivalry between two of the best amateur bodybuilders in the world. It was refreshing, yet many in the community thought it should stop. I say, “Carry on boys.” After all, it’s entertainment!

My biggest question, however, is why do people have a problem with this kind shit talking? I’ve always been one to point out the obvious, so why can’t an athlete do the same? Why are we putting these guys on a pedestal just because they happen to be gifted athletes? It seems silly to me that one pro bodybuilder talking crap about another pro bodybuilder would actually be enough to ‘fuel his fire.” If anything, it’s helping to promote the brand of the athlete and market the event. Yay, more money for the promoters and more heads in beds; sounds like a win-win to me.

Floyd “Money” Mayweather is the highest paid athlete in the world, and it’s not because boxing is so popular. It’s simply because the man knows how to market himself and the sport. He’s the most obnoxious athlete in the world; we love him, we hate him, but above all else, we can’t take our eyes off of him. And he takes all of that arrogance, brilliance, and swagger into an annual payday of over $100 million. Am I missing something here do-gooders? Is he not successful, rich, and famous? But, he’s not playing by the proverbial rules of a gentleman. Guess it works for Money, let us not forget, he’s gone undefeated along the way.

I think the answer to my question simply lies with the personality of certain people. Many people just happen to be non-confrontational. Some fight and others flight. Some like drama and others think it’s unnecessary. Some like reality TV and others pretend not to like TV at all. I don’t know about you, but if there’s a fight at the end of the street, I want to go watch. I was the teenager that watched the scrambled porn channel on my pay-per-view TV hoping to catch a glimpse of a boobie.
I’m not saying that one bodybuilder going to the media is actually going to make a difference in the outcome of the contest. Words in MD are not going to make Kai hold extra water on game day. But it might make the sport and the event more interesting. And as long as the critiques or trash talk is honest, where we can all sit back and say, “Yeah, I agree with him on that.” Then it makes for a good debate or argument leading up to the show.

Even still, some bodybuilders get extremely “butt hurt” by a fellow comrade in iron, pushing out his chest and sucking in his gut, on his way to hurting another bodybuilder’s feelings. Is it the low carbs or high dosages of androgens that makes these men weep so easily? Maybe they’re just not dosing their anti-estrogens properly. But above all, I still think it’s an ideology from men long retired from the field of competition whom have something to protect. They’re either protecting the children, protecting their bottom line, or protecting their ability to manipulate the masses. I’ll pick the latter.
Trash talking isn’t for everyone, but it will always exist and should always exist. Carry on boys.