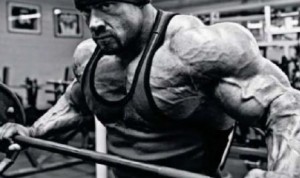 There’s nothing wrong with stretching your muscle groups: it prevents injury and may even speed up muscle growth. But you’re better off avoiding static stretches before starting a training session. Even if you’ve been training for years, you’ll reduce your strength, write researchers at the Universidade Nove de Julho in Brazil in an article soon to be published in the Journal of Strength and Conditioning Research.

You can stretch muscles ‘dynamically’ and ‘statically’. Dynamic stretching involves ‘pumping’: you adopt a stretch pose, then keep on stretching to the point where you feel the stretch in your muscle, and then release it so that the muscle returns quickly to its original length. Then you repeat the procedure. Dynamic stretching boosts performance when done before an explosive training session or during rests between sets.

Static stretching is done by stretching until you feel the stretch in the muscle, and then maintaining that position for a longer amount of time. This way of stretching is safer than dynamic stretching, but if you use it just before a weights or running session then your performance will suffer. The Brazilians examined this aspect in their study.

Most human studies on the effect of stretching used untrained students as the test subjects. But do men and women with years of weight training experience react in the same way? To answer this question the Brazilians performed a small study using 9 untrained [UT] and 11 trained [RT] males in their twenties. The trained men had been doing weight training for six months.

The researchers got their subjects to do static stretches for their chest muscles, upper back muscles, biceps and thigh muscles. They then measured how many kg the men were able to shift just once using these muscle groups, for the bench press, lat pull-down, biceps curl and leg press.

As the table below shows static stretching reduced maximal strength.

Combine strength training with stretching and you’ll get stronger

Doing static stretching before your strength training will decrease the quality of your workout. But that doesn’t mean that static stretching exercises are worthless for strength athletes. Quite the reverse, says sports scientist Joke Kokkonen from the Brigham Young University Hawaii. Kokkonen discovered that strength athletes make more progress by doing stretch exercises on the days that they don’t do strength training.

Let’s just refresh our memories. There are two ways to stretch your muscles: dynamic and static. Dynamic stretching means ‘pumping’ your muscles: you adopt a stretch pose, then keep on gently pushing the stretch to the point where you feel it in your muscle, and then release so that the muscle returns quickly to its original length. This type of stretching improves performance if you use it before or during an explosive training session.

With static stretching you also adopt a stretch pose. You stretch until you feel the stretch in the muscle, and then you maintain that position for a longer amount of time. This type of stretching is safer than dynamic stretching, but if you use it just before a weights or running session then your performance will suffer.

Nevertheless there are animal studies in which rats gained 13 percent more calf muscle mass when the researchers stretched their soleus muscle 3 times a week for a period of 4 weeks. [J Appl Physiol. 1994 Jul; 77(1): 58-62.] What’s more, fundamental research has shown that stretching has much the same effect on muscles as weight training does. Both stretching and training cause minute tears in the muscle tissue – Z-line ruptures – which stimulate the muscle cells to produce growth factors. And these growth factors in turn prompt the manufacture of new muscle fibres.

That’s why Kokkonen decided to do a trial with 16 male and 16 female students, none of whom had ever done weight training.

Kokkonen divided the students into 2 groups. One group trained their leg muscles for 8 weeks. [WT] On Mondays, Wednesdays and Fridays the students went to a gym where they did leg curls, leg extensions and leg presses using a weight at which they could just manage 8 reps. They did 3 sets of each exercise, and rested for 2-3 minutes between sets.

The other group followed exactly the same programme, but on Tuesdays and Thursdays they did leg stretching exercises. [WT+ST] The stretch exercises took 30 minutes to do, and consisted of 15 exercises that covered all the leg muscles.

After 8 weeks there was no difference in bodyweight between the groups. Kokkonen says nothing about body composition.

In the WT group the increase in the 1RM was 86 Newton for the leg extension exercise, 46 for the leg curl and 80 for the leg press. [Divide by ten for the number of kilograms.] In the WT+ST group the figures were 160, 81 and 273 Newton. So the progression in the WT+ST was clearly greater.

We would make one critical remark here about this study: the progression of the WT group is very low. If you have a group of healthy young people who have never done strength training before, and then get them to do leg presses for 8 weeks, how likely is it that their 1RM only increases by 8 kg? This is an improbably low amount. Even if you train like a wet dishrag, it’s still ludicrously low. The progression that the test subjects in the WT+ST group made on the other hand is pretty normal.

If you’re thinking of experimenting with stretch days, just don’t have too high expectations.

Experience in resistance training does not prevent reduction in muscle strength evoked by passive static stretching.

This study examined whether passive static stretching reduces the maximum muscle strength achieved by different body segments in untrained and resistance-trained subjects. Twenty adult men were assigned to one of two groups: untrained (UT, N = 9) and resistance-trained (RT, N = 11). The subjects performed six one-repetition maximum load (1RM) tests of the following exercises: horizontal bench press, lat pull-downs, barbell curls, and 45o leg press. The results achieved in the last two 1RM tests were used for statistical analysis. A passive static stretching program was incorporated prior to the sixth 1RM test. The body fat content was significantly higher in the UT group compared to the RT group (P < 0.0001). Moreover, the RT group showed significantly higher proportion of lean body mass compared to the UT group (P < 0.0001). Maximum muscle strength on all four exercises was significantly reduced in both groups after stretching (P < 0.01). Furthermore, the magnitude of muscle strength reduction was similar for the UT and RT groups. The exception was for barbell curls, in which the muscle strength depression was significantly higher in the UT group compared to RT group (P < 0.0001). In conclusion, the passive static stretching program was detrimental to upper and lower body maximal muscle strength performance in several body segments. The negative effects of stretching were similar for subjects participating in resistance training regimens. PMID: 23207883 [PubMed - as supplied by publisher]