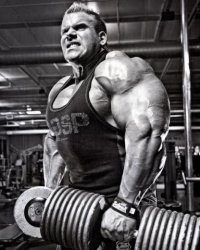 The best post-workout shake doesn’t just contain easily digested proteins like whey and soya protein. Strength athletes will get more out their training session if they drink a protein shake that contains fast and slow proteins, such as casein. Nutritional scientist at the University of Texas at Galveston will publish an article soon on the subject in the Journal of Nutrition.

The researchers got 19 subjects early in their twenties to train their legs on a leg extension machine, doing 8 sets of 10 reps. For the first three sets the subjects used weights at 55, 60 and 65 percent of the weight with which they could just manage 1 rep [the 1RM], for the remaining five sets they used weights at 70 percent of their 1RM.

The researchers took samples of muscle fibre from the subjects’ thigh muscles just before the workout and again four hours after they had finished the workout. They measured the fractional synthetic rate [FSR] – the rate at which muscle fibre protein is produced – in the samples. The researchers also measured the concentration of substances including phenylalanine [an amino acid] and the BCAAs in the subjects’ blood.

That’s not so surprising. Casein is a ‘slow protein’, which is digested slowly and its amino acids only appear in the blood gradually and after a considerable amount of time. Whey is a ‘fast protein’ that is digested quickly and therefore causes a pronounced amino acid peak. Soya protein is also a fast protein, although it’s a little slower than whey.

The protein blend resulted in a stronger increase in muscle fibre protein synthesis than the whey-only protein, the figure above shows.

The study was partly financed by the soya-giant Solae, and partly by the US government.

High-quality proteins such as soy, whey, and casein are all capable of promoting muscle protein synthesis postexercise by activating the mammalian target of rapamycin (mTORC1) signaling pathway. We hypothesized that a protein blend of soy and dairy proteins would capitalize on the unique properties of each individual protein and allow for optimal delivery of amino acids to prolong the fractional synthetic rate (FSR) following resistance exercise (RE). In this double-blind, randomized, clinical trial, 19 young adults were studied before and after ingestion of ∼19 g of protein blend (PB) or ∼18 g whey protein (WP) consumed 1 h after high-intensity leg RE. We examined mixed-muscle protein FSR by stable isotopic methods and mTORC1 signaling with western blotting. Muscle biopsies from the vastus lateralis were collected at rest (before RE) and at 3 postexercise time points during an early (0-2 h) and late (2-4 h) postingestion period. WP ingestion resulted in higher and earlier amplitude of blood BCAA concentrations. PB ingestion created a lower initial rise in blood BCAA but sustained elevated levels of blood amino acids later into recovery (P < 0.05). Postexercise FSR increased equivalently in both groups during the early period (WP, 0.078 ± 0.009%; PB, 0.088 ± 0.007%); however, FSR remained elevated only in the PB group during the late period (WP, 0.074 ± 0.010%; PB, 0.087 ± 0.003%) (P < 0.05). mTORC1 signaling similarly increased between groups, except for no increase in S6K1 phosphorylation in the WP group at 5 h postexercise (P < 0.05). We conclude that a soy-dairy PB ingested following exercise is capable of prolonging blood aminoacidemia, mTORC1 signaling, and protein synthesis in human skeletal muscle and is an effective postexercise nutritional supplement. PMID: 23343671 [PubMed - as supplied by publisher] Source: http://www.ergo-log.com/mix-of-casein-whey-soya-protein-after-strength-training.html