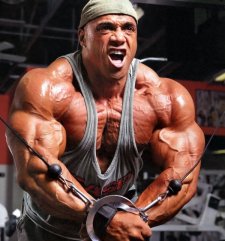 In the experiment that the Italians published in the Journal of the International Society of Sports Nutrition, nine male gymnasts from the Corpo Libero Gymnastics Team ASD functioned as test subjects. They were among the top gymnasts in the country and two of them were on the Italian national team. The men trained for thirty hours a week.

The researchers studied the performance capacity of the gymnasts during two periods of 30 days. During one of the periods the athletes ate ‘normally’. The energy in their diet was derived for about 45 percent from carbohydrates, 40 percent from fat and 15 percent from proteins. The athletes consumed about 2270 kcal per day.

During the other period the athletes were put on a strict very low carb diet. The basic foodstuffs allowed were leafy vegetables, olive oil, fish and meat. Alcohol, bread, pasta, rice, milk and yoghurt (most dairy products contain more carbohydrates than proteins) were forbidden.

In addition the men used low-carb readymade meals from Gianluca Mech. [gianlucamechspa.com] The athletes also took a low-dose multivitamin, also produced by Gianluca Mech. Gianluca Mech helped finance the study, and the first author of the study also works as a consultant for the company.

Before and after each period the researchers tested the performance capacity of the gymnasts. They found no effects. JS = jump squat; CMJ = counter movement jump. 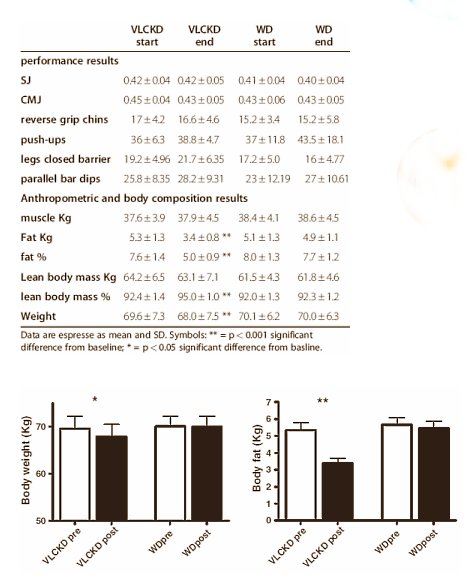 In older studies low carb food has led to a decrease in performance capacity. But in those days researchers didn’t take into account that the body needs a week to get used to a low-carb diet. The Italians didn’t make this mistake.

“Our data suggest that athletes who underwent a very low carbohydrate ketogenic diets with adequate protein intake lost weight and improved body composition without any negative changes in strength and power performance”, the Italians conclude in the last section of their article. “In conclusion, this dietetic approach in the short term could be helpful in sports that involve weight categories.”

Despite the increasing use of very low carbohydrate ketogenic diets (VLCKD) in weight control and management of the metabolic syndrome there is a paucity of research about effects of VLCKD on sport performance. Ketogenic diets may be useful in sports that include weight class divisions and the aim of our study was to investigate the influence of VLCKD on explosive strength performance.

8 athletes, elite artistic gymnasts (age 20.9 ± 5.5 yrs) were recruited. We analyzed body composition and various performance aspects (hanging straight leg raise, ground push up, parallel bar dips, pull up, squat jump, countermovement jump, 30 sec continuous jumps) before and after 30 days of a modified ketogenic diet. The diet was based on green vegetables, olive oil, fish and meat plus dishes composed of high quality protein and virtually zero carbohydrates, but which mimicked their taste, with the addition of some herbal extracts. During the VLCKD the athletes performed the normal training program. After three months the same protocol, tests were performed before and after 30 days of the athletes’ usual diet (a typically western diet, WD). A one-way Anova for repeated measurements was used.

No significant differences were detected between VLCKD and WD in all strength tests. Significant differences were found in body weight and body composition: after VLCKD there was a decrease in body weight (from 69.6 ± 7.3 Kg to 68.0 ± 7.5 Kg) and fat mass (from 5.3 ± 1.3 Kg to 3.4 ± 0.8 Kg p <  0.001) with a non-significant increase in muscle mass. CONCLUSIONS: Despite concerns of coaches and doctors about the possible detrimental effects of low carbohydrate diets on athletic performance and the well known importance of carbohydrates there are no data about VLCKD and strength performance. The undeniable and sudden effect of VLCKD on fat loss may be useful for those athletes who compete in sports based on weight class. We have demonstrated that using VLCKD for a relatively short time period (i.e. 30 days) can decrease body weight and body fat without negative effects on strength performance in high level athletes. PMID: 22835211 [PubMed] PMCID: PMC3411406 Source: http://www.ncbi.nlm.nih.gov/pubmed/22835211